Find this article at:
go.ncsu.edu/readext?521272
— Written By Barclay Poling 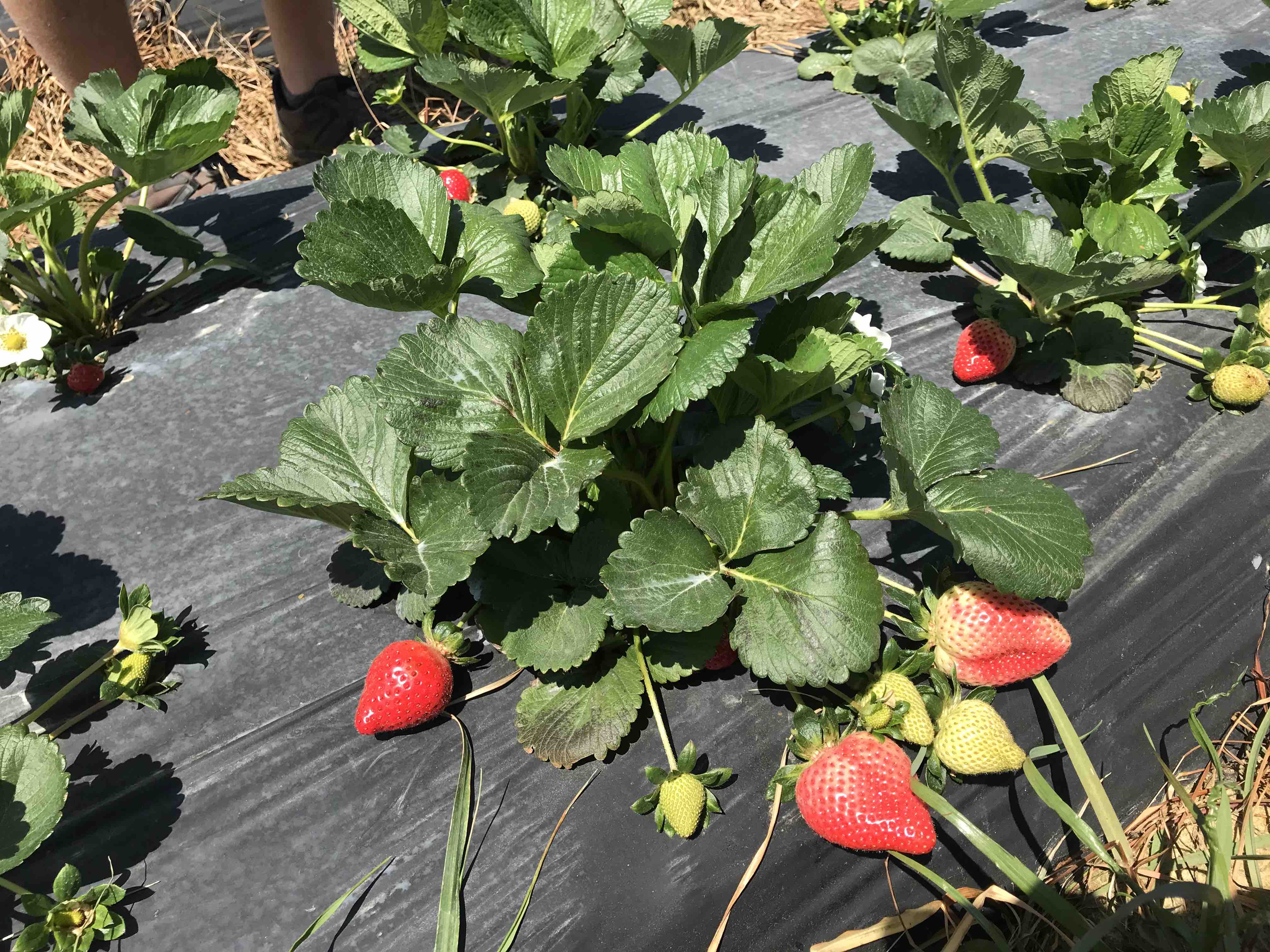 Fig. 1. Berries of Merced are now ripening up in the Piedmont of NC (cut-off plant). Photo by Barclay Poling, April 12, 2018, Greensboro, NC. Poling began working with Merced,  a short day cultivar of the University of CA, in the fall of 2013. In the spring of 2017, it was the 4th highest cultivar in marketable yield in a Strawberry Variety and Advanced Selection trial in Faison, NC (2017 Variety Trial Faison NC). Merced is currently be tested for a second year in Faison. Agents, Agronomists, Growers and Friends of the Industry are invited to a program in Faison on April 24th: Program Tuesday_April 24 2018

After a mild weekend, temperatures drop below normal early to mid week before rising to above normal by late in the week. Expect swings from slightly cooler to slightly warmer than normal over the next two weeks, with overall temperatures on average a bit below the average for the season and precipitation above average. As we near the end of April into early May, it is starting to look like below normal temperatures will persist. There is still plenty of cold air in Canada and it looks like the northern tier states into Canada will remain well below normal into May. A major factor keeping temperatures cool up north is the unusually deep and extensive snow cover across Canada and the northern tier states of the US. But the southern states have been and will continue tend to be above normal. This will continue to create a strong north – south spring temperature gradient to a greater strength than usual for this or anytime of the year. This trend would tend to keep overall temperatures on the cool side from about our forecast region north. The strong gradient will also tend to support an active weather pattern with strong fronts passing through the forecast region every few days. As previously mentioned, it also opens up the possibility of allowing the circulation surrounding one of the storms that develop to tap into the cold air in the north and plunge it rapidly south into the forecast region. Something that needs to be kept alert to regarding the longer term forecasts. It will take a while for the snow in the north to melt. In fact this weekend has seen another major snowstorm sweep through the northern tier states of the US with 1-2 feet of snow falling in some locations. So expect the tendency of generally cooler than normal temperatures to persist in forecast region into at least mid May. The longer range statistical models which do not typically account for the extensive snow cover continue to indicate that May and June will tend to see above normal temperatures. But as the dynamical models come into the forecast mix, at least the first half of May is now looking to be below average. This tendency to be cooler than the long range forecast started in late winter and has persisted into spring and could very well continue into June.

Forecast discussion day 3 – 5   (18 Apr – 20 Apr) Temperatures start the period near or slightly above normal then cool to below normal; scattered showers early in the period.   Expect warm air to move into the forecast area to start the period, but cool significantly as a cold front moves through the region by mid period. Conditions stay mostly dry with only a short period of scattered showers and possible isolated thunderstorm activity early in the forecast period. Precipitation amounts will likely be 0.00 – 0.10” range.

Forecast discussion day 6 – 8:  (21 Apr – 23 Apr) Temperatures start off below normal then warm to slightly above normal all regions; wide spread rain mid period. Expect a low pressure system to move through the forecast area through the period. This will warm temperatures slightly above normal and cause a period of widespread by rain mid  period. Precipitation amounts will likely be in the 0.35 – 0.70” range for most locations.

Forecast discussion day 9 – 11:  (24 Apr – 26 Apr) Temperatures cool to near normal; mostly dry conditions except scattered showers late in regions 1 and 2.  Cooler air moves into the forecast area as a high pressure moves in from the west. Expect a cold front to approach region from the northwest late in the period with scatted showers in northern regions 1 and 2. Precipitation amounts will likely be 0.00 – 0.05” regions 1-3 and 0.0-0.20 in regions 1 and 2.

Forecast discussion day 12 – 14:   (27 Apr – 29 Apr) Temperatures cool to slightly below normal all regions; widespread showers early to mid period. Expect strong cool high pressure system to slowly move through the forecast area during this period. This will drop temperatures to slightly below normal and keep conditions dry all period. Precipitation amounts will likely be in the 0.00 – 0.05” range for all locations. 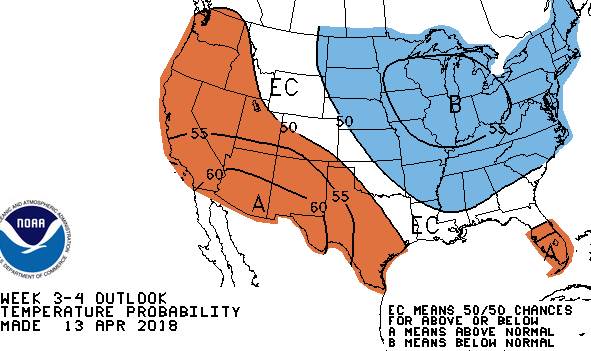 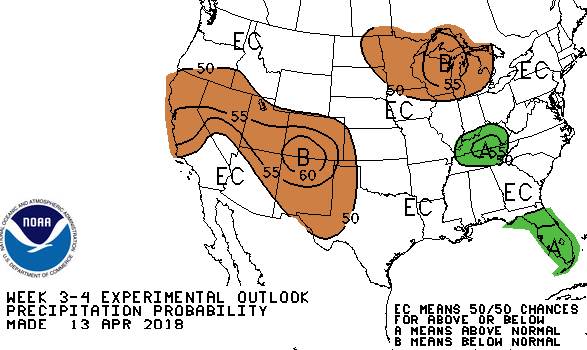 Outlook discussion day 15 – 22:   (30 Apr – 6 May) Early indications are that temperatures will be below normal with the precipitation near the seasonal average.

Outlook discussion day 23 – 30:  (7 May – 13 May) Early indications are that temperatures will also be below normal with the precipitation near the seasonal average.

April, May, June Outlook:    The early indications that temperatures would be above normal are looking less likely now and at best will average out near average after a below normal start to May. Precipitation still looks to be near at or above the seasonal average during May. The long range statistical models still indicate June will be above normal in temperature with precipitation amounts being below average for the forecast region.