The plasticulture strawberry season in N.C. begins in late April to early May and lasts six to eight weeks.
The development of North Carolina’s strawberry plasticulture industry over the last 25 years has been one of the real success stories of a special partnership between land-grant university scientists at N.C. State University and a statewide system of publically supported research stations. Seven of the state’s 18 research stations (located in Castle Hayne, Clayton, Clinton, Fletcher, Jackson Springs, Salisbury and Laurel Springs), have their “footprint” directly on the $25 million strawberry plasticulture industry in North Carolina. The plasticulture production system, also called the “annual hill plastic mulch system,” originated in California and Florida in the 1960s, but was not seriously evaluated in North Carolina until the early 1980s. N.C. State scientists found that the plasticulture method offered several distinct advantages over the traditional matted-row system, including larger fruit size, higher marketable yields and a longer picking season. 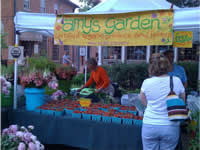 The berries are so much larger in size with this system that pickers can harvest three to four times faster on raised, plastic mulch-covered beds than on lower, matted-row beds. This breakthrough in harvest efficiency has made it possible for North Carolina farmers to compete in a variety of important “pre-pick” markets, including specialty grocers that feature locally grown produce, farmers markets, roadside stands, high-end restaurants and CSAs (Community Supported Agriculture). Of course, customer harvest, also known as U-pick or pick-your-own, is still a popular marketing method for strawberry farms located near cities and towns. But, the proportion of the total crop that can be successfully marketed U-pick relative to pre-pick has changed dramatically in recent years. Today, people are demanding more pre-picked fruit, and the proportion of the crop that is sold U-pick has declined from around 80 percent in the late 1990s, to as little as 20 percent in the late 2000s.

A number of strawberry plasticulture production recommendations have changed over the last decade, and this section of the Strawberry Growers Information Portal provides current information on a full range of plasticulture production-related topics, from variety selection to plant tissue testing and the latest recommendations on row cover management. A number of the changes and improvements in strawberry plasticulture recommendations that have occurred over the last 10 years are largely the outcome of a continuing collaboration between N.C . State University researchers and breeders, the state’s research stations and the Agronomic Division of the N.C. Department of Agriculture & Consumer Services.