In annual hill plasitculture systems, harvest season can last from more than two months (in cooler springs) to only 4-5 weeks (in wet and hot years). While the main cultivars grown in North Carolina in plasticulture systems are Chandler (UC Davis) and Camarosa (UC Davis), over the past few years, a whole range of cultivars seemed to be suitable to our growing conditions. With the two 2019 NC State releases (Rocco and Liz), which are specifically bred for our climate conditions, there is a range of cultivars available for growers to use instead of Camarosa and Chandler.

Please find here a ‘short list’ of cultivars which are found to be acceptable under our conditions.

This list does not include Chandler and Camarosa. Those cultivars are described below (written by Barclay Poling).

Chandler is typically grown for U-pick sales in N.C.

Chandler. This is the standard cultivar for the U-pick producers in North Carolina because of its high yield compared to other plasticulture varieties and because it is well liked by consumers for its good flavor, size and attractive red color. Given its widespread use for U-pick, it should be planted at 14-inch in-row plant spacing for easier customer harvest (for a double-row bed on five-foot center, 14-inch in-row spacing will require 15,000 plants per acre). Plugs and fresh dug, bare-root plants are usually comparable in yield performance for Chandler, but fresh dugs may have an advantage from the standpoint that they do not concentrate the ripening of the crop as much as plugs in some spring seasons. Optimum plug planting dates for Chandler vary with region (fresh dugs should be set three to five days earlier than plugs):

Chandler is quite cold hardy and does not generally require winter protection (straw or row covers) for most growing areas in North Carolina. However, winter temperatures below 10 degrees Fahrenheit will cause extensive flower and crown injury in this variety. For this reason, row covers are strongly recommended for areas where there is a potential for periods of extreme cold in winter (less than 10 degrees Fahrenheit). Based on recent research with row covers in upper mountain areas (elevations higher than 2,500 feet), it has been determined that row covers (1.5 oz per sq yd) applied in late November to early December for additional winter protection and then removed in early March (before new blossoms reach the “popcorn” stage) can significantly improve Chandler yields compared to unprotected plantings. The row covers will also assist with deer protection, and they can be reapplied for cold protection of flower buds and blossoms in late winter to early spring. 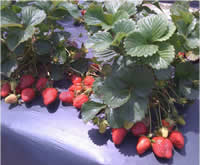 Camarosa is the pre-pick variety of choice in N.C.

Camarosa. Camarosa is primarly grown for pre-pick operations and is gaining popularity as a U-pick variety. Camarosa has superior shelf-life and handling characteristics compared to Chandler. In the warmer winter areas of North Carolina, Camarosa production now surpasses Chandler in acreage. The fruit is very large and firm and holds up well in rainy weather. To achieve the best Camarosa flavor, it is important to delay picking past the glossy bright red stage and to train pickers to harvest Camarosa when it takes on a darker color. However, when it becomes wine-red in color, it is becoming overripe. It is currently believed that the optimum planting dates for Camarosa are about the same time as Chandler, but most growers prefer to set this variety at least three days ahead of Chandler. Camarosa is typically planted at 14-inch in-row plant spacing (for a double-row bed on a five-foot center, 14-inch in-row spacing will require 15,000 plants per acre). Camarosa can really strengthen mid-to-late season sales when Chandler quantity and quality declines as the temperatures increase. This variety is receiving increased attention for its season extending potential.