Find this article at:
go.ncsu.edu/readext?517717
— Written By Barclay Poling

After the period of below normal temperatures early this week, temperatures warm to near to slightly above normal by mid week with temperatures remaining near normal until about April 9 when a cooling trend is expected to begin and last for a week or two through much of April. The primary statistical long-range forecast for April has changed as more recent dynamical model guidance supporting the Week 3-4 outlook is now available. The latest indication from the medium range dynamical models are indicating that a large amplitude slow-moving trough will persist over central North America. So it is now looking like a cold trough is going to continue to dominate central North America, which would allow colder than normal temperatures from the upper Mississippi Valley – Great Lakes region eastward to the Atlantic Coast from Maine to North Carolina for much of April. This pattern would tend to support above average precipitation from the central Mississippi Valley, across the Ohio Valley, into the eastern Great Lakes region, the Northeast and the Mid-Atlantic.The longer range models continue to indicate that May and June will trend to see above normal temperatures with precipitation amounts being about average for the forecast region.
Forecast discussion day 3 – 5   (28 Mar – 30 Mar) Temperatures warm to near to slightly above normal; scattered showers early with widespread showers and scattered thunderstorms mid to late period.  Warmer air moves into the forecast area ahead of a cold front approaching the region from the west. Expect numerous showers and thunderstorms to be ahead of and along the cold front. Precipitation amounts will likely be in the 0.50–0.75” range.

Forecast discussion day 6 – 8:  (31 Mar – 2 Apr) Temperatures cool but stay near normal all regions; very widely scattered showers possible in region 1 late period. Expect a cool high pressure system to move through the forecast area through the period. This will cause clear skies resulting in a  drop in temperatures to near normal during the day with overnight temperatures falling to  slightly below normal (with even a chance for frost in some low lying areas). Expect mostly dry conditions through the period. Precipitation amounts will likely be in the 0.00–0.05” range for most locations.

Forecast discussion day 9 – 11:  (3 Apr – 5 Apr) Temperatures stay near normal; widespread showers and thunderstorms all regions early to mid-period. Expect a warmer air mass to move into the forecast area due to southwest flow ahead of a cold front that is expected to pass through the region mid-period. But expect extensive cloud cover to keep high temperatures about the same as the last period, with nighttime temperatures being slightly warmer. Precipitation amounts will likely be in 0.30– 0.65” range.

Forecast discussion day 12 – 14:   (6 Apr – 8 Apr) Temperatures cool slightly to slightly below normal; widespread showers and scattered thunderstorms mid to late in period. Expect a strong low pressure and frontal system to slowly move through the forecast area through the period. This will keep temperatures cool to slightly below normal and cause periods of widespread rain showers with scattered thunderstorms mid to late in the period. This weather pattern has the possibility of triggering some severe thunderstorms as it moves through the forecast region. Precipitation amounts will likely be in the 0.35 – 0.65” range for most locations. 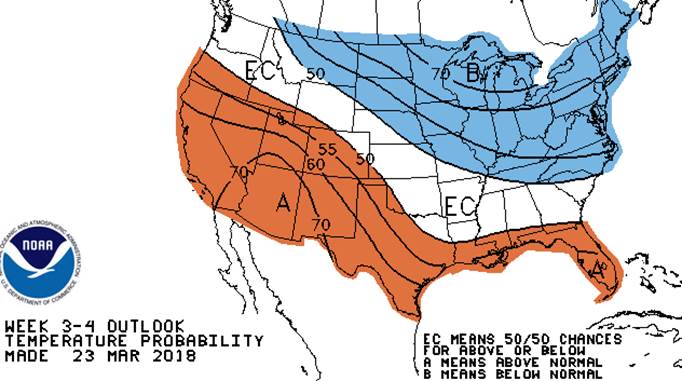 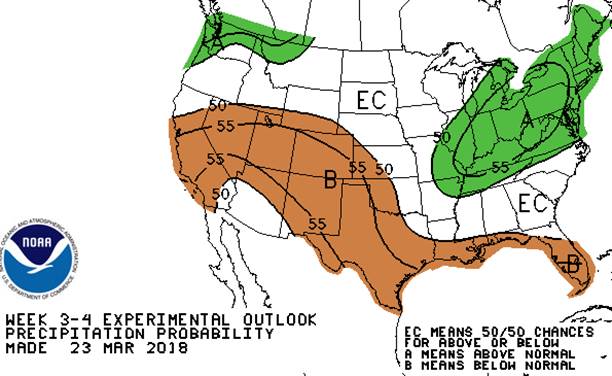