Find this article at:
go.ncsu.edu/readext?519905
— Written By Barclay Poling 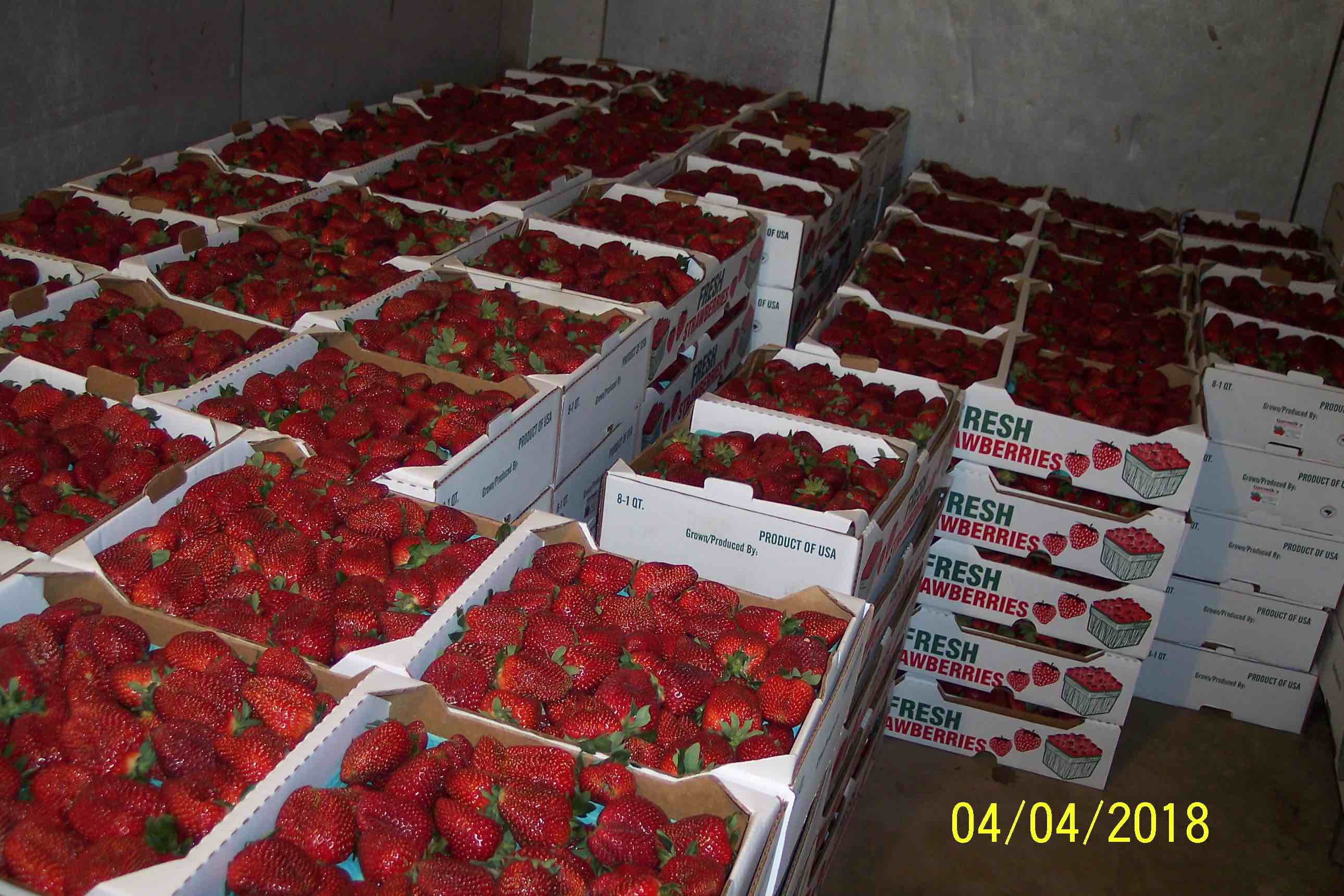 Grower in SC reporting:  BEST QUALITY, LEAST deformed or diseased berries ever in history. The quality, flavor, size and yields have been record setting. Customer demand locally and thru SC & NC has been outstanding, and we have a waiting list. Pictures of a typical packout are attached (Clyde Gurosik, N Augusta, SC)

After the period of very cold  temperatures for the season, temperatures finally turn warmer mid week and go above normal by the end of the week. After that things cool down a bit back to near normal the rest of the month and most likely into May.

There is still plenty of cold air in Canada and it looks like the northern tier states into Canada will remain below normal. But the southern states will tend to be above normal. This will tend to increase the already strong north – south spring temperature gradient to a greater strength than usual for this or anytime of the year. This trend would tend to support an active weather pattern with strong fronts passing through the forecast regions every few days. It also opens up the possibility of allowing the circulation surrounding  one of the storms that develop to tap into the cold air in the north and plunge it rapidly south into the forecast region. Not something that seems likely in the immediate future, but something to keep in mind regarding the longer term forecasts.

The longer range models continue to indicate that May and June will tend to see above normal temperatures. May is now looking to see wetter than normal conditions with precipitation amounts being above average for the forecast region. It is now looking like June will be somewhat drier than normal.

Forecast discussion day 3 – 5   (11 Apr – 13Apr) Temperatures warm from below to above normal; mostly dry conditions all regions.   Large high pressure moves through the region bringing dry conditions with a strong southwesterly flow developing by late in the period. As the high pressure moves through the forecast region, temperatures will warm from below normal conditions to significantly above normal by the end of the period. Expect mostly dry conditions the entire period all regions. Precipitation amounts will likely be in 0.00 – 0.05” range.

Forecast discussion day 6 – 8:  (14 Apr – 16 Apr) Temperatures start of above normal and end below normal; widespread showers and thunderstorms mid to late period. Expect a strong cold front to move north through the forecast region during the period. Expect temperatures to start off above normal ahead of the front, but cool to below normal by the end of the period after the passage of the front   Expect widespread showers and thunderstorms some of which could be severe from mid to late in the period. Precipitation amounts will likely be in the 0.40 – 0.70” range for most locations.

Forecast discussion day 9 – 11:  (17 Apr – 19 Apr) Temperatures warm to near or slightly above normal; widespread showers late in the period.  Expect warmer air to move into the forecast area as a low pressure system moves just north of the region. Conditions stay mostly dry until late in the period when a period of widespread showers and possible isolated thunderstorm activity is expected to develop. Precipitation amounts will likely be 0.30 – 0.50” range.

Forecast discussion day 12 – 14:   (20 Apr – 22 Apr) Temperatures stay near to slightly above normal all regions; widespread showers western region very late in period. Expect a low pressure and frontal system to slowly develop to the west of the region and move toward the forecast region. As it does it will keep temperature near normal with the threat of widespread shower activity developing in the western sections of the forecast region by very late in the period. Precipitation amounts will likely be in the 0.00 – 0.15” range for most locations. 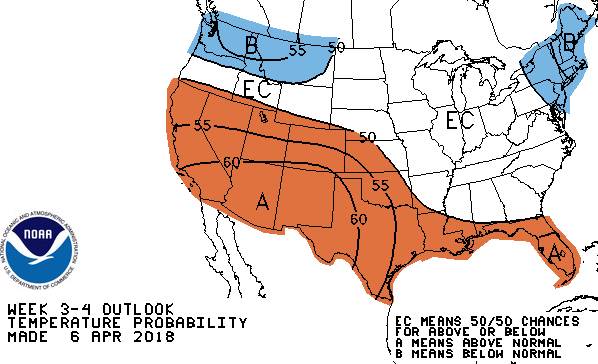 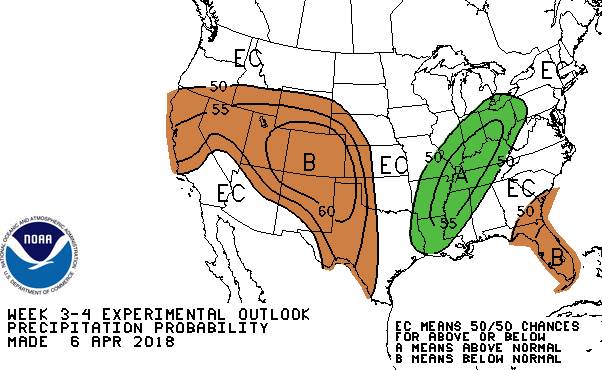 Outlook discussion day 15 – 22:   (23 Apr – 29 Apr) Early indications are that temperatures and precipitation will be near the seasonal average during this period.

Outlook discussion day 23 – 30:  (30 Apr – 6 May) Early indications are that temperatures and precipitation will be near the seasonal average during this period.