Find this article at:
go.ncsu.edu/readext?530403
— Written By Barclay Poling

I know that rains have been a huge problem for growers all across the Carolinas and Virginia this harvest season. I had a note on May 26th day from Eric Hunter in Easley, SC, stating:

Hey Dr. Poling,
Not sure how wet you guys have been up there, but we have been deluged here.
We have had 7 days of rain in the past 9 days…and the next 7 are forecasted to be the same – with some very heavy rain coming in on Sunday and Monday. I’ve never seen a period like this during the season before. A friend who lives in the town next door told me today that they have had 9 inches since last Tuesday. I’m not sure of how much we have had – probably similar though.
Fortunately, we have had a pretty decent season already and the rain didn’t arrive a week earlier. Things could be a lot worse. I can’t complain at all. As I always say, each year presents a unique challenge.

I have even had communications this week with growers as far north as New Jersey, and they have also been experiencing unbelievable rain issues up there as well, and I’m afraid their VIP Memorial Day Weekend was pretty seriously impacted.

This particular Outlook is somewhat unusual in that we are really focusing in on strawberry growers near my home in Williamsburg, VA (I moved up here from Raleigh 2 years ago this week). Perhaps next year it will be possible to do more in-depth Outlooks for specific growing areas in our 3-state region like the VA Beach/Richmond area? If you are a producer in this particular area, please let me know what you think of this more localized forecast?

WEATHER OUTLOOK FOR VA BEACH AND RICHMOND AREA FOR JUNE 1-26:

In general, the June weather pattern favors somewhat higher precipitation amounts near Richmond than Virginia Beach. The next several days will continue to see periods of widespread showers and thunderstorms with above normal temperatures and high humidity in both locations. We don’t think the precipitation will be extraordinarily heavy, but growers need to keep in mind that with this type of pattern that favors showery weather, there is always the chance that a few locations could see much higher amounts of precipitation than the typical precipitation amounts across the area as a whole.

Things finally start to dry out and cool down by Monday, June 4, as slightly cooler and drier air moves into the forecast area region. Expect mostly dry conditions and near normal temperature to prevail most of next week before the next weather system brings significant precipitation by about Friday, June 8, with showery conditions prevailing until about June 12. The remainder of June looks to be near normal for both temperature and precipitation.

Our main concern for the possibility of significantly higher than normal precipitation amounts occurring during the latter half of June would be an early tropical system impacting the region. El Nino conditions have not developed yet, and sea surface temperatures are significantly above normal in the Gulf of Mexico, so even though another early season tropical system similar to Alberto is not likely,  it is a possibility.

Forecast discussion day 3 – 5 (01 Jun – 03 Jun) Temperatures above the seasonal average to start the period then drop below normal by the end of the period; scattered showers mid to late period.  After a very warm and wet start to the period, cooler air moves into the forecast area region behind a low-pressure system. Scattered showers and thunderstorms are expected from mid to late in period with most locations in regions 1 and 2 receiving some precipitation. Precipitation amounts will likely be in the 0.10 – 0.35” range, but isolated higher amounts are possible where thunderstorms occur.

Forecast discussion day 6 – 8: (04 Jun – 06 Jun) Temperatures start below normal then warm to slightly above seasonal average; only widely scattered showers all period. Slightly cooler and drier air moves into the forecast area region as a high pressure moves into the forecast region from the northwest. Only widely scattered light showers expected through this period with many locations remaining dry. Precipitation amounts will likely be 0.00 – 0.15” with many locations remaining dry.

Forecast discussion day 12 – 14:  (10 Jun –12 Jun) Temperatures start slightly below normal then warm to near to slightly above normal all regions; chance of widespread showers mid to late in period. Expect a slow moving cold front to move through the region causing widespread showers and thunderstorms from mid to late in the period. Expect precipitation amounts to be in the 0.40– 1.00” range with higher amount in some locations. 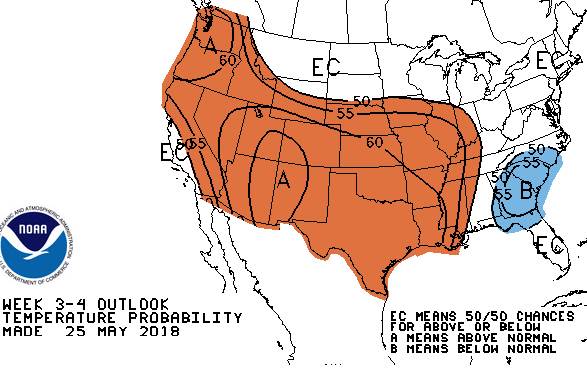 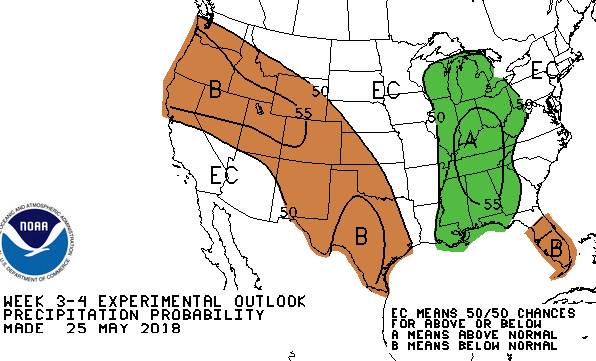 Outlook discussion day 15 – 22:   (13 Jun – 19 Jun) Early indications are that temperatures and precipitation will be near the seasonal average.

Outlook discussion day 23 – 30:  (20 Jun – 26 Jun) Early indications are that temperatures and precipitation will be near the seasonal average