Find this article at:
go.ncsu.edu/readext?522815
— Written By Barclay Poling 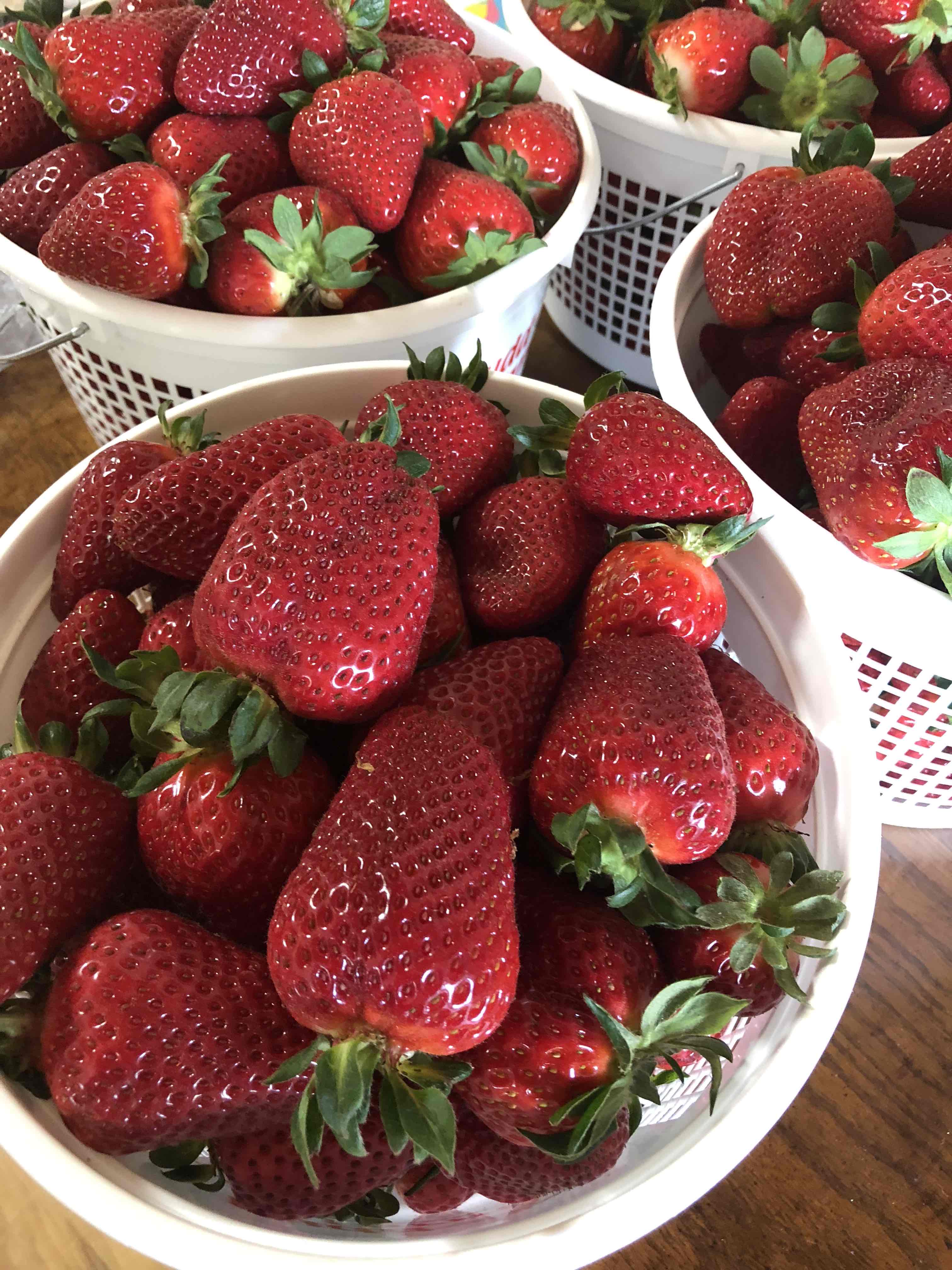 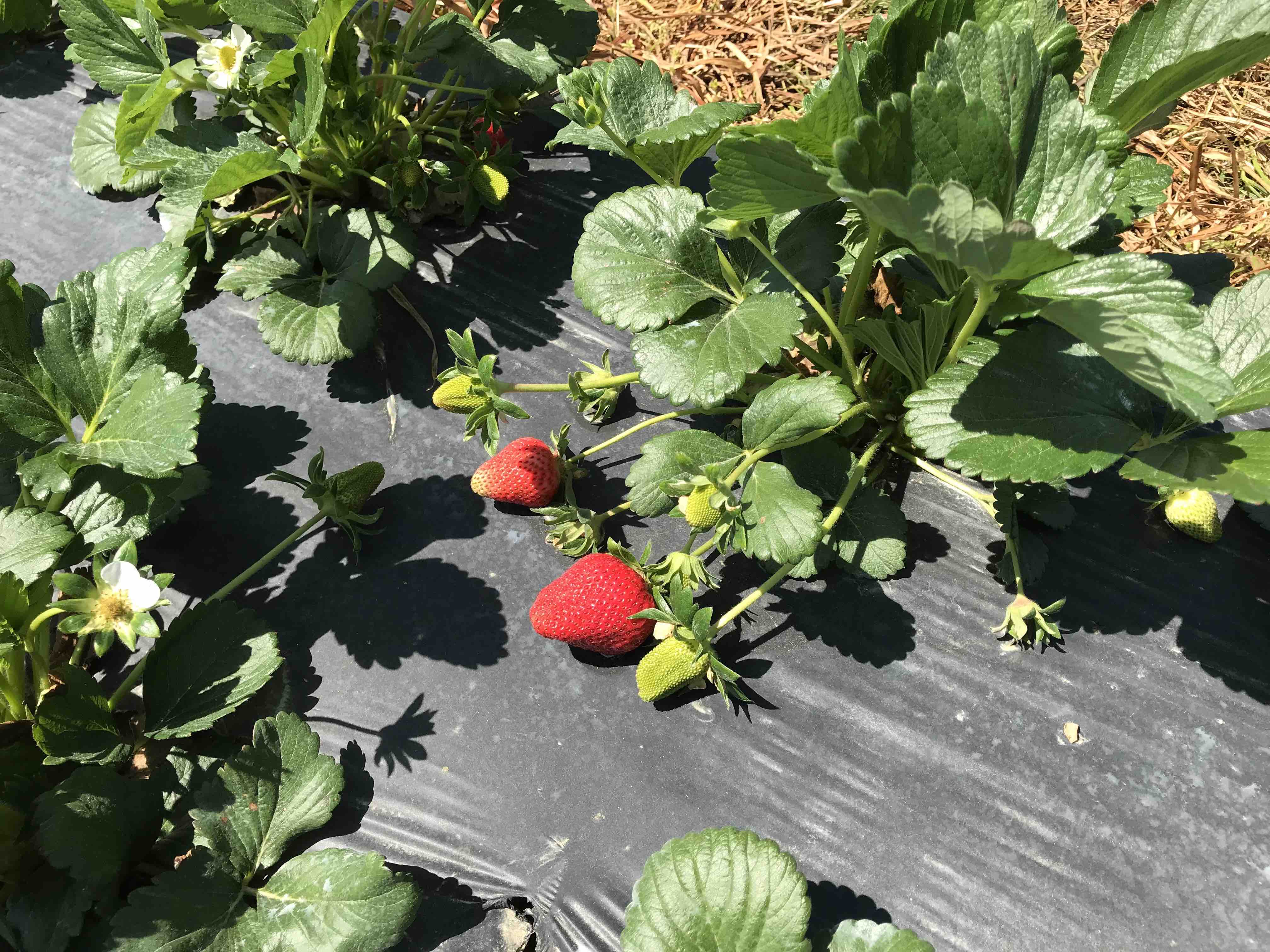 Figure 2. The fruit in Fig. 1 was produced on cut-off plants in this Greensboro, NC field (photo taken 4/12/18). We were thinking the large green berries in this photo would be ready in about 10 days, and they were!

This will be the final VA-NC-SC Weather Outlook of the season, and I wish to sincerely thank those growers who chipped in to make this service possible. These weekly weather outlook advisories have been issued from March 4th until the present (4/22).

This week temperatures start out below normal and wet. Then temperatures warm up to near normal  with dry conditions by mid to late in the week. Still expect swings from slightly cooler to slightly warmer than normal over the next few  weeks, with overall temperatures on average a bit below the average for the season and precipitation above average. Prospects for May are still for temperatures on the whole to be close to average after a below normal start. Precipitation still looks to be near or above the seasonal average during May. The long range statistical models are still indicating June will be above normal in temperature with precipitation amounts being below average for the forecast region.

As mentioned last week there is still plenty of cold air in Canada  keeping much of Canada and the northern half of the eastern US well below normal, keeping somewhat below normal temperatures into the mid eastern US states well  into May. A major factor  keeping temperatures cool up north and influencing the eastern US  continues to be the unusually deep and extensive snow cover across Canada and the very northern portions of some of the northern tier states of the US. But this past week, the snow cover analysis shows that even though snow cover is more extensive than this time in 2017 there has  been significant melting so the influence of the snow cover is in the process of diminishing with time, but it will be a slow process taking a few weeks.

Forecast discussion day 3 – 5   (25 Apr – 27 Apr) Temperatures start cool, below normal then warm to near normal; mostly dry all period.  Cooler air moves into the forecast area as a high pressure moves in to the forecast region from the west as a low pressure system departs to the northeast. Expect a slow warming trend and mostly dry conditions all regions during this period. There is a slight chance of overnight below freezing temperatures in region 1 and northern region 2 if ideal radiational cooling conditions were to set up. Precipitation amounts will likely be 0.00 – 0.05”.

Forecast discussion day 6 – 8:  (28 Apr – 30 Apr) Temperatures cool to below normal than warm to near normal all regions; conditions remain dry. Expect high pressure to slowly move through the region from northwest to southeast. This will cause temperatures to cool once again to start the period by cooling to below normal then warm slowly to near normal for the season. There is again a slight chance of overnight below freezing temperatures in region 1 and northern region 2 if ideal radiational cooling conditions were to set up. Expect little to no precipitation in all regions withprecipitation amounts likely in the 0.00 – 0.05” range.

Forecast discussion day 9 – 11:  (1 May – 3 May) Temperatures start near to slightly below normal then warm to above normal; mostly dry conditions all period with only a slight chance of showers in the western portion of regions 1 and 5 late in the period..  After a cool start, expect warmer air to continue to move into the forecast area as a high pressure system moves east of the region. Slight chance of showers late in the period for western parts of regions 1 and 5 as a weather system slowly approaches from the west. Precipitation amounts will likely be 0.00 – 0.10” range.

Forecast discussion day 12 – 14:   (4 May –6 May) Temperatures start warm above normal then cool to near normal all regions; widespread showers and thunderstorms all period. Expect a cold front to slowly move into then the forecast region during the forecast period with above normal temperatures to start the period falling to near normal by the end of the period. Expect widespread showers and thunderstorms along and ahead of the cold front as it moves through the forecast region. Precipitation amounts will likely be in the 0.60– 1.25” range for most locations. 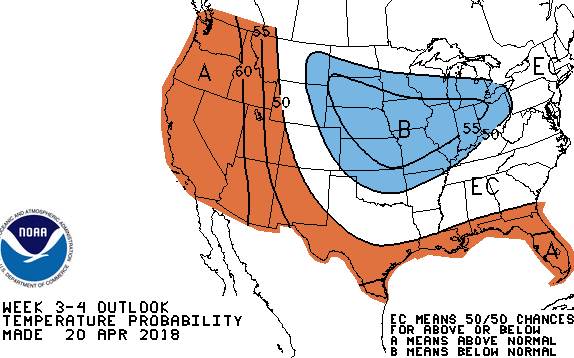 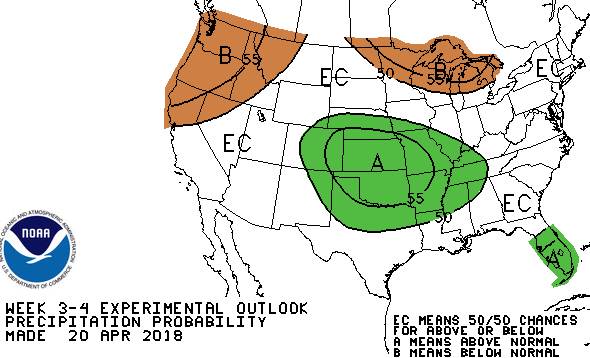 Outlook discussion day 23 – 30:  (8 May – 20 May) Early indications are that temperatures and precipitation will be near the seasonal average. 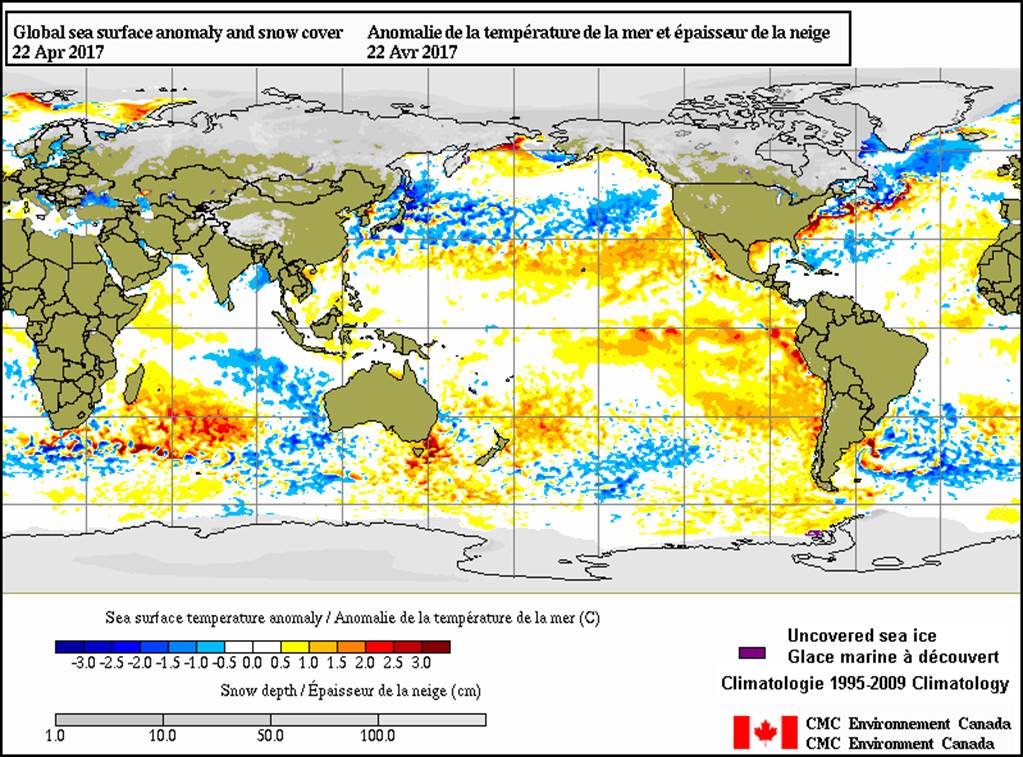 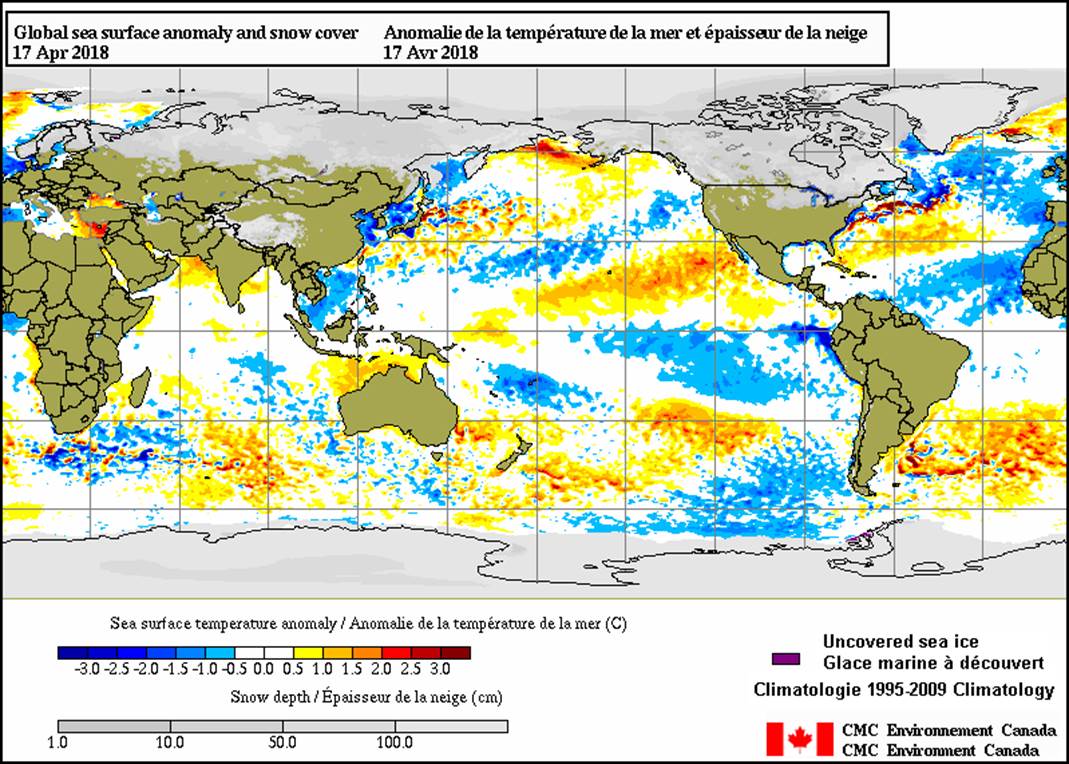 Sea surface temperature anomalies and snow cover chart comparison April 2017 with April 2018. A major factor still impacting the weather in the eastern half of the US this spring continues to be the unusually deep and extensive snow cover across Canada and the northern tier states of the US. The April 2017 chart (left) shows much less snow cover than recent April 2018 charts (right and below). The greater snow cover this year is driving several factors impacting weather in the eastern US. The extensive snow cover allows temperatures to stay much colder in Canada, the source region for cold air in the eastern US. A second factor has been a much stronger than usual north to south thermal gradient as the southern states have generally been above normal in temperature. The strong thermal gradient provides the energy for frequent and extensive storms. It will take a while for the snow in the north to melt. But the right and lower chart for April 2018 are showing significant melting over the last week, so the  influence of the snow cover looks to be in the process of weakening.