Find this article at:
go.ncsu.edu/readext?786095
— Written By Mark Hoffmann

A widespread freeze is expected on the weekend, starting Thursday (April 1) to Friday (April 2) night. Protect your crop with row covers, starting today or latest on Thursday (April 1) afternoon. The temperature won’t be too severe and stay in their 20s in most areas, but not all! Please check your specific location below. The freeze is predicted to last 2-3 days. If row-covers are used for an extended amount of time, risks of grey-mold and mites will increase.

A stronger cold front pushes through mid week (Wednesday/Thursday), with some rain and scattered storms. Rain totals mostly 1/2 inch to locally more than one inch. The air mass behind this cold front originates from Northern Canada, with surface high pressure moving Southeastward through the Northern Plains and Southern Ohio Valley Thursday and Friday and settling over the Carolinas by early Saturday morning.

An advective type freeze event (with some wind) is setting up for many areas later Thursday (April 1) night through Friday (April 2) morning. Dew point temperatures likely to fall into the 20s many areas perhaps even teens in a few locations, particularly in the Piedmont areas just East and Southeast of the Appalachian chain given the anticipated “drying out” impacts from a N/NW wind. However, growers other areas will likely see temperatures a couple degrees colder and winds dropping close to 5mph ranges would cause air temperatures to fall a couple more degrees than forecast.

This likely will be the morning of highest concern for most areas. As high pressure at the surface moves over the Carolina’s by sunrise Saturday morning. This will allow winds to decrease, and ground temperatures to cool more than those at the official 5 foot level, perhaps as much as 4-7 degrees colder pockets. While dew point temperatures may rise some during the night, as winds subside and wet grounds influence the air right above it, they still likely will be several degrees below freezing many areas. This sets the stage for a widespread freeze with locally heavy ground frost possible. This frost and possible ground freeze will extend into Southern growing areas of Georgia as well. Not as cold Easter Sunday morning, but still frost risks. Frost and freeze risk is minimal for several days after this weekend.

Cover your plants with row covers today or latest tomorrow and leave them covered until freeze conditions are over. In areas in which temperatures are predicted to be in their teens, consider double covering! Have sprinklers in the field and set up in case you will have to use them. The freezing temperatures will move into our area on Thursday (April 1) and will last until Sunday (April 3). We will keep you updated as the situation develops. 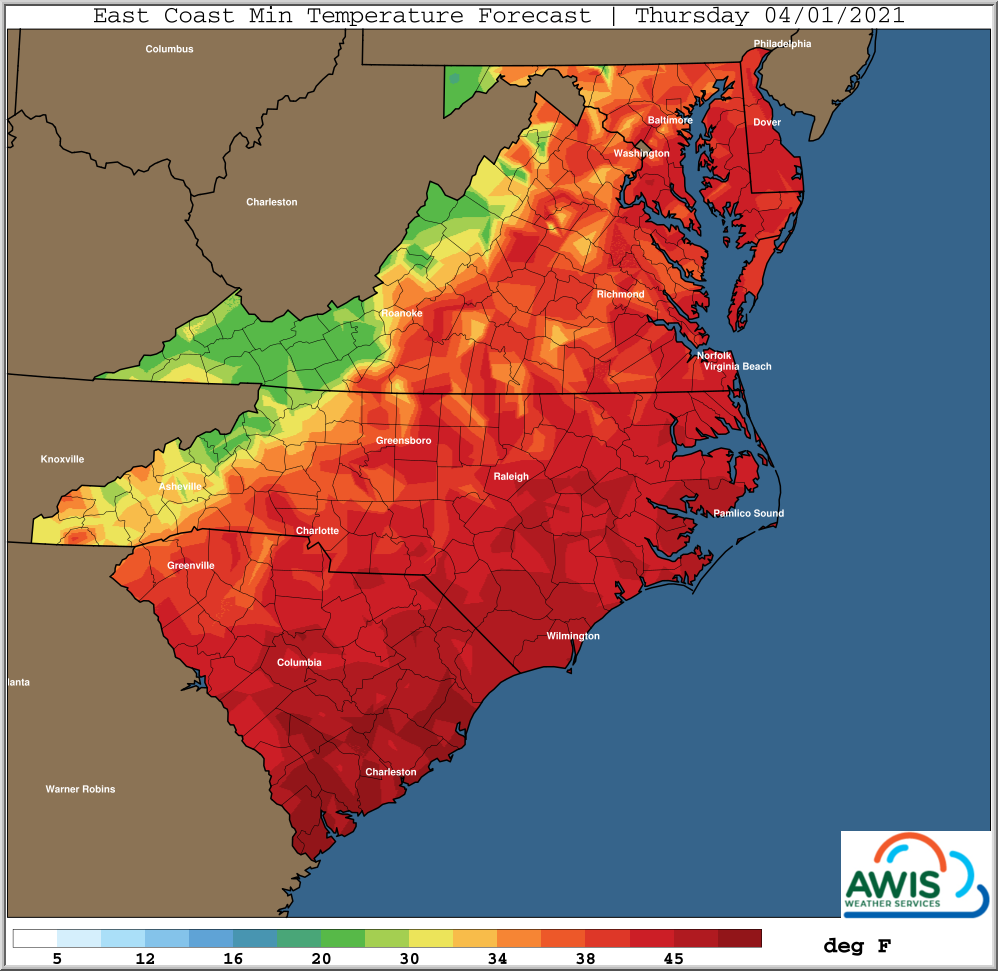 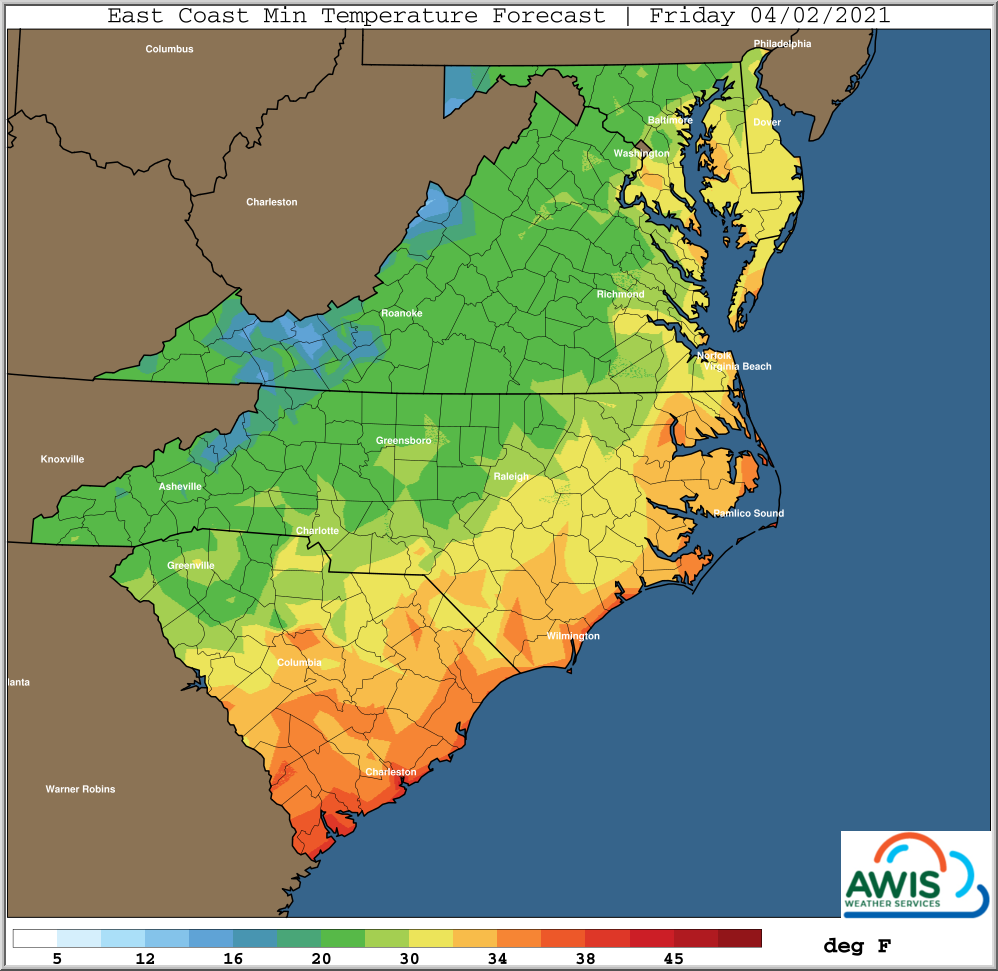 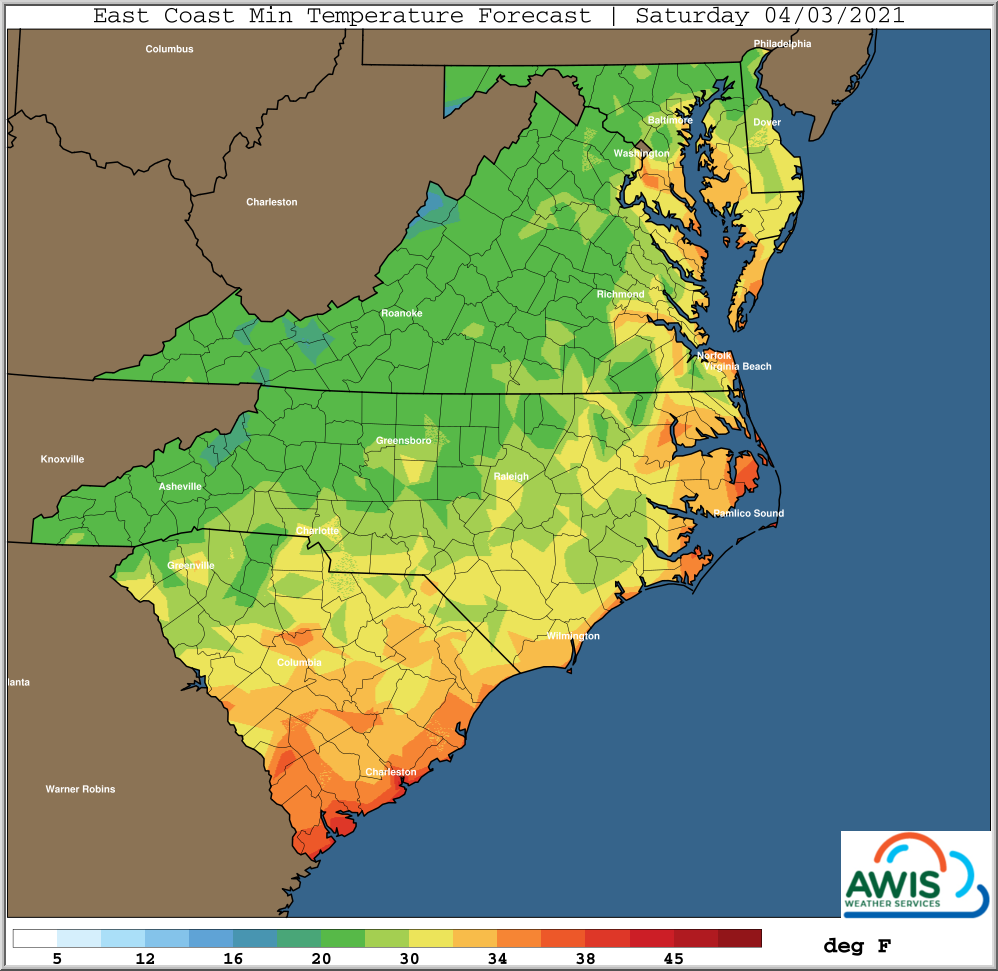 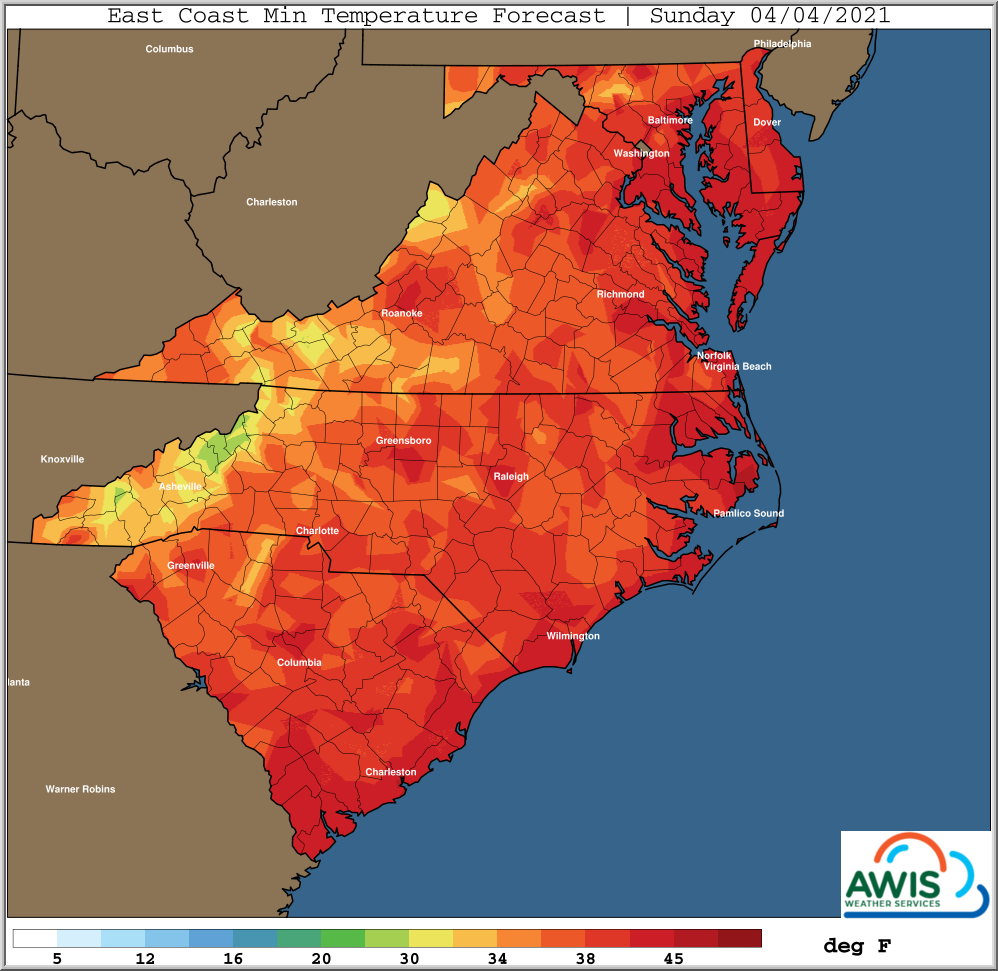 Figure 1: AWIS Weather Services: Minimum Temperatures for the region from Thursday (April 1) to Sunday (April 4). The freeze warning starts Thursday-Friday night and conditions will improve on Saturday. However, there are still chances of frost the night from Saturday to Sunday.

This post was created under the consultation and with permission of AWIS Weather Services.