Find this article at:
go.ncsu.edu/readext?845071
— Written By Mark Hoffmann

in collaboration with AWIS Weather Service

As you are all aware, another cold front, propelled by the polar vortex, is awaiting us this weekend. However, while the temperatures drop into the teens in some areas, I only want to issue this as a weather warning rather than a full blown advisory.

The temperature sensitivity of a strawberry plant depends a lot on it’s physiological state. Dormant plants, that are acclimated to colder weather, usually do fine without protection even in the teens. Plants that are in an advanced crop status however could be damaged at higher temperatures.

In some areas of NC and North of that, in areas that are affected by temperatures in the low teens or even single digits, would be the only situation in which I would recommend to put covers on, because strawberries can get crown damage even in a dormant stage if temperatures drop into the single digits. However, most of you are most likely under row covers already.

Other folks in NC, parts of SC and GA will experience temperatures in the 20s and will most likely not require row-covers this weekend. However, if you have deployed covers, please leave them on until the cold front has vanished. It is supposed to warm up Monday/Tuesday again.

However, it is important to note that the Vortex will also bring rain and snow before the temperatures drop, and wet row covers can also be a risk. In areas where the temperature does not drop into single digits or into the low teens, and a judgement call needs to be made case by case. This needs to be based on your crop status and the predicted minimum temperatures at your specific location.

The recent surges of arctic air masses will continue with the
next front racing through later Friday afternoon, as strong
low pressure develops just off the NC coast and deepens as
it races Northward towards the Eastern Canada Maritimes.

This storm has high potential to rapidly develop into a
Nor-Easter with strong winds to go along with snow on the
West and North sides of it.

Exact location of the heaviest snow is still in question, but
indications are growing that biggest threats will be along or
just off-shore of the Immediate coasts from NE NC through
Eastern VA, MD and DE.

Snow totals will drop off rapidly to the West, but close enough
call still for all growers along the Atlantic Coast from NC
Northward to stay aware of the latest forecasts.

Otherwise, main story will be the winds and cold behind this,
as NW winds increase to 15-30 MPH (stronger near the Coasts)
and gusty Friday evening through Saturday, along with falling
dew point temperatures into the single digits and perhaps even
to zero or a little below, mainly inland Mid-Atlantic, Western
Carolinas in the Foothills and Appalachians.

These minimums may match or even be slightly colder than those
already experienced in a few areas.

Temperatures moderate the middle half of next week.

Will have to watch the potential of very cold arctic air moving
Southward from Eastern Canada late next week. This could push
Southward along the East side of the Appalachians into VA and
parts of the Carolinas, as a “wedge” type effect common in
winter.

Then, with disturbances in the Southern Jet Stream, will have
to watch for the potential of additional wintry weather by
next weekend.

Staying on the cold side, or at least with “seasonable”
temperatures behind that.

Longer range 3-4 week forecasts continue to try and push the
colder air masses further North (Middle-End February), and
return a large part of the SE into a warmer pattern. Confidence
in this remains low given the past performances. But will continue
to look for signs when more significant, longer lasting warming
trends seems to be more likely.

Updates next week for this very active time of year! 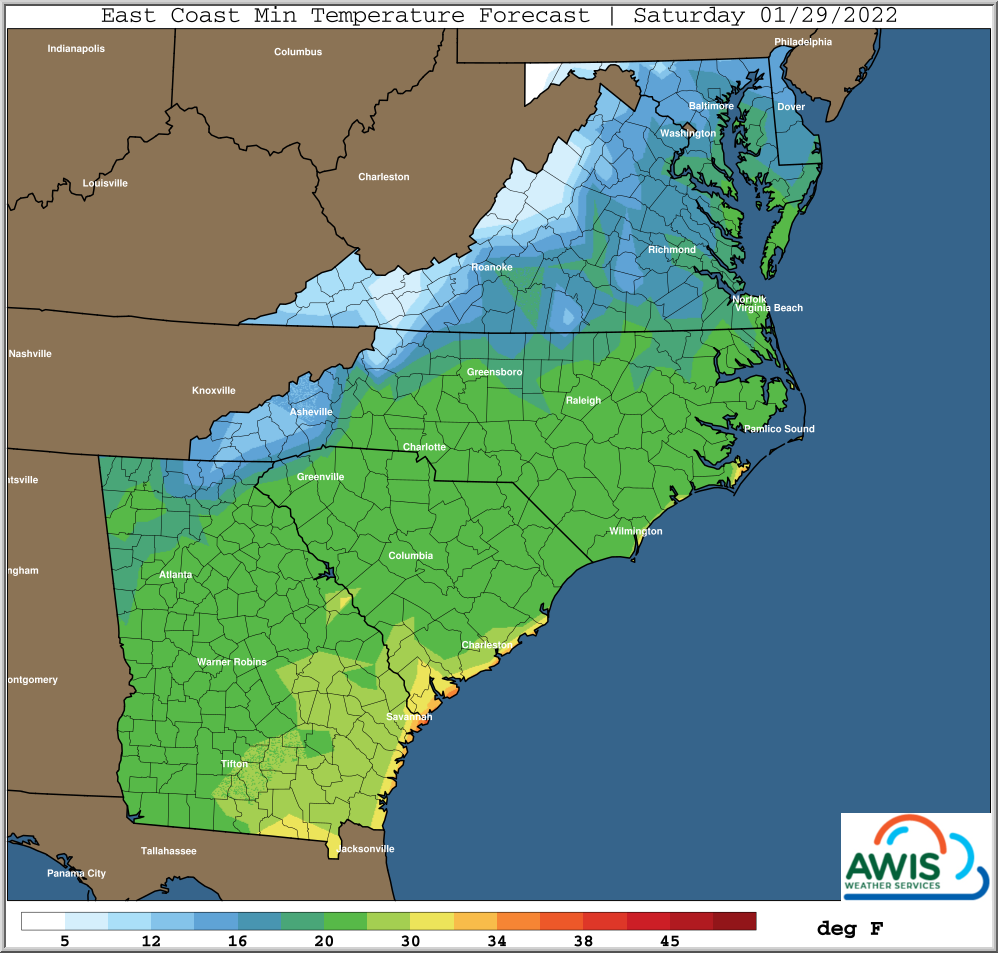 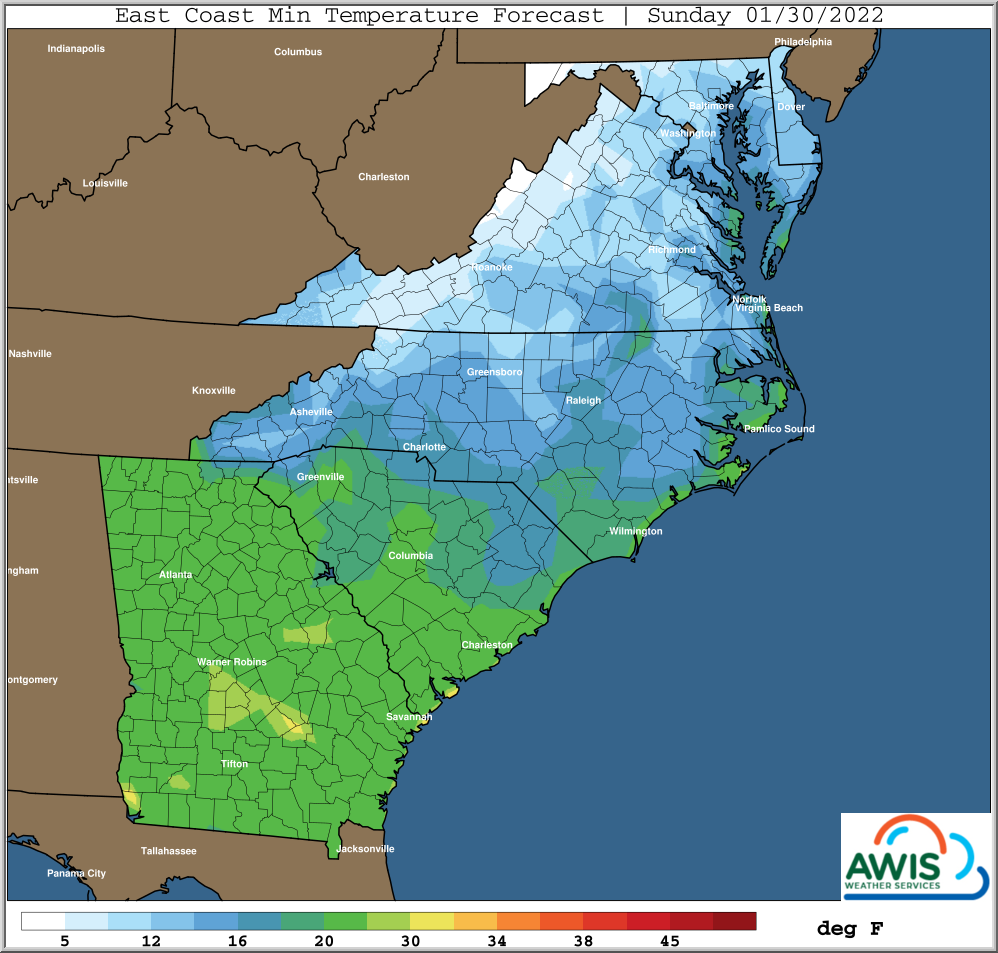 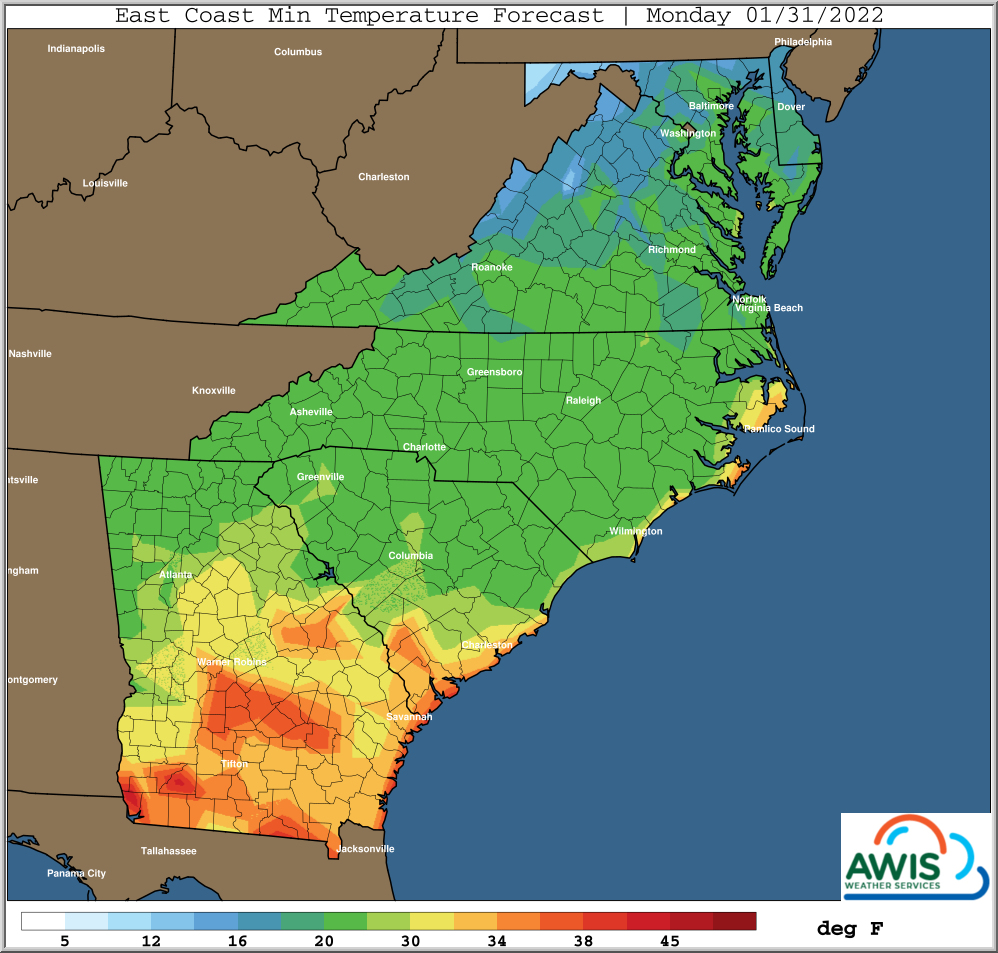 Figure 1: Cold weather can be expected for much of the region after another cold vortex passes through and brings some winter precipitation.