Hectic Meeting Schedule Continues, but Here Are Some Brief Updates on Weather and Virus Findings in VA (Jan 11, 2013) 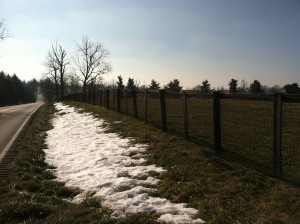 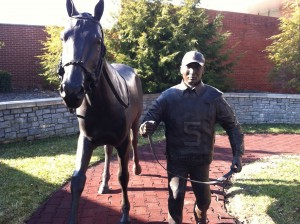 Just back from Lexington, Kentucky. I did not see much horse racing, but saw hundreds of fruit and vegetable growers at the Embassy Suites  for the 2013 Kentucky Fruit and Vegetable Trade Show in Lexington. I had a nice opportunity to visit with the KY winegrape growers (and some peach growers) about all of their Frost and Freeze issues in 2012 (they had a series of very destructive frosts in early April ’12). Today (1/11/13) I am getting ready to head down to Savannah, but before my departure I have been getting some important updates on weather from Dr. Glenn Van Know, Meso Inc. (just below). This forecast was actually done on Jan 6th (Sunday), and Glenn really hit it on the mark for the 8-10 Jan period. And, it did become very mild out in Lexington area on Monday (1/7) and Tuesday (1/8), and I took advantage of the weather out there to see some of the horse country north of Lexington and even saw some snow (from an earlier storm that we missed back in piedmont, NC). Today (1/11) we are rainy in Raleigh and in low 40s this early am. However, it will be warming up a lot this weekend! On Saturday we will see a high of 72 F and Sunday 74 F (Raleigh). Could this be related to global warming? I’m sure most everyone read the news this week that:  2012 Was Hottest Year Ever in US. It was year of what one reporter, Justin Gillis, NYT, called the year of the surreal March heat wave that ultimately contributed to our explosion of strawberries in mid-April. How hot was it? The National Climate Data Center in Asheville, announced the average temperature for 2012 was 55.3 degrees, 3.2 degrees above the 20th century average, and 1 degree above the previous record set in 1998. After reviewing Dr. Van Knowe’s forecast and outlook (below), it would appear this weekend we may even be a tad warmer this weekend than what Glenn saw coming last Sunday when he did this update. I have spoken to a few growers in the Sandhills and they are using this warm up period to pull covers off and treat annual rye-grass in aisles with a labeled post-emergent herbicide like Poast 1.5 EC (sethoxydim), and they are also checking for aphid activity under covers. Aphids can transmit viruses, but in southeastern strawberry fruit production viruses have not been a problem for us in the past. An Extension team in Virginia just received a report last night from Dr. Bob Martin (USDA virologist), indicating that both strawberry  mild yellow edge virus (SMYEV) and strawberry mottle virus (SMoV), has been positively identified in a sample that was sent to Dr. Martin’s lab in mid-December that consisted of plants from 2 sources in Canada. The plants with origins in PEI were negative for both SMYEV and SMoV, but many of the samples from Nova Scotia (Bal = Balamore Farm, Great Village, NS) were positive for one or both SMYEV and SMoV. The designation Bal (Aaron Creek) denotes that Aarons Creek Farm in Buffalo Jct, Va was the plug propagator of tips from Balamore Farm. Earlier in December of 2012, I made a special visit up to Great Village to meet with Joe Cooper (owner Balamore Farm) and John Lewis, who is my extension counterpart with Nova Scotia’s Perrenia (semi-private extension service). John is involved with Nova Scotia’s Certified Strawberry Plants service. I am expecting a follow-up report from John Lewis at some point. The nursery industry in Nova Scotia “flew Dr. Martin in” in late October (at the time of Hurricane Sandy). I was able to consult with Bob on the phone before my Dec 3-5 visit. I am also expecting any day another report from Dr. Martin about the virus status of  plant samples I pulled from 3 farms in NC in mid-Dec. Please note that duplicate samples were tested for virus out of each sample bag, and so for sample 1A (table below), for example, you see that Chandler Bal (Aaron Creek) is positive for both viruses (+), for two leaf samples from the same bag. Thus, we now have scientific evidence that both SMYEV and SMoV are present in these Chandler plants. These viruses are aphid borne. In the Compendium of Strawberry Diseases, 2nd Edition, it is stated that, “Where strawberries are grown as an annual crop (i.e. strawberry plasticulture), these viruses are less important, simply because these viruses are not in the field as long.”  However, it is vip to, “keep plants free of virus infection during the propagation phase.”  This same compendium states, “most strawberry cultivars grown today do not show symptoms when infected with only one of the aphid-borne viruses. These viruses often occur in complexes, however, causing plant decline.” (p.63). Unfortunately, as you can see in the test results below, many of the samples had both SMYEV and SMoV, and it did not seem to matter whether it was Chandler, Camarosa or Sweet Charlie. Note that the DN’s Albion and San Andreas were positive for both viruses. Also, sample 11 D was positive, and this was a Chandler bare root (nursery source needs to be identified).

Well, I am off to Savannah! I am sure there will be more questions about this whole situation at the Georgia Strawberry Grower’s Meeting (afternoon on Saturday). I may actually shorten my talk on “Plasticulture Strawberry Production in Georgia” by about 15 minutes, to address some of the implications of these results (positive confirmation of SMYEV and SMoV in plant material from Nova Scotia), for growers in our region.

Forecast discussion day 3 – 5: (8 – 10 Jan): (8 Jan – 10 Jan):  Above average temperatures. Highs in upper 40s to low 60s. Lows near 30 to low 40s. High pressure moves into the region then offshore causing a southwesterly flow to develop during the period, bringing milder conditions to the entire region. Very little if any precipitation during most of the period.

Forecast discussion day 6 – 8: (11 Jan – 13 Jan): Near average temperatures early, above average temperatures late. Highs in  low 40s  to low 50s and lows in 20s to near 30 early in period. Highs in upper 40s to near 60 late in the period and Lows near 30 to near 40 late in the period. A fast moving, weak low pressure system will move up the coast early in the period bringing a quick shot of colder air behind the low from into the region, but the temperature will stay in the normal range for the season,. But the high pressure that follows the low will quickly move into the area and then offshore causing a southwesterly flow to develop later in the period; once again bringing milder conditions to the entire region. Precipitation amounts in the 0.15 – 0.25? range (water equivalent for any snowfall in the western region and higher elevations.)

Forecast discussion day 9 – 11: (14 Jan – 16 Jan):  Above average temperatures. Highs in upper 40s to low 60s. Lows mid to upper 20s to near 40. The pattern is showing signs of turning colder late in the period as a series of storms track off shore and intensify bringing colder air to the eastern third of the US. Precipitation amounts with low pressure systems will range from 0.25 – 0.50? range (water equivalent for any snowfall in the western region and higher elevations.)

Forecast discussion day 12 – 14: (17 Jan – 19 Jan): Below average temperatures. Highs in 20s to low 40s and Lows near 20 to near 30 early in period. A low pressure system will move up the coast early in the period bringing colder air from the north into the region, bringing the temperatures below seasonal norms. Precipitation amounts in the 0. 25 – 0.50? range (water equivalent for any snowfall in the western region and higher elevations.)

Outlook discussion day 23 – 30: (28 Jan – 4 Feb): Average to slightly above average temperatures. A slightly mild temperature pattern will continue to dominate most of this period, so there is a high probability the temperatures will stay above the 20-year climatological average in the forecast region during this period.