Time to Cover a Late Planting: Colder Temperatures Ahead

Find this article at:
go.ncsu.edu/readext?897426
— Written By Mark Hoffmann (3 months ago)

If you were late with planting, this is the time to cover your plants

In collaboration with AWIS Weather Services

The spill of warm air that had driven temperatures well into the 80s at the Eastern Shore has finally come to an end. We see a sharp turn of this ahead of us.

Which means: It will get cold. Currently temperatures are predicted to be in the 20s. This change is accompanied by rainfalls later this week!

That can be a problem if you – like so many this year – were running late on planting. While the past temperatures were sufficient to supply a late planting with growing degree days to improve crown development.

The use of floating row covers has shown to improve crown development in the first months after planting. Several common cultivars such as Camarosa, Ruby June or Camino Real do require more growing degree days early on to develop healthy crowns. Row covers can be a useful tool during the upcoming weather, if deployed correctly. We recommend to control pests and diseases before applying covers as well. In some areas it might be recommended to wait until after the weekend rain before deploying row covers.

Please use this article for more guidance on row cover use for GDDs in Fall.

Tis the season for changing weather, and boy do we have it going
in the coming 1-2 weeks!

Start off by continued very warm temperatures early this week,
lingering over Eastern and Southern areas most of this week.

Then the remains of current Tropical storm Nicole move through
the heart of Peninsula Florida at mid week, then takes a sharp
NE turn through Northern Florida and along the Carolina Coasts
late this week/weekend.

This will spread rains and isolated heavier showers from Northern
Florida through much of the Carolinas and Mid Atlantic.

Rain totals of 1-3 inches will be common, with locally heavier
totals possible, mainly closer to the Atlantic Coast from SE GA
through the Carolinas and into New Jersey.

Most of this rain will come late this week and the first part of
this weekend.

Winds are not anticipated to be a significant issue, as the remains
of Nicole should weaken as it moves across Central Florida and then
turns back NE across North Florida during the middle and end of
this week.

Behind that it will turn much colder late this weekend and early
next week.

Freezing temperatures and/or frost will return to the Mid-Atlantic
and Northern areas of Interior Southeast.

As the upper air pattern transitions later this week, additional
cold air masses may move Southward from Canada later next week
towards next weekend. 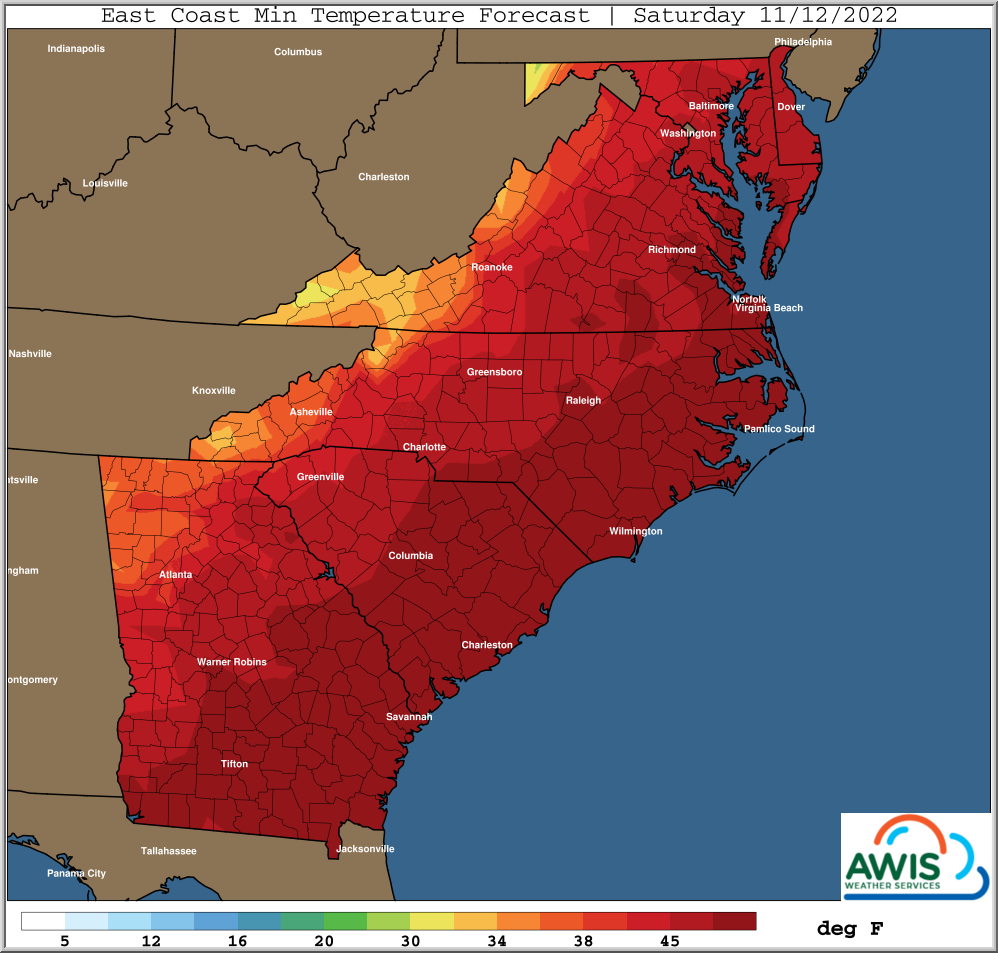 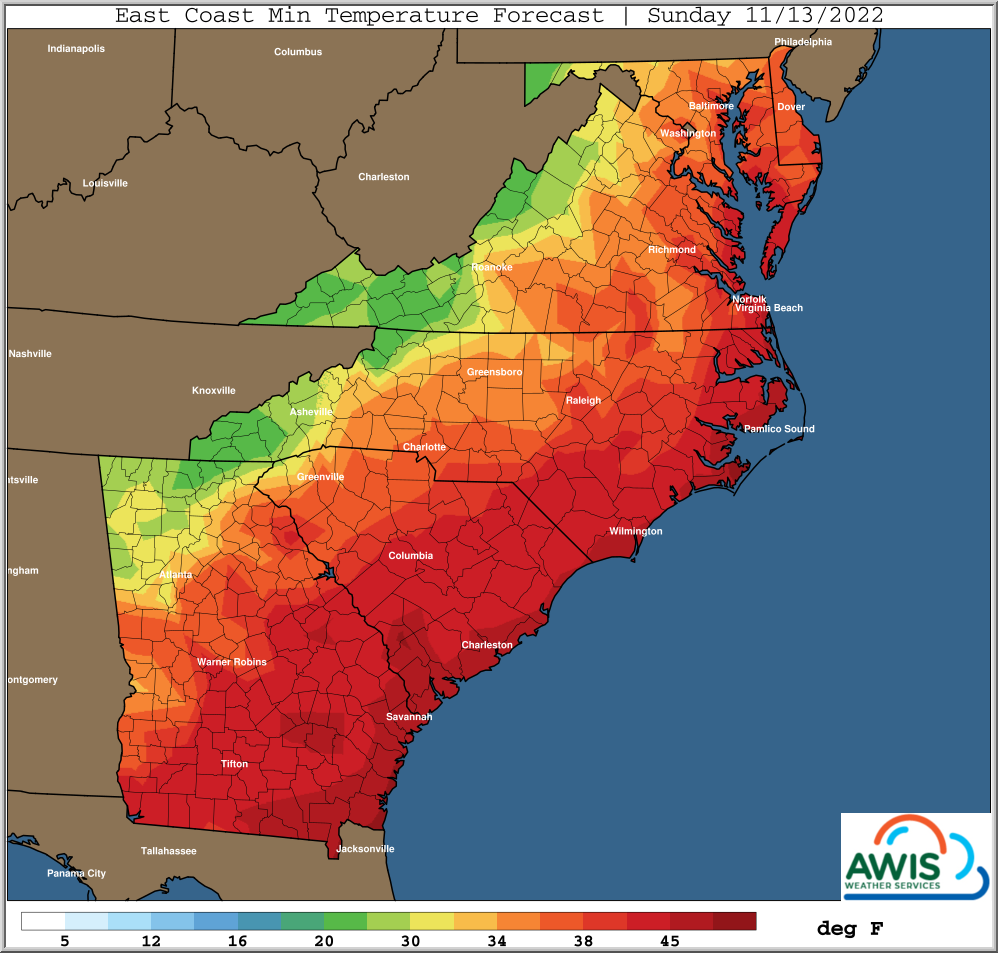 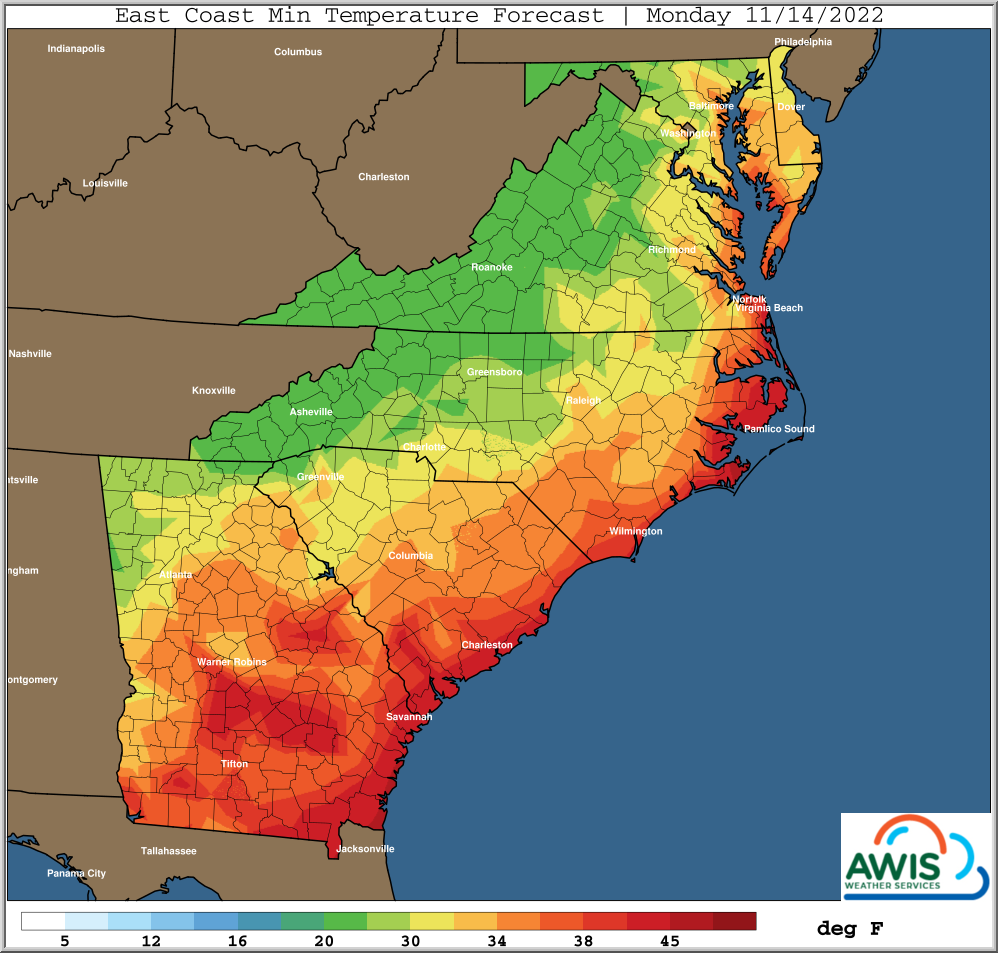 Use of floating row covers to improve crown development

The use of floating row covers to improve crown development can be helpful in mitigating the negative effects of a late planting. This is especially true for cultivars that are in need of higher growing degree days (GDDs) in their early development in order to develop crowns.

Disease and pest control is crucial if row-covers are planned to use. We have developed a short guidance on row cover use to improve GDDs in fall. Please use this document for more information.

If you expect to see heavy rains and temperatures that won’t fall into the teens, it might be recommended to wait until after the rain before deploying row covers. This will help to improve pest and disease management and avoid wet row covers during freezing temperatures on top of a plant.