Find this article at:
go.ncsu.edu/readext?461031
— Written By Barclay Poling 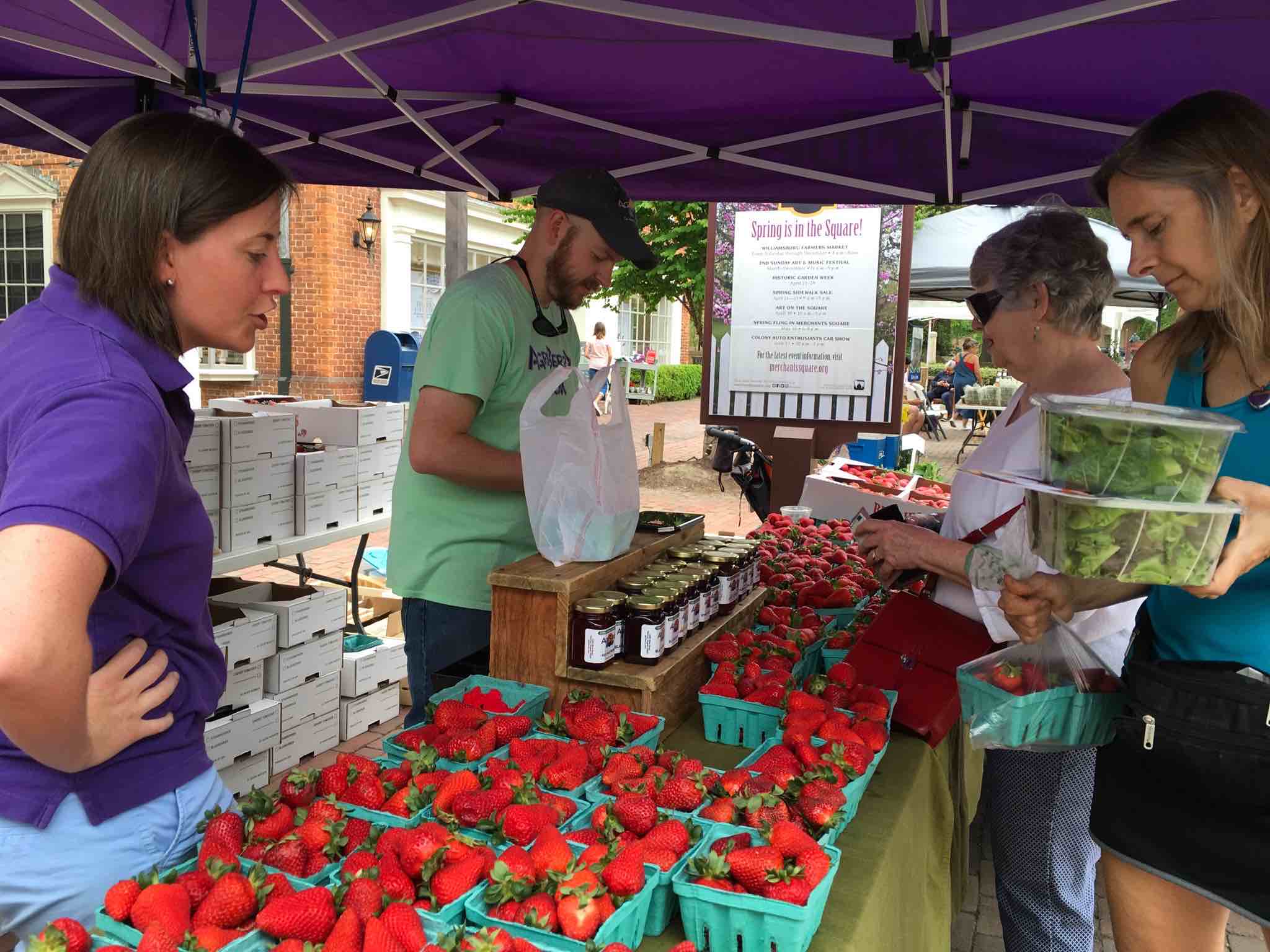 Fig. 1. Growers from all over the region are reporting “brisk” sales this weekend! This photo taken at the Williamsburg, VA Farm Market on Duke of Gloucester (Dog) Street this Saturday morning. Please find below a report sent by Eric Hunter, Easley, SC. Please feel free to send me a report from your area! Williamsburg had the 2nd highest temperature on record yesterday (4/21) of 91 F. The local paper called the Virginia Gazette, has an article today, “Early heat hits the historic area.”

The above average temperatures are definitely advancing the strawberry crop all over the Mid-South.

Hey Dr. Poling,
Just a quick email to catch you up on how our season is progressing.
This year has the potential to be a HUGE season. I am very pleased with everything so far. The Camarosa have been picking very heavy, and are still blooming excellent, with shoots of buds coming out every few days. A lot of things can happen in a season, but right now, this crop has the potential to be the best we have ever had. Berries have been very large and beautiful, with a pretty decent taste for early season.
The Chandler crop has also come on very strong and I am grateful I reduced the acreage of this variety again this year. We only have about 3/4 acre of Chandler, and with all the fruit and blooms on these plants, I would be terrified if I had more. However, from a u-pick vantage point, the customers are loving it.
Weather has been fair. We had a 2 day rain event earlier this week – we picked through it and had very little damage. Another rainy forecast is coming for Saturday night through Monday morning. We are picking as much as we can ahead of it, but may end up with some loss due to timing – we don’t want to over pick the fields and hurt our u pick customers/sales for Saturday. Heat has pushed the ripening even more.

Reports on Ruby June are favorable in Greensboro and China Grove, NC

Before Thursday’s Strawberry Tour in Faison, NC, I had the pleasure of visiting several farms on Wednesday (4/19) in the Piedmont of North Carolina with Jim Bagdasarian, the Lassen Canyon Strawberry Breeder (Fig. 2). Jim had just flown in the day before, and it turned out that April 19th was also his birthday! I think Jim was very pleased to learn on his birthday how favorably impressed the Rudd Family in Greensboro  as well as the Patterson Brothers in China Grove (not shown),  were by his new variety Ruby June. Both the Rudds and Pattersons participated in a variety trial this past season with Lassen Canyon, and in late September they transplanted test rows of Ruby June as well as Lucia, Scarlet and Sweet Ann (day-neutral), as well as Flavorfest at Patterson Farms. Ruby June got some very good marks from both of these farm operations, and it is beginning to look like we may have finally found a replacement for Chandler. Aside from Ruby June’s good size, it has a glossy red color (like Chandler), and it has a really nice ‘strawberry flavor’ – that’s the main reason I asked Jim Bagdasarian to let us test it back in the Carolinas when I first saw it in Oxnard, CA, in February 2015 (Fig. 3). 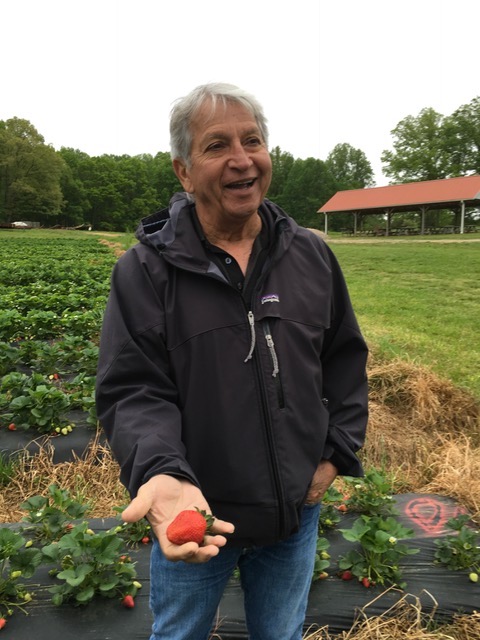 Fig. 2. On Wednesday, April 19th, Jim Bagdasarian, Lassen Canyon Strawberry Breeder, was visiting North Carolina variety trial cooperators, including the Rudd Farm in Greensboro. In this photo you can see Jim holding his new variety ‘Ruby June.’ Ruby June is one of the three new varieties that has been released by Bagdasarian in recent years. Ruby June is the strongest short-day variety of the three releases. It is  more compact and has tighter plant architecture and leaf structure than Lucia and Scarlet. Ruby is also quite early! A grower at our Strawberry Tour in Faison on Thursday remarked that he is actually picking Ruby June in the Sweet Charlie season! Sweet Charlie can have a very loyal following, but this Maryland grower said that of 35 people who came to his farm for Sweet Charlie, it turned out that 20 customers decided to buy Ruby June instead; the other 15 stuck with Sweet Charlie! 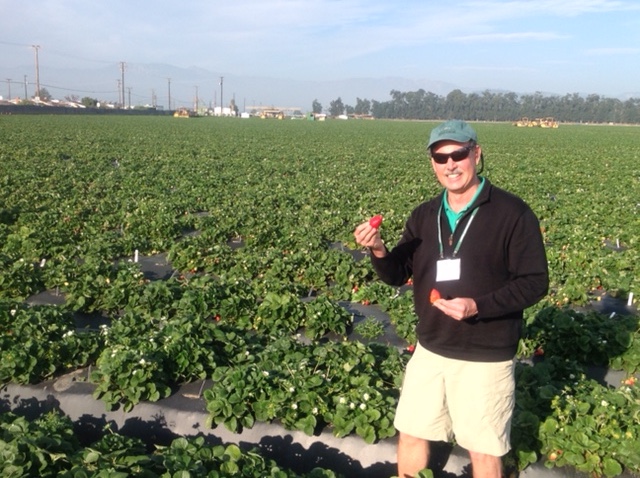 Fig. 3. On February 5, 2015,  I was really impressed by Ruby June’s  ruby red color,  good size, nice aroma and terrific flavor. I also liked the plant habit very much – it has good vigor, but not excessive vigor like we often get with Chandler and Camarosa. Seeing Ruby June for the first time in February 2015 reminded me very much of the time when I saw Chandler for the first time in Irvine, CA,  in 1980! Our industry began growing Chandler in the mid-80’s and it remained our dominant plasticulture variety right up until the late 90s when Camarosa (another University of California variety) came along. 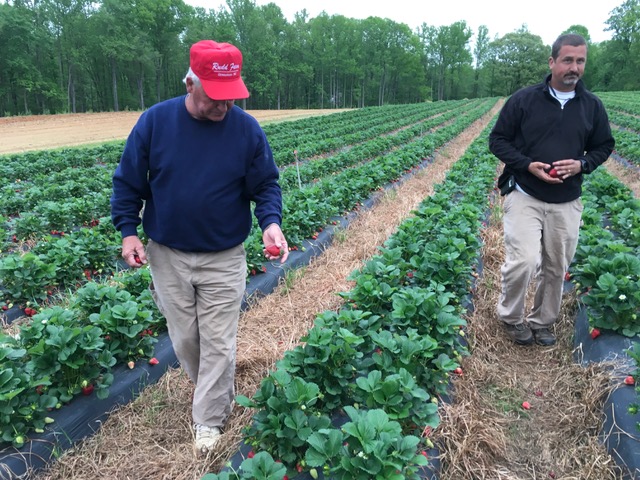 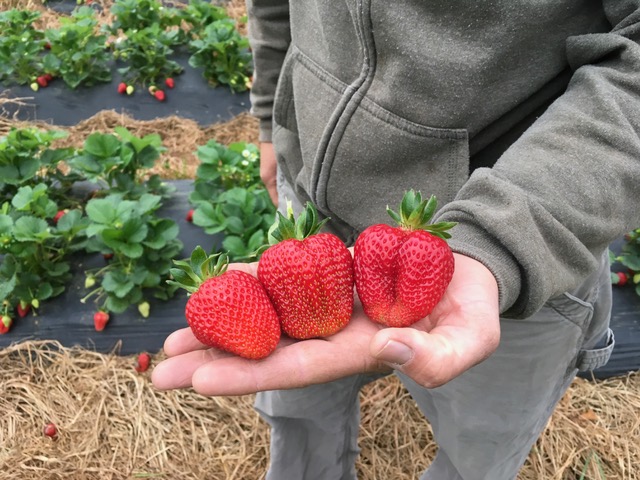 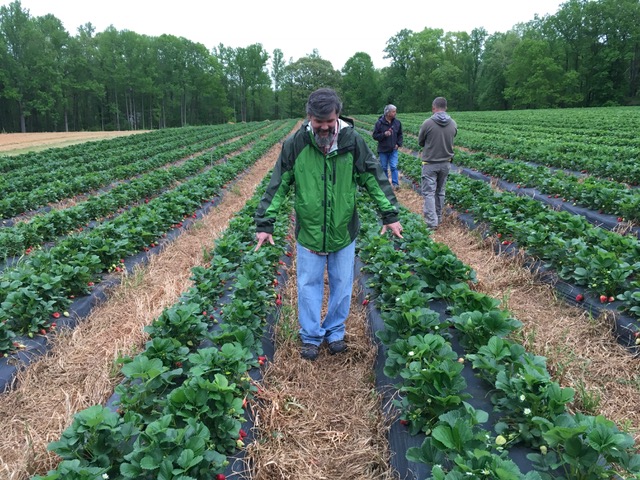 Fig. 5. Side by side photo of Ruby June plugs (left) and Ruby June cut-offs (right). John Ivey is the Extension Agent Agriculture, Guilford County, and he joined us along with Dan Marcum, Cooperative Extension Farm Advisor, Retired, McArthur, CA. Dan is now living in Greensboro and his home is very close to the Rudd Farm (Fig. 9). 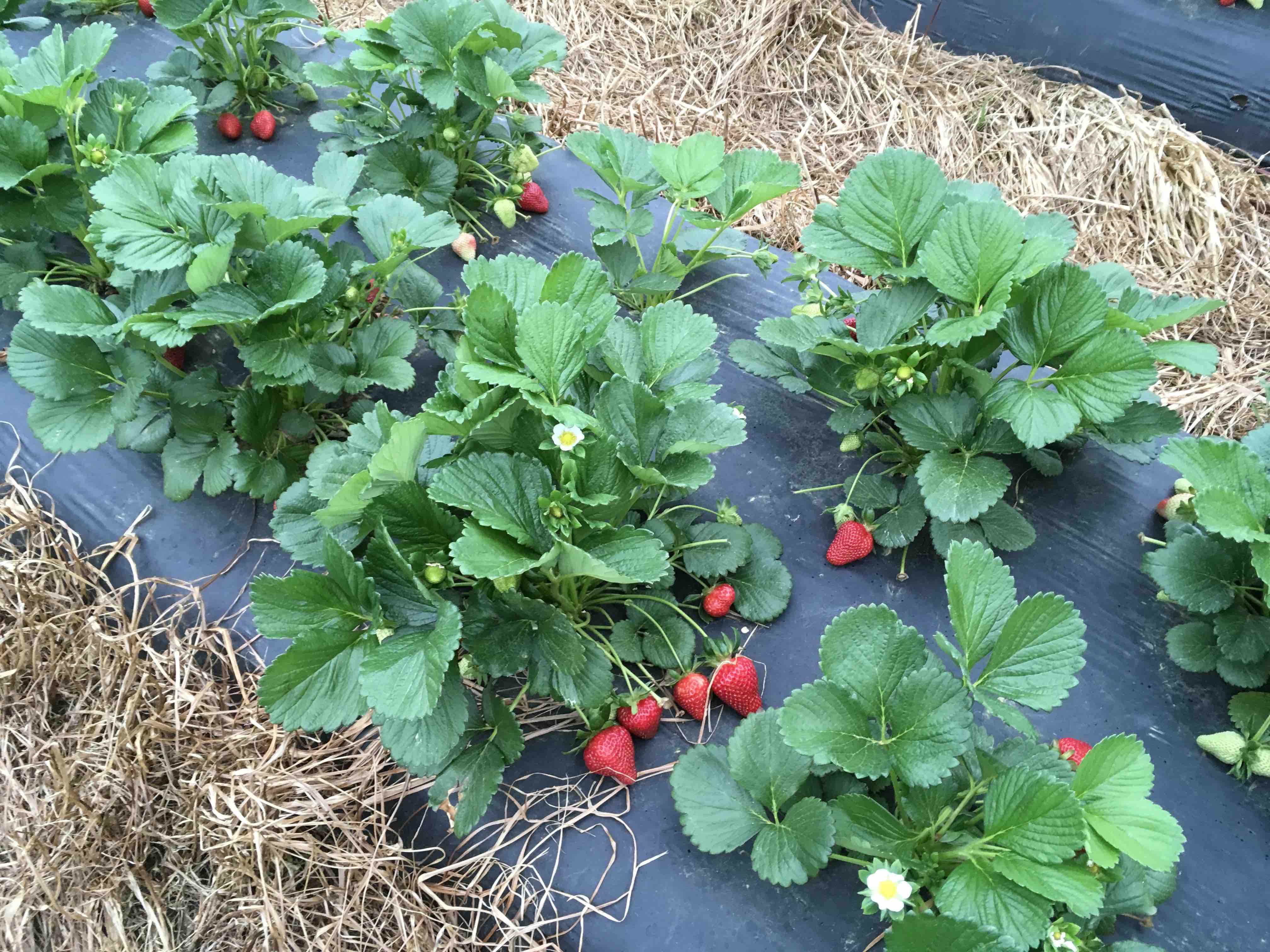 Fig. 6. Ruby June cutoffs that were planted October 15, 2016 and this photo taken last week (4/19/17). Cutoffs are the predominant plant type in California (Fig. 8a and 8b). This type of transplant (8a) comes from northern California nurseries that do not dig plants until the end of September and early October. Probably the most FAQ at Strawberry Tour on Thursday in Faison from the strawberry growers who traveled to this program from the Midwest and northern Virginia and Maryland was, “How early can we get cut-offs in the fall?”  Understandably, they would prefer to stick with a plug plant in these colder winter areas. And, in answer to this question, I don’t think it is realistic to try to get cut-offs any earlier than say October 4-5. Most of the growers in NC and SC that use cutoffs transplant them between October 5 and 15. Of course, one thing that is being done with Chandler cut-offs in Arkansas is to use row covers soon after planting to enhance their fall season development! In Figure 8b is a shot of a Chandler cut-off at Rudd Farm in Greensboro where they planted these plants on October 15th (photo taken April 19). 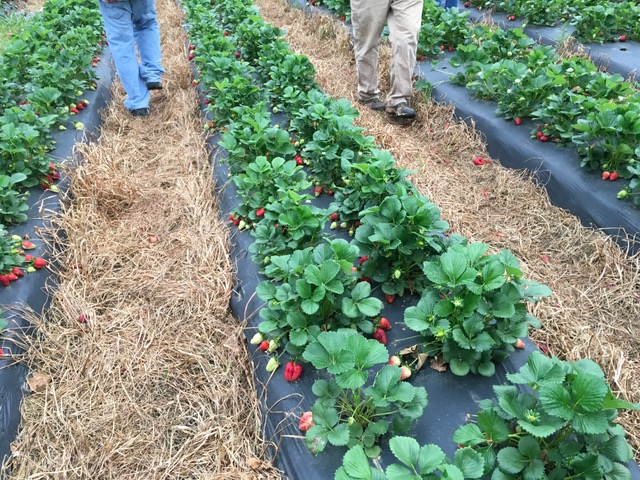 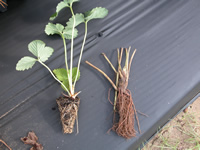 Fig. 8a. Photo showing plug (left) and cut-off (right). For many years “it was thought” that cut-offs will only work in areas like southeastern North Carolina, but take a look at Figure 8b! 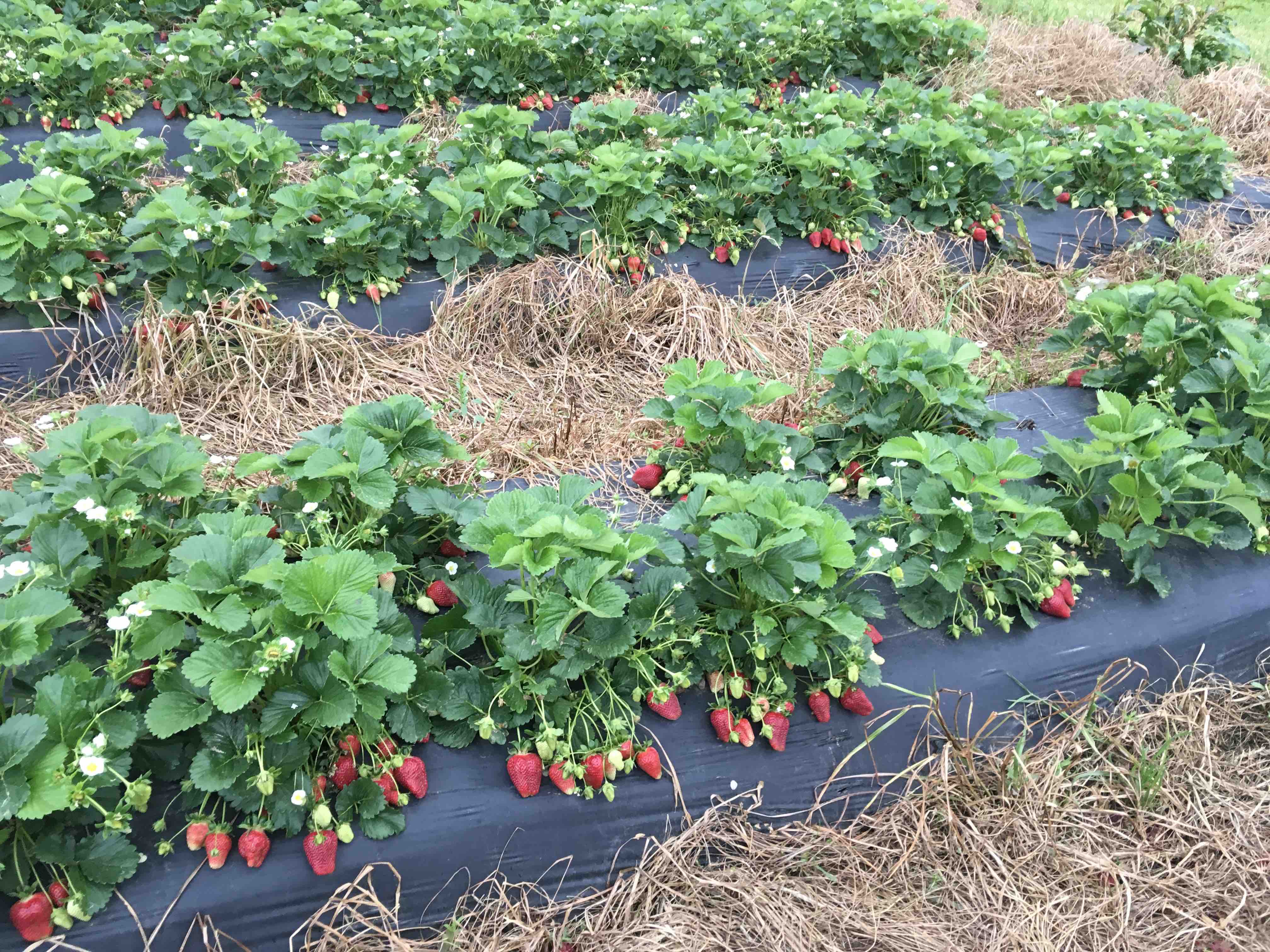 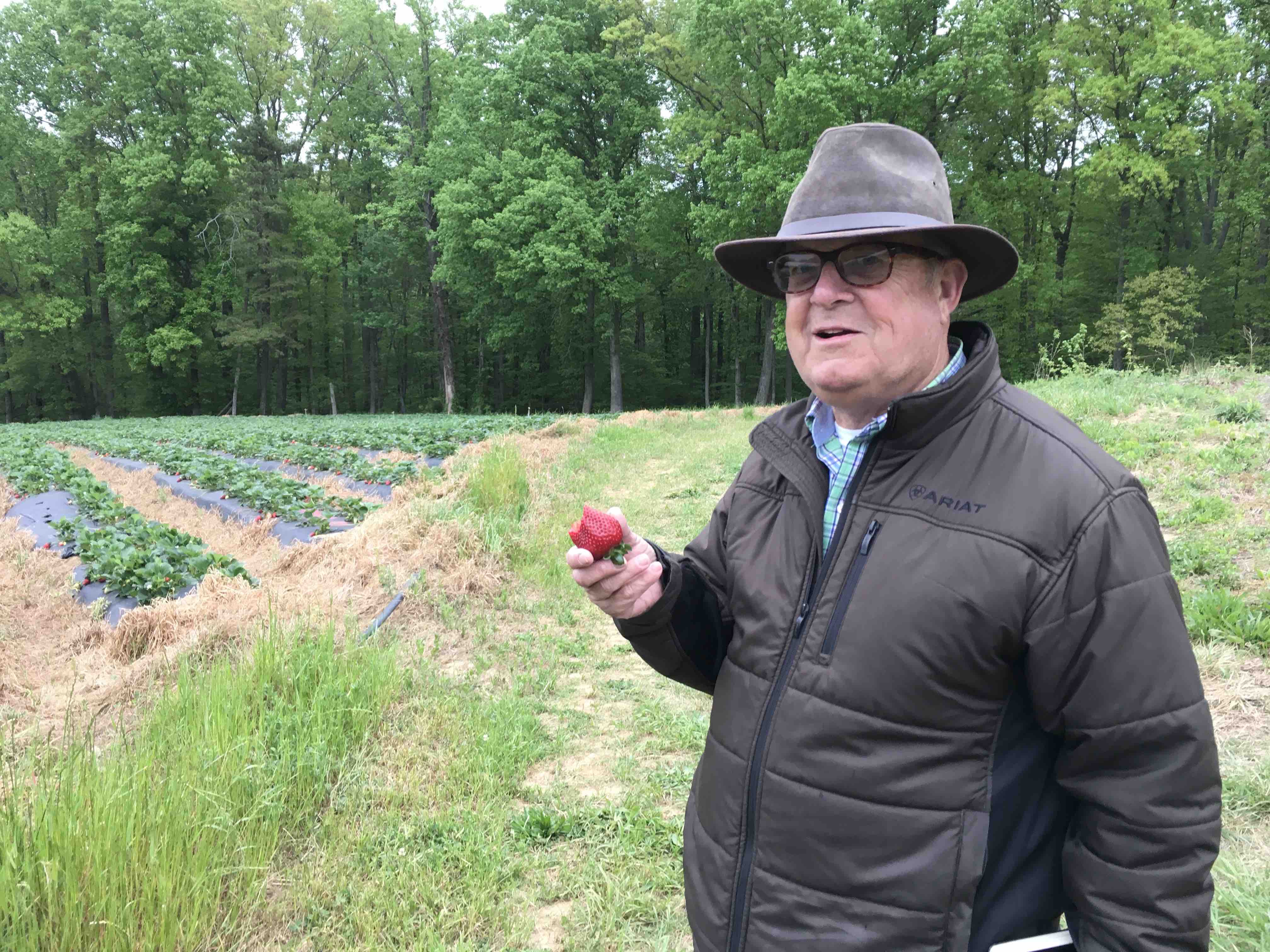 Fig. 9. Dan Marcum, Retired, is a former Cooperative Extension Farm Advisor in McArthur, CA – this is the area where California cut-off plants are produced in the United States. In this photo Dan is taste testing Ruby June. I meant to ask him how he liked it? I did just learn this afternoon from my neighbor Fitzie Wallace in Williamsburg, VA, that she and her friends seemed to really like Ruby June! When I got home from the Twilight Tour in Elm City on Thursday night, I brought her a selection of 1/2 dozen varieties including Ruby June, Chandler, Camarosa, Sweet Ann, Merced, Lucia and Scarlet. Here is what Fitzie had to say today: “Thank you so much, Barclay, for the beautiful berries. I have share with friends and family. Have not gotten all reports back but Ruby Jean seems to be leading the field. Merced did not get as good a report from my friends. Everyone is so amazed as I was that there are so many varieties. Stay tuned, however. Fitzie” 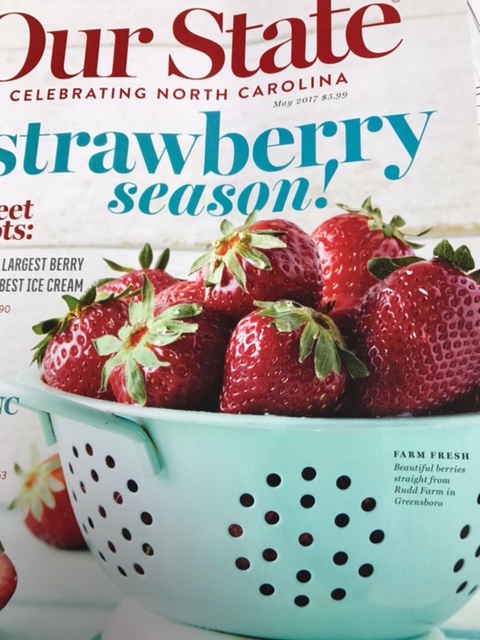 Fig. 10. At the Field Tour on Thursday in Faison, Joan Rudd sent me a text with this photo from the May 2017 cover of Our State magazine, and she informed me the berries used for this photo were from Rudd Farm and the variety is Ruby Jean. Oops!  I meant to write Ruby June. Personally, I have been thinking we should initialize it – RJ.