Find this article at:
go.ncsu.edu/readext?455702
— Written By Barclay Poling

With the covers off I have a better idea of where everything is. The Sweet Charlie’s got whacked the hardest. The top two pictures are of this variety but only a small portion benefited from an overlapping fourth cover (like the ones in these pictures). They look significantly better then the ones only covered with three covers.

The bottom two are Chandler. What’s impressive to me as that some of these blooms must have come through three sub twenty nights with two covers….. a one  and a quarter with a .9 on top. I don’t think this many blooms would have opened since Thursday.

<Editor’s note:  I will hopefully be able to get up with Lowell to get some added info on temp minimums last week at his location near Lynchburg>

Chandler seems to keep the blooms tucked into the plant canopy better and I think that helped this variety. Hoping mid week is the last cold snap of the season. Lowell 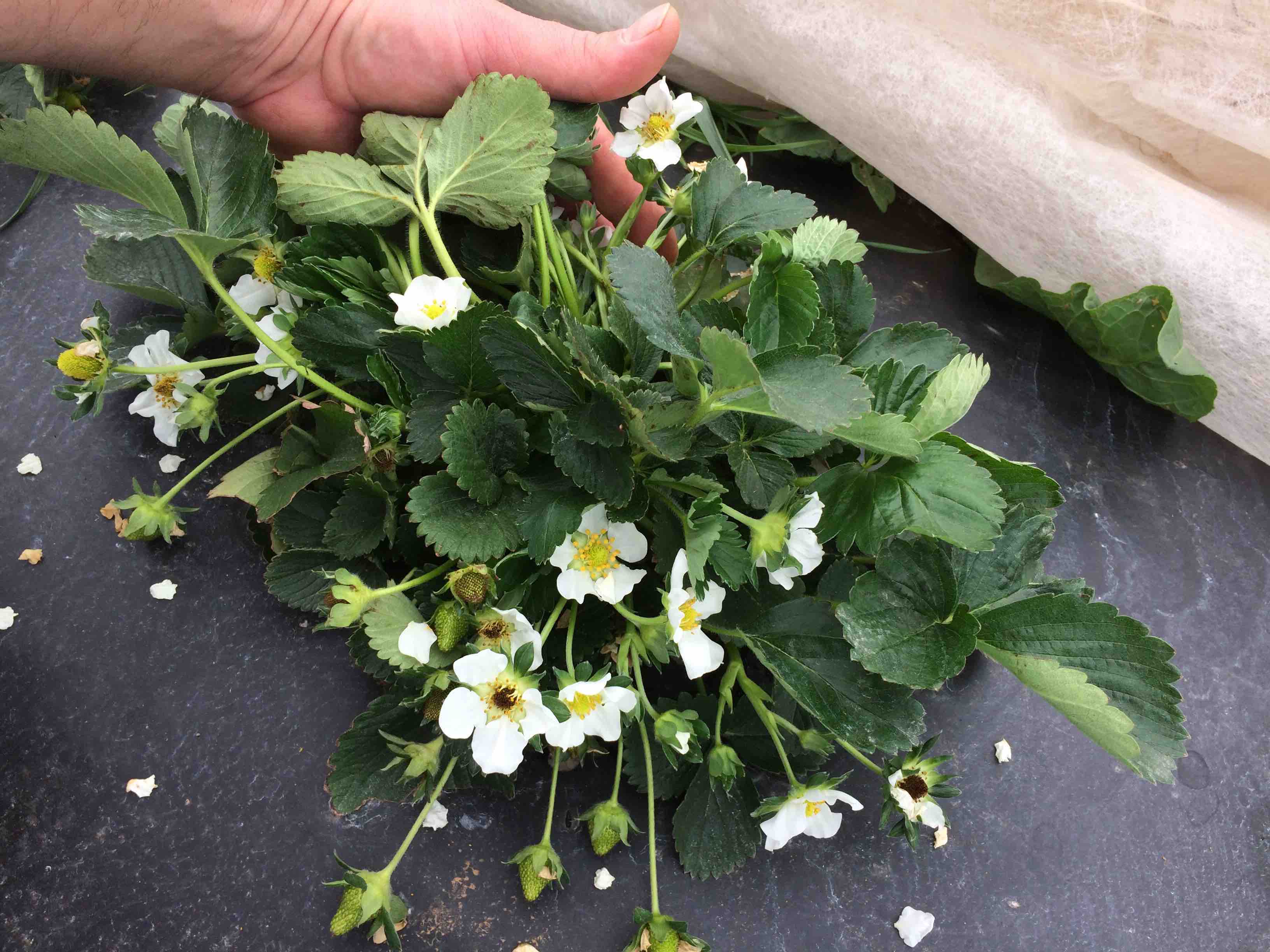 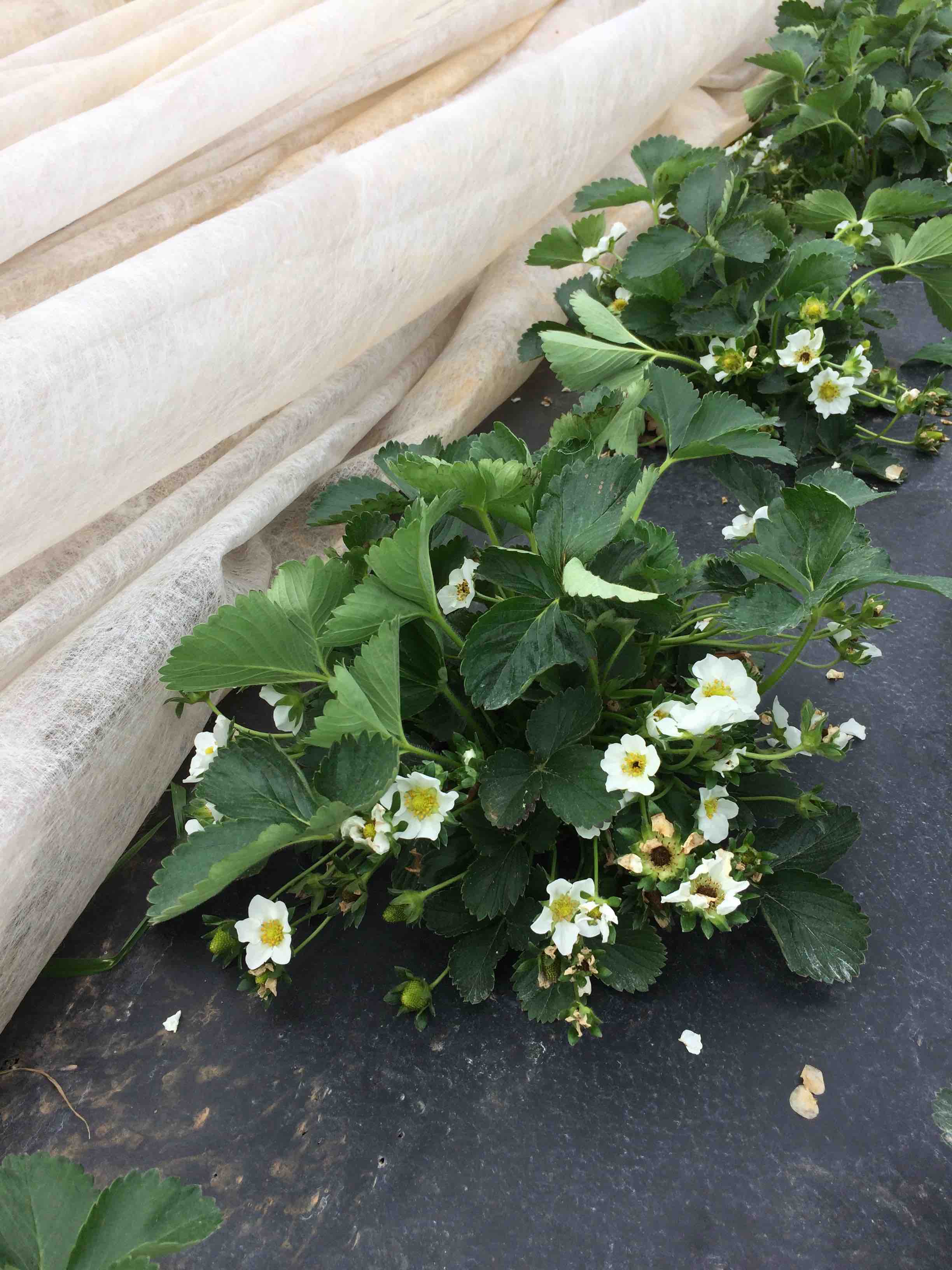 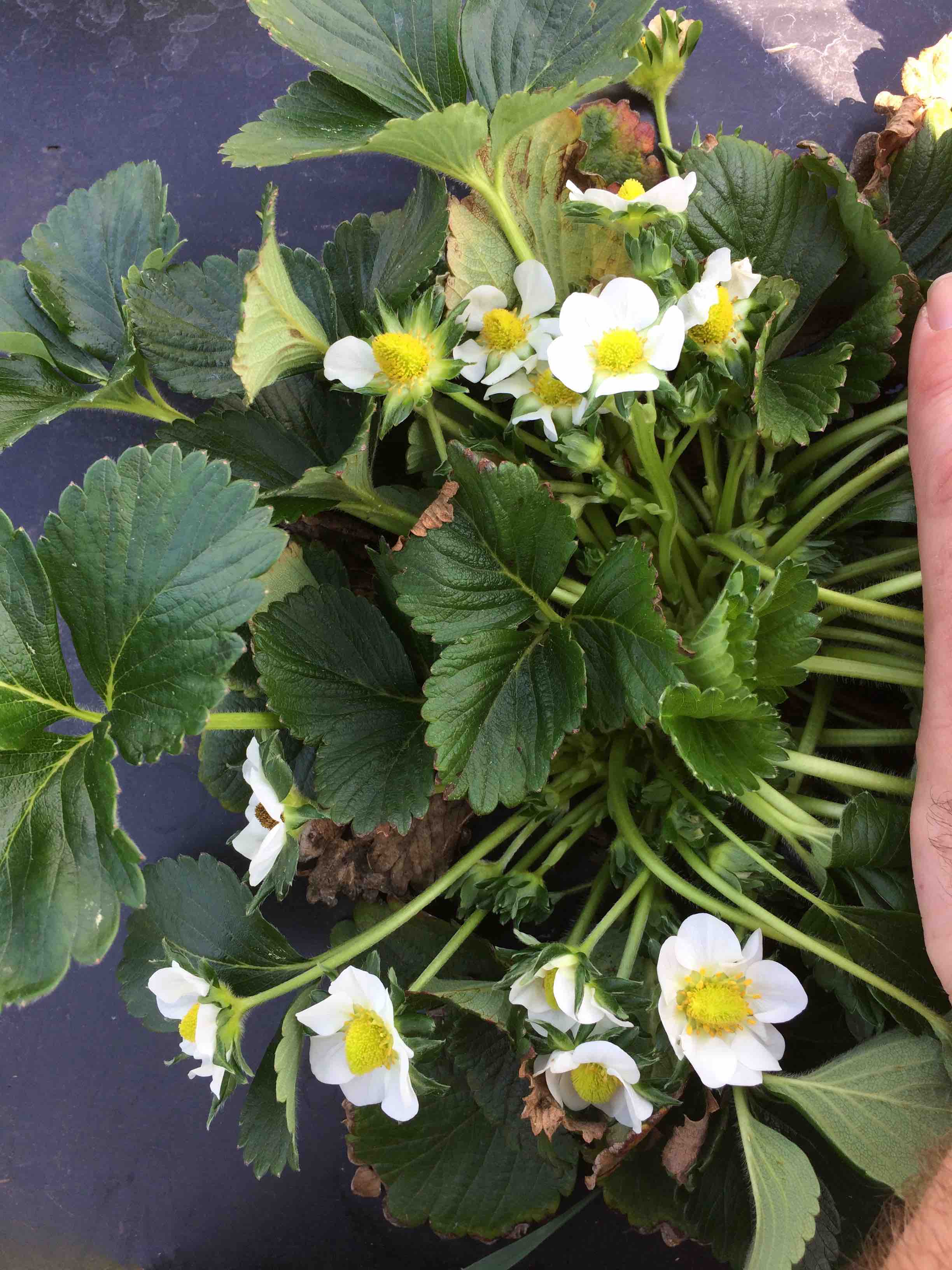 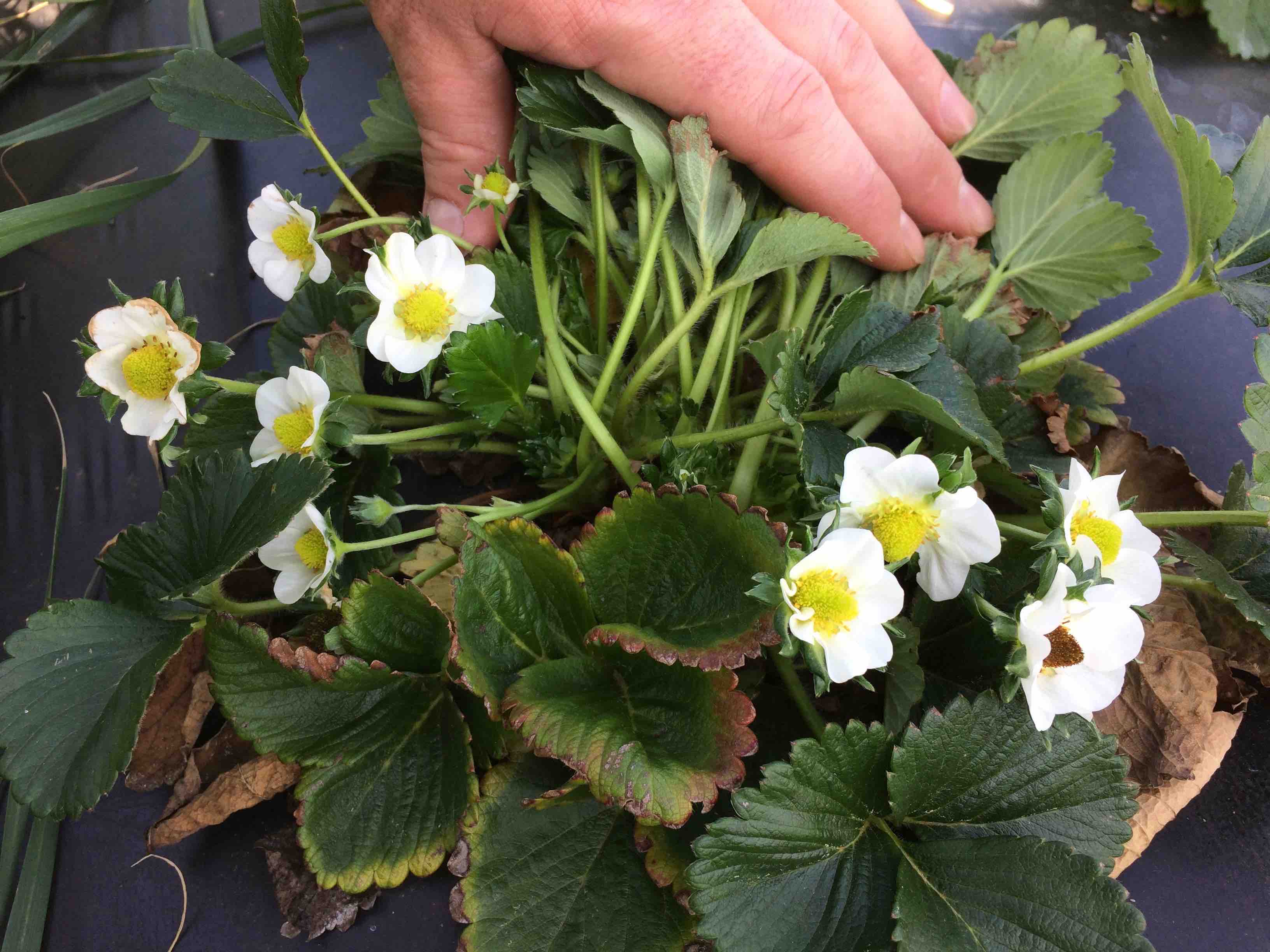 Remember yesterday when I said that historically our second night of an event is always much worse than the first regardless of the forecast, and that was the primary factor that led me to make the decision to put a third cover on? It definitely proved true again. We are currently at 15 degrees and expect it to drop at least one more degree if not two. The good news? Putting on a third cover may have been the best decision I could have made – its 34 degrees (air temperature) under the three. That’s 19 degrees of protection! I didn’t have quite enough covers to put three covers over my entire acreage and have about 25% of the crop under two covers. It will be interesting to see how they fare. I don’t have a thermocouple under those. Given the information we gained yesterday, double covers gave us 13-14 degrees of protection, so it is going to be a very close call.
Our late evening skybit last night had our forecast at 18 (it went up from 17 in its earlier am forecast). This is the first time this year that skybit has been off. AWIS had our nearest reporting station (Pickens) at 17. NOAA had us at 22.
Regarding the third cover, we didn’t put those covers on until 430-600 p.m. I don’t know if that made a difference, but our goal was to allow the sun to heat up the air as much as possible under the already placed two covers. Our three cover coverage consists of (2) 1.2 ounce covers and (1) 1.5 ounce covers. We have three sections where we have (1) 1.2 ounce, (1) 1.5 ounce, and (1) .75 ounce. Our remaining double covered rows are (1) 1.2 ounce and (1) 1.5 ounce.
And in regards to your comment last evening stating that this has been one of the worst weather events (surpassing the Easter freeze) in thirty years:  I couldn’t agree more. Given the stage of our crop and the temps we have faced, it is by far the most challenging and stressful event I have seen in my twenty years of growing berries. I never thought I’d be putting three layers of row covers on a crop. And speaking of row covers, I said this a few years ago and will say it again – I think row covers have become a necessity to our industry. Not just an insurance policy as I once viewed them. To myself, the row cover has become perhaps the most important tool we have.
I will give you an update around noon once I get under the covers and able to inspect the plants.
——————-
NC Grower Shares Notes from Last Week

Here are my notes from last week:

I think maybe the drip was a bad idea or either our start times were off.

I now have the digital thermometer for bloom temperature and I have ordered a device that will tell me dew point, ambient temp and wet bulb.

I haven’t talked to anyone that didn’t have some damage and some that lost everything. My field will be fine but a little delayed (maybe April 10th). I have fertilized and applied Captan and Pristine with a backpack sprayer.

This cold event was definitely one for the record books. I learned a lot and will hopefully never have to experience another week like last week.

This particular grower elected to not run sprinklers last week because of the high risk of having the system freeze up. These are a few shots of the crop this week: 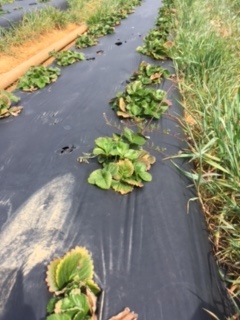 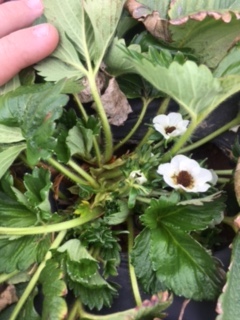 This grower said, “We did nothing. And our agent told us maybe a 10% loss and it could benefit us with bigger berries.
Had neighbors who had been saving their berries until that 19 degree night and they said they had lost everything they had worked to save .

Thanks for your advice,

To be totally honest we are what I would like to think are well equipped to overhead with underground main lines and even a new John Deere pump. First night we irrigated this season pump died. Had back up pump ready in 1 hour but two days later it quit at 3 a.m. Got it back up guickly with no damage then this front hit. When we tried to start last night it was so cold I had to get out the generator and heat gun just to thaw the primer. Every frost proof sprinkler froze within 10 minutes. It was one thing after another. At 6 a.m. and 18 degree temps we gave out. If we had tried to overhead to save them it would have killed us no doubt. My only real concern is what is the possibility of the plants recovering where we see berries in 60 days.
Thanks

Look at the extensive damage to all fruit and blooms!! Watered overhead each night 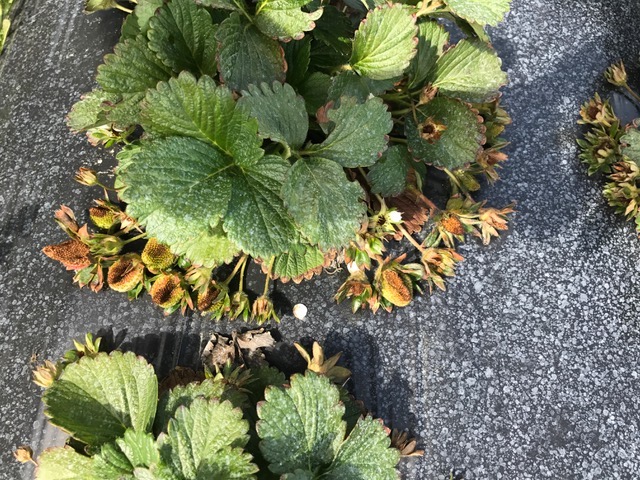 Editor – I circled back yesterday to see if I could catch up with a producer in Durham area (NC) who committed to running water last Tue/Wed (windborne freeze night). I asked if he would do any different knowing what he now knows?

I had to try. Hindsight, I would have sat this one out. I thru water from 9:45 to 1 p.m. . Wanted to start earlier but primer on pump broke. Had to replace and took 45 min. By then, wet bulb and temp was dropping like a rock. Gut said go to bed but have spent so much time already protecting them. I ran that long to protect plants. I checked blooms that afternoon and saw so many dead decided it wasn’t worth 3 more days of watering. Plants looks good. All blooms and popcorn dead. Stuff coming from crown now looks alive. I do have some under covers. 15 rows, 250 ft  long. At least half open blooms died. Popcorn ok. Also, 12 rows 150 ft long. Borrowed a cover from Danny. Half one cover, Have doubled as cover was longer than rows. Double cover part, only few lost. Definitely a row cover event. But, thats farming. It will be interesting to see what they do from here on out.
Note, skybit for my farm has been about 60%. last night called for frost protection from 1 a.m. to 7 a.m. Can temp supposed to be 26. 34 here with light breeze and no frost.
What have you heard from other growers that did nothing?
Thanks, 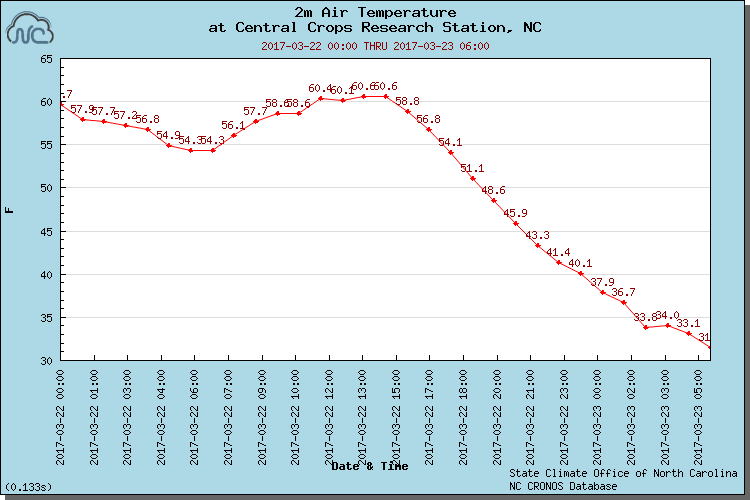 Please note the forecast of 31 F at weather shelter this morning, and 29 min canopy. The actual air temp minimum was 31.5 at 6 a.m.! Here is my SkyBit for Clayton from this morning:

Our crop was totally saved by HIGH VOLUME, BURIED, OVERHEAD IRRIGATION. Yes, we are “VETERAN WATER SLINGERS”, with solid set, NOT above ground systems and we employ large DIESELS for RELIABLE pumping protection. We are experts at walking safely in ICE covered conditions, knocking ice balls off of sprinklers to keep them turning. The temperatures we experienced, 21F, 18F and 19F were simply BEYOND the true protection capabilities of ROW COVERS, even in MULTIPLE layers. We QUADRUPLED 1.5 oz covers on some early squash and they got some cold burn!!

When we know that the temperatures are going to drop BELOW the cover CAPABILITIES, we play it CONSERVATIVELY, as there are really a million things that can go WRONG when there is NO TIME to correct them. This freeze will “GO DOWN IN THE RECORD BOOKS LIKE A WAR”! Whenever we know that ALL is at risk, we play it safe, and get the high capacity, reliable diesels on-line QUICKLY, we don’t pay any attention to our Omega readings. This is our livelihood, not an experiment or a hobby and we are NOT INSURED!!!

The attached dated pictures, tell the story we discussed. My fishing buddy, Dan, ate the giant Camarosa before we could weigh it!! It’s been WIDE OPEN & 18 wheeler loads daily ever since Friday, when our crew arrived. Unfortunately, we are both happy that God blessed us and spared our crop and SAD because so many friends lost over 85% of the peach crop. I still characterize row covers as an INSURANCE policy, and HIGH CAPACITY OVERHEAD IRRIGATION as an “ABSOLUTE NECESSITY” for CONSISTENT, economically feasible  strawberry production at our location. Good luck.
Sincerely,
Clyde 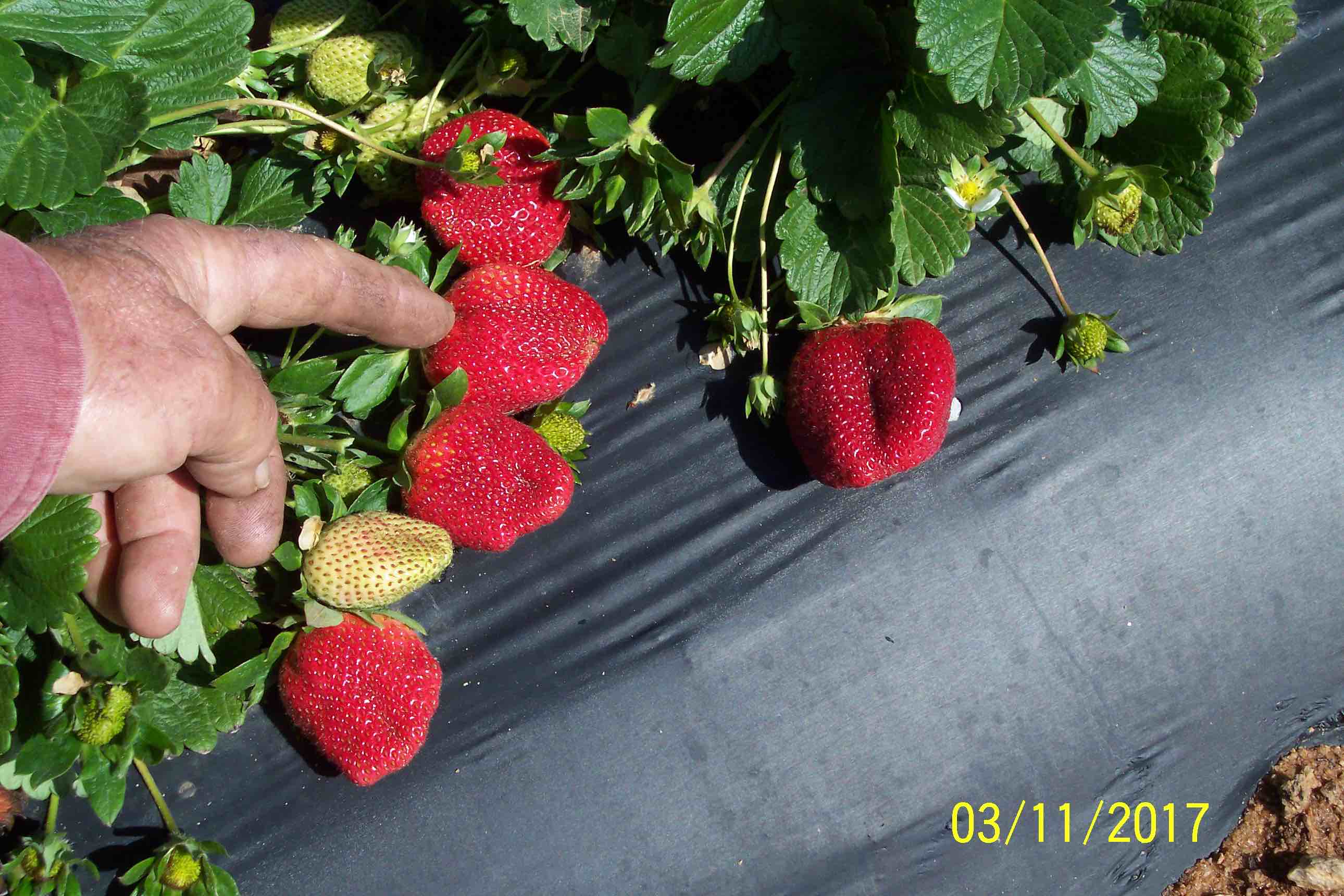 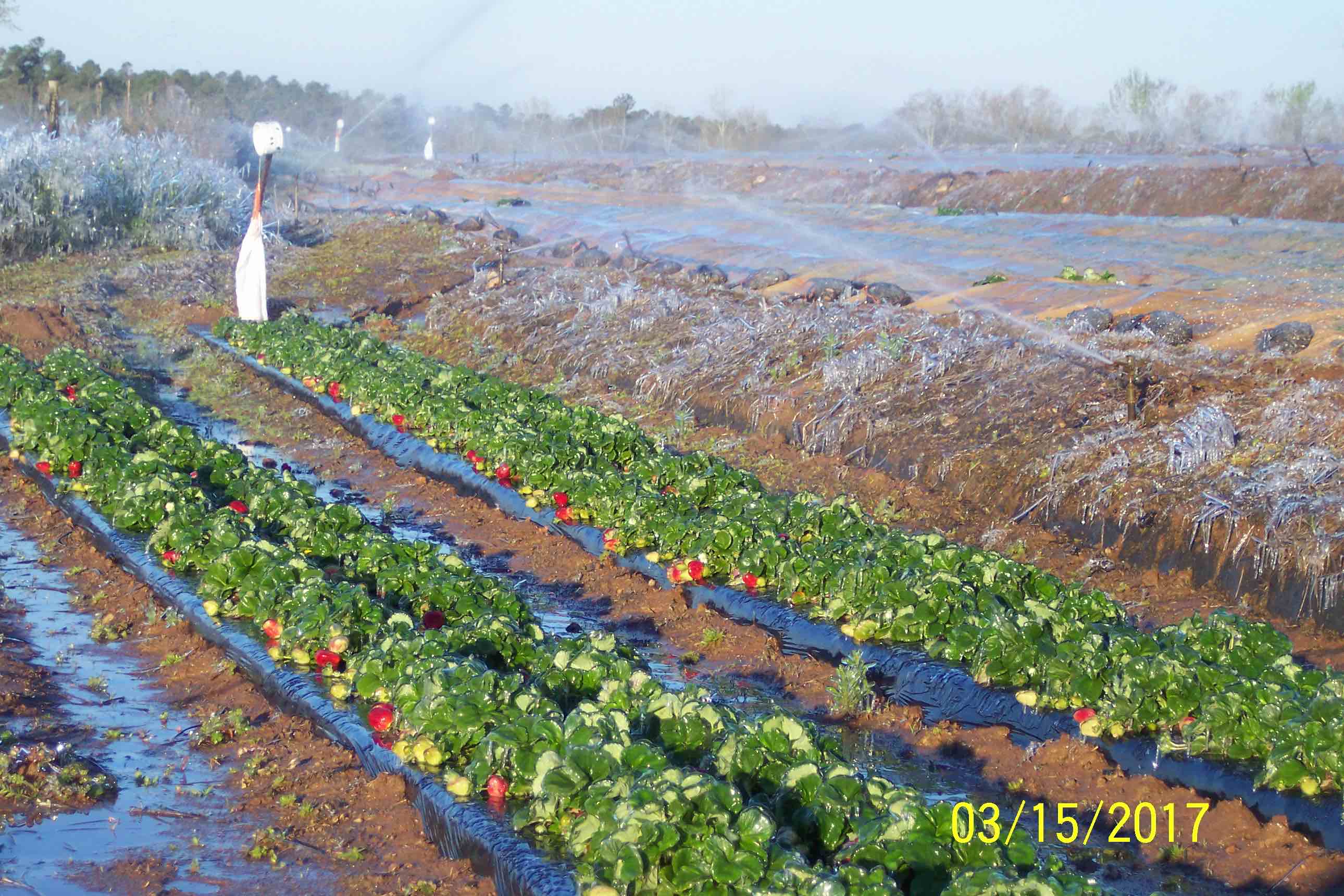 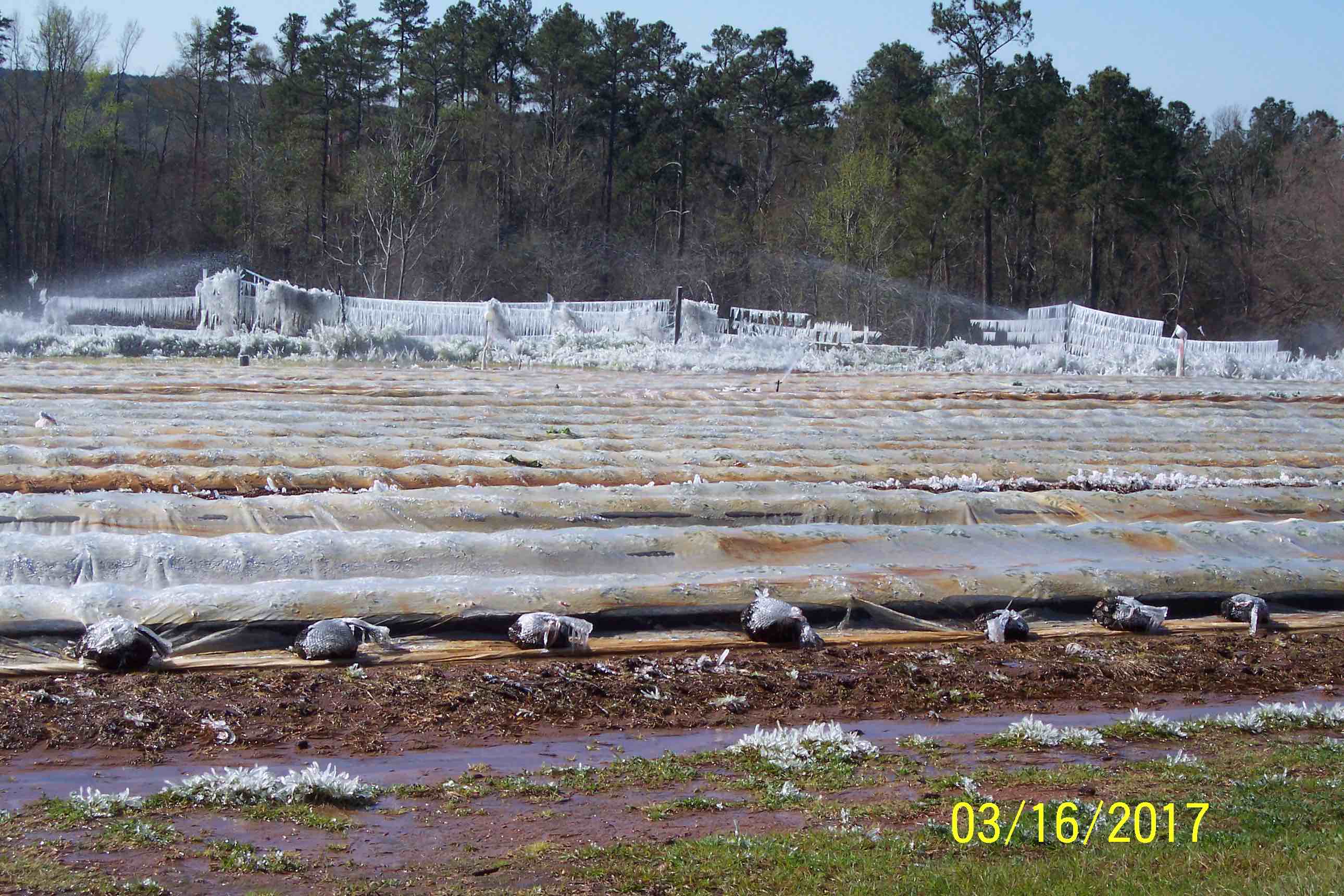 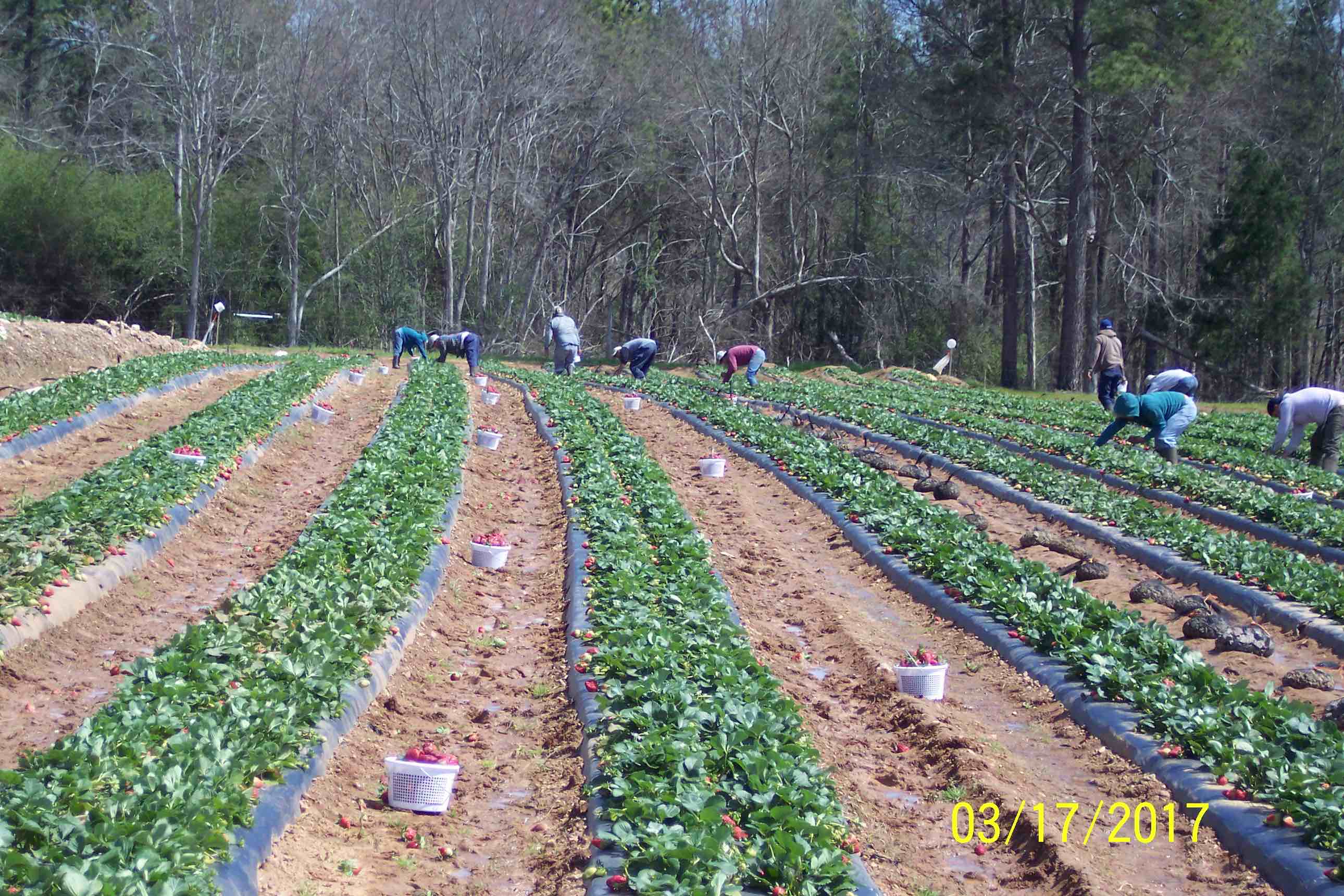 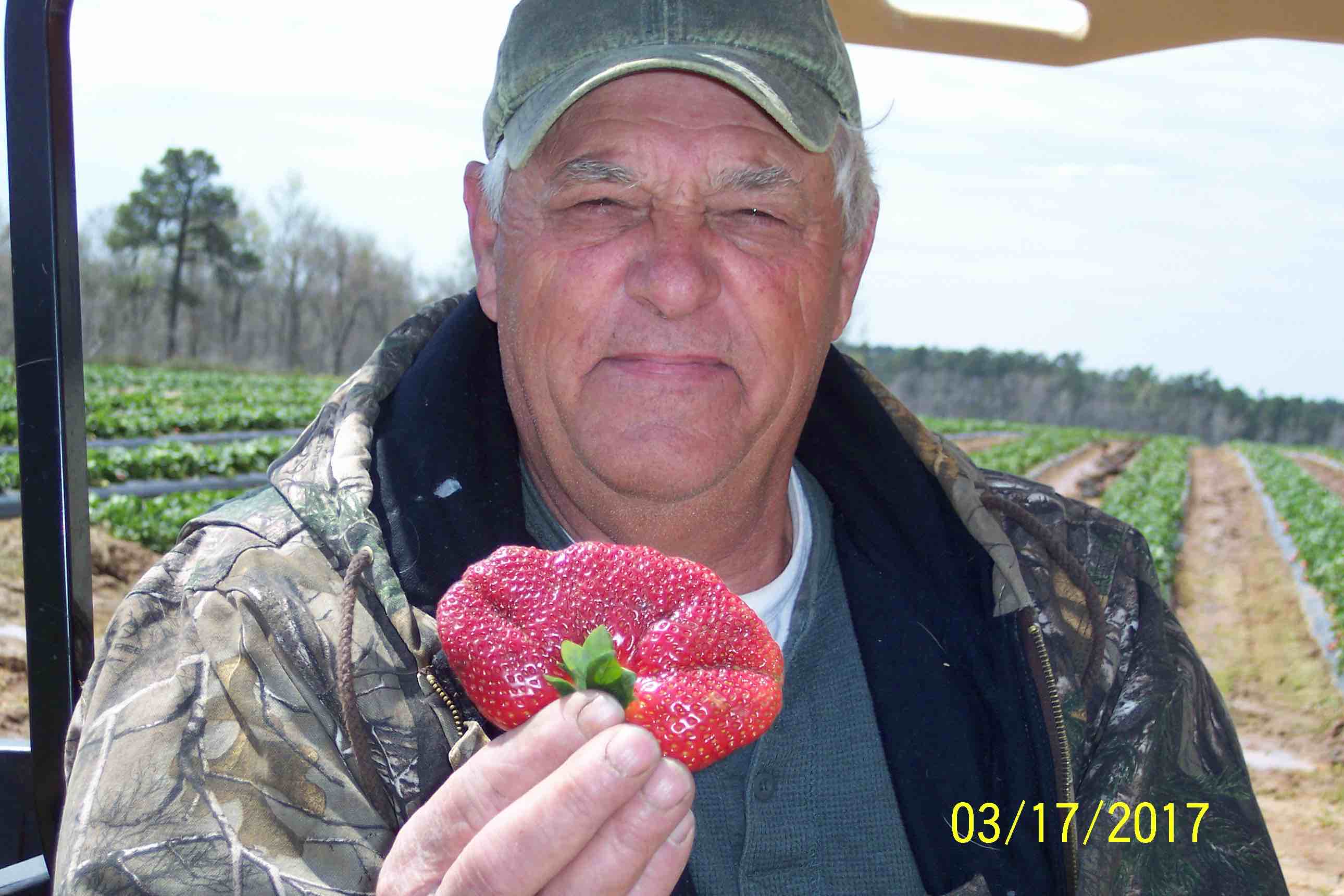 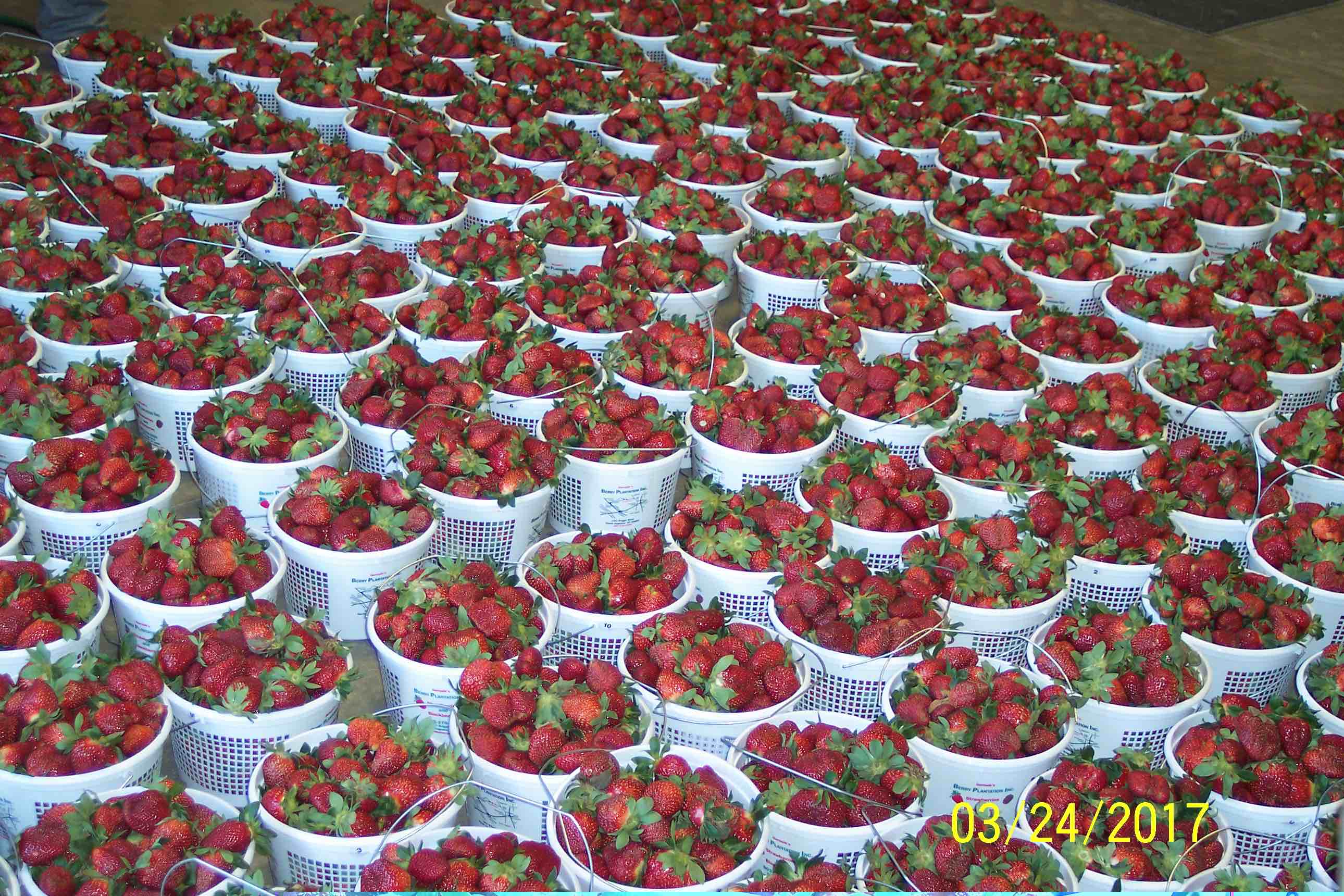