Find this article at:
go.ncsu.edu/readext?452086
— Written By Barclay Poling

The upcoming week will be an active weather period. There is reasonable model agreement and high confidence in the forecasts for the forecast regions until about  March 13.

On Monday, Mar 6 we expect to see a strong, cold high pressure off the Mid Atlantic coast with southwesterly flow and milder temperatures developing across the forecast region Monday and Tuesday. A cold front approaches the region from the west late Tuesday and crosses the area late Tuesday night into Wednesday bringing showers and cooler temperatures to the region. High pressure and clear skies then return Thursday with a slow warming trend starting Friday and lasting through the weekend.

At this time, we lean to the colder solution because of the current large scale forcing mechanisms currently in place that were discussed in the seasonal outlook last week. But at this time there is considerable uncertainty, more than usual, in the forecast beyond one week. It is quite obvious that the current longer range forecasts are quite sensitive to initial conditions. We think at least one reason for this is the strong thermal gradient that has set up between the snow covered land area in Canada and the bare ground in the US. This strong gradient tends to increase the strength of the jet stream and cause very big differences in the weather pattern with a slight change in initial wind conditions. We think this sensitivity will lessen as the snow cover disappears in Canada over the next month, weakening the large-scale US thermal gradient and leading to a trend of slightly above normal temperatures by the April time frame.

Forecast discussion day 3 – 5  (8 Mar – 10 Mar) Temperatures start slightly above normal then cool to below normal; widespread rain showers with scattered thunderstorms likely early-mid period with scattered showers late in the period. Temperatures start above normal, but a cold front will move across the region early to mid-period cooling temperatures below normal by the end of the period. The cold front will bring widespread rain showers with scattered thunderstorms early to mid-period. By late in the period expect lingering scattered rain showers in the mountains with a mix of rain and snow showers in the extreme northern sections of the forecast region. Expect high temperatures to range from the low 40s to low 50s. Low temperatures ranging from the upper 20s to low 30s. Precipitation amounts will likely be in the 0.35 – 0.55” range.

Forecast discussion day 6 – 8:  (11 Mar – 13 Mar) Temperatures warm to above normal; scattered rain showers throughout the period. Expect a large complex low pressure system to form in the Great Plains region and move east-northeast west of the forecast region through the period. This will cause a general mild and moist southwesterly wind flow across the forecast region throughout the period. The southwesterly wind flow will cause above normal temperatures (especially the nighttime temperatures) and scattered showers (especially in the western portions of the forecast region) during the entire period. Expect high temperatures to range from the mid 50s to low 60s. Low temperatures ranging from the mid 30s to low 40s. Precipitation amounts will likely be in the 0.10 (eastern sections) – 0.60” (western sections) range.

Forecast discussion day 9 – 11:  (14 Mar – 16 Mar) Temperatures cool to slightly below normal; widespread rain likely early to mid-period with clearing late in the period. A slow moving cold front will move through the region early to mid-period bringing widespread rain and cooling temperatures across the forecast region. Expect the front to be followed by a large high pressure system that will move into the region from the northwest late in the period. This will clear the skies and keep the temperatures below normal. Expect high temperatures to range from the low 40s to low 50s. Low temperatures ranging from the upper 20s to low 30s. Precipitation amounts will likely be in the 0.40– 0.65” range. 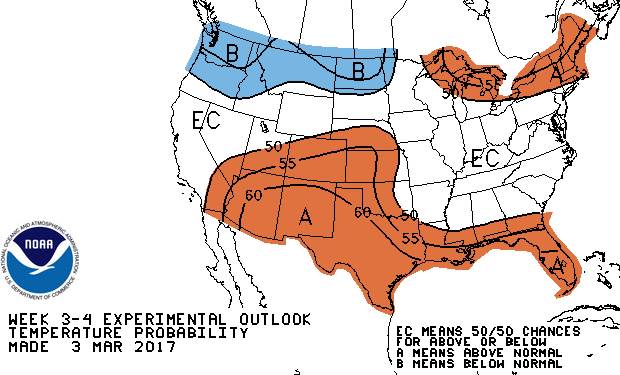 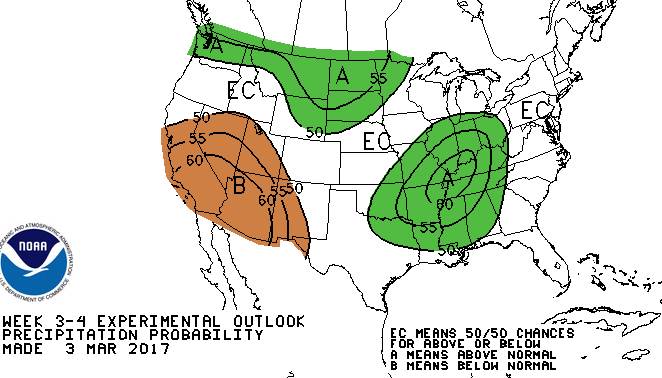 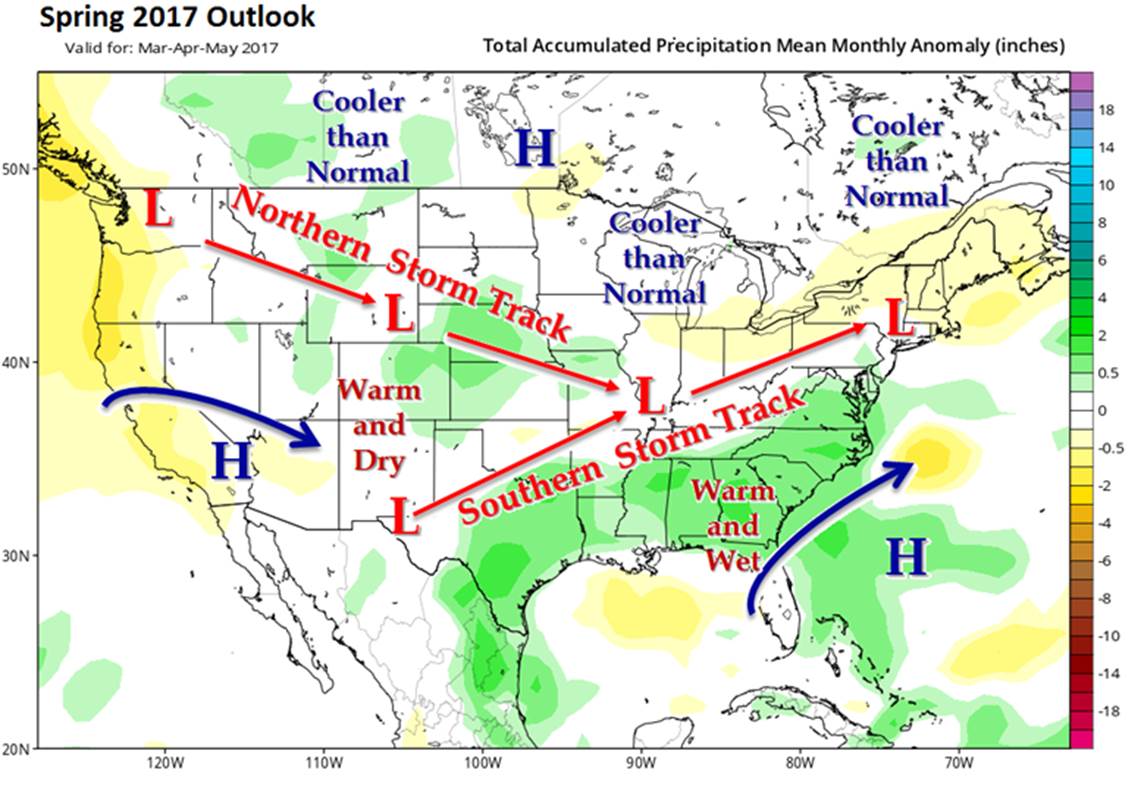