Find this article at:
go.ncsu.edu/readext?448285
— Written By Barclay Poling

Calendars can be pretty tricky!

I recall Ashley Porter (Figure 1) saying to me a few years ago when we were out in his field evaluating the results of his frost protection that, “You’ve got to go by what crop is doing, and not the calendar.” 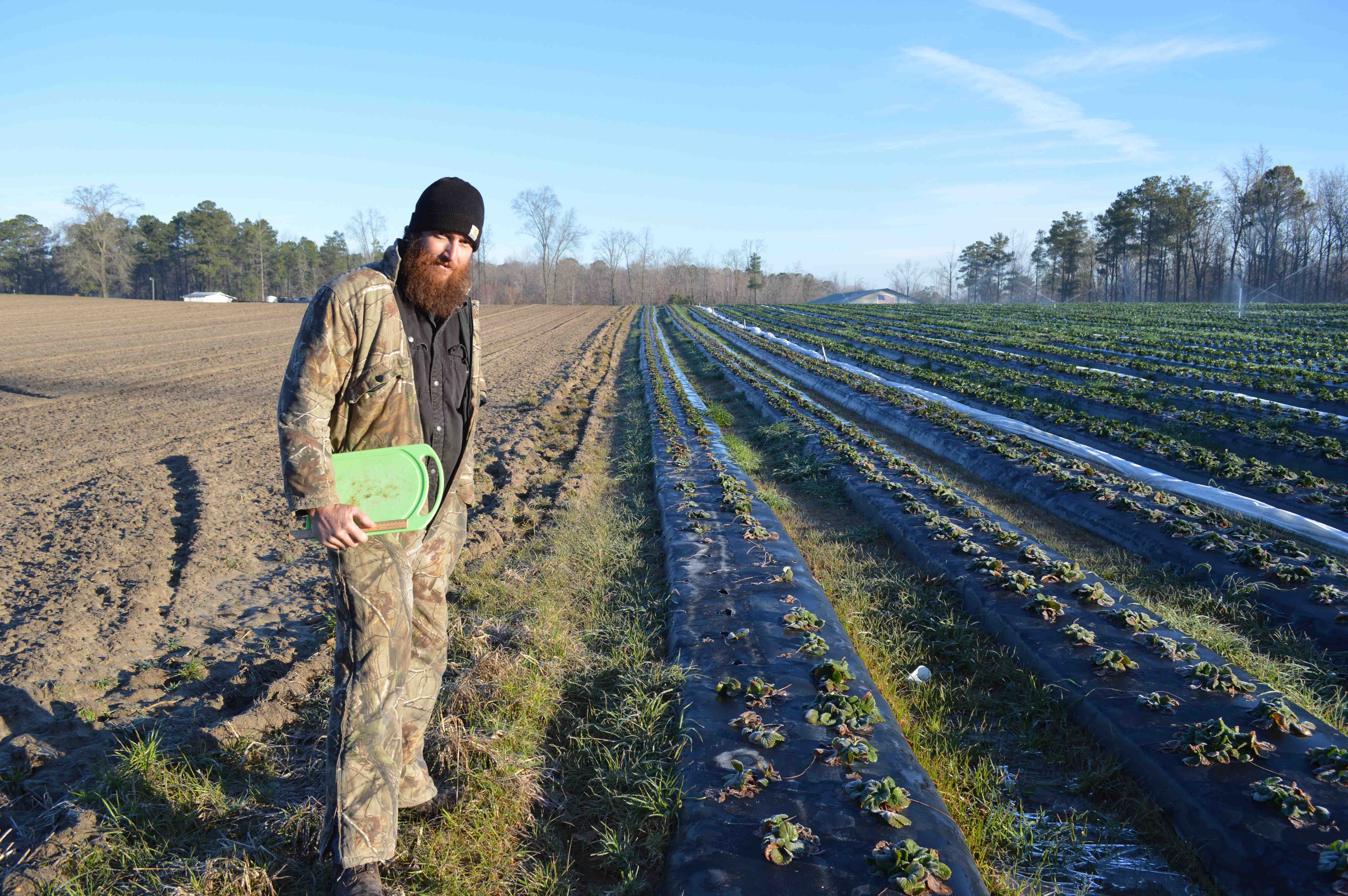 I know that I mentioned earlier this past week that this year’s crop could be running at least 2 weeks ahead of normal. For a farm location in Nashville, NC, I have been tracking Growing Degree Days (GDD) for several years, and I took an hour or so this Saturday morning to simply look at GDD accumulation for month of February 2016 and compare that to February 2017. Now, you must be thinking, how can I make such a comparison without actual data for February 19-28, 2017? The answer is that I took advantage of  the AccuWeather Pro temperature forecast for the rest of this month, and what I came up with was rather shocking year-to-year comparison:

Now, what is interesting here is to look back at 2012 and see that this same location had 128 GDDs from January 1-March 10th. If the AccuWeather forecast holds true for Feb 19-28, 2017 (showing that 76 of the 134 GDD units for Feb 2017 will occur in the 2nd half of this month), then it is quite possible that we are on track for an early strawberry season this year. Of course, we know that weather conditions can change dramatically over the course of strawberry season, but it is very interesting to reflect on this year’s start compared to other years. In 2012, we also had a relatively warm March and April (Table 2), and that was also the year that this Nashville location was open to he public by April 8th (Table 3). I also recall that we had about 5% bloom by the end of February 2012. So, it really is like Ashley Porter says, “Calendars can be pretty tricky!”

I know most growers today don’t have time to “read a lot of information” on so many different subjects, but if I can leave you with one message this Saturday morning it would be that the start to this season is clearly unlike any we’ve seen since 2012. I would also like to say that given the relatively warm forecast for the balance of February, I would be cautious about leaving a row cover on for a more extended period.

I was in communication with Clyde Gurosik late in week (see his information on Strategic Forcing),  and I wrote to Clyde:  “I have been thinking more about strategic forcing, and it turns out that this time of year is ‘perfect’ for ADDING flower buds that would not otherwise develop…15-Day Forecast.”   I was actually referring to the fact that with days of less than 12 hours in length (right now 11 hours), and temperatures in the 60s and 70s during the day, and 50s at night, it would be possible to ADD FLOWERS that would show up in later season harvests. The 15 day weather forecast I sent Clyde showed most nights in the 40s (below the optimum). Here was Clyde’s response:

“BUMP those”EXPERIENCED” temperatures up about 7F for 1.5 oz covers and we are exactly where we want to be for a “SHORT PERIOD”, especially considering the increasing ground temperatures.

So, I am all on board for bumping those night temperatures up 7 F, but my concern comes with the covers being on during the day, especially on days with temperatures headed into the mid-70s, or higher. For the Nashville, NC, location that I have been examining for this advisory, I have noted that for the period from Feb. 19 – 28,  AccuWeather Pro is forecasting that 6 of those 10 days will be in the 70s (Nashville, NC). Ideally, we would have no cover on during the daytime for those warmer days (it’s not needed). But, I also know it is not practical to be pulling covers back on each afternoon, and then taking them off again in the morning! The open canopy in the day would also favor pollination of the earliest flowers. However, this is not practical to do!
I found it very instructive to read Clyde’s notes on Strategic Forcing regarding pollination:
“The weather during the natural hours of pollinator foraging during late February and March (often wet, windy, cloudy or below 60F), may not be controllable to enhance bee activity, but the canopy can be changed to promote more wind activity and make the flowers more conspicuous and attractive to any pollinators that will work. This appears to work at our specific location, but must be tied closely to the end of dormancy, (ground temperature dependent), and ended quickly to permit more natural wind and pollinator access.”
So, I believe there is benefit to “strategic forcing” technique, but what I would do is take into consideration that our weather pattern this February is on the warm side, and I would recommend a somewhat shorter period of having the covers “on”  if these warmer conditions continue. Probably not more than 2 weeks, and maybe 10-12 days in a year like this?
By all means, please review Clyde’s 2 notes and his recommendations about soil temperature — STRAWBERRY STRATEGIC FORCING
STRATEGIC FORCING

Finally, we had some comments in an advisory earlier this week about N fertility, and the need to start injections at the time you are seeing new blooms. I wish to pass on Clyde’s experience with early N applications:

I agree for Chandler and Sweet Charlie, BUT NOT for CAMAROSA. Cams will SPLIT wide open unless they have some actual fruit load, “BEEN THERE, DONE THAT”!! One of the benefits of getting OLD or as I like to call it MATURE. Hope this is helpful.
Sincerely,

Finally, there is ONE CALENDAR issue that I would like to point out:  It’s only February 18th, and we’ve got a lot of weather to go between now and early April. I say early April because the Easter Freeze of 2007 occurred on April 7-8. Because the period from mid-February until early April can be so hazardous, I wish to share my special thanks with our industry members who are helping with the weekly Outlooks (one is coming out tomorrow), and I would like to once again recognize the good folks at Aarons Creek Farms (Buffalo Jct, VA); Cottle Strawberry Nursery (Faison, NC); and Westech Agriculture Ltd (Alberton, PEI, Canada), for their generosity in  supporting this custom forecast product.