Find this article at:
go.ncsu.edu/readext?412874
— Written By Barclay Poling and last updated by Brandon Hopper

There are some major questions on the details of the precipitation forecast  for the  period beginning May 31 as models disagree significantly on the formation of a warm tropical system type low off of the FL coast. The models disagree on whether the low will form or not and also if it forms the exact location and movement of the low. But there is high confidence that the temperature will be near to above normal the entire period with very little threat for significantly colder than normal  weather the entire 30 day period.

In summary, we are definitely moving to a warmer period by the end of this week and looks also to be drier. But,  by how much  is  still a question mark??? We still think at least normal precipitation on average through the rest of May. Note that the week 3 -4 statistically based models keep the trend of  normal to above normal precipitation. There are factors that would tend to move to dryer than normal conditions as we get into June. But other factors favor a more normal precipitation.

Hope you have a great week!

Part A. Forecast discussions for each three day period from 25 May – 5 June:

Forecast discussion day 6 – 8: (28 May – 30 May) Temperatures well above normal to start, then drop to slightly below average by the end of the period; periods of showers the entire period. The previously mention high pressure system will slowly recede to the east during this period. The high pressure system will tend to keep skies partly cloudy with widely scattered showers and temperatures above average early in the period. By mid to late in the period expect clouds to increase with a greater chance of showers as a weak low pressure system and front slowly approach from the west. The increase in clouds will likely lower the max afternoon temperature to slightly below average, but keep the minimum temperatures above the seasonal average. The low pressure system will likely weaken as it moves into the region as a high pressure system forms in New England and move southeast along the mid-Atlantic coast. Expect high temperatures ranging from mid to high 80s for the beginning of the period then drop to below average with highs in the upper 60s to low 70s near the end of the period. Low temperatures will continue to be above average in the low 60s range. Precipitation appears to most likely be scattered showers early in the period to more widespread showers near the end of the period. Expect total rainfall amounts to be in generally  0.30”- 0.50” range  buts some locations could see up to  1.75” with heavier showers, mainly in Eastern NC, Eastern SC, and Southeastern VA.

Forecast discussion day 9 – 11: (31 May – 02 Jun) Temperatures near normal; periods of rain the entire period. There is significant model disagreement for this period but currently expect an early season tropical low pressure system (wave) to form near the FL coast during the period. If the low pressure system forms as expected it will develop a moist east wind flow across the region with periods of off and on rain the entire period. Expect below normal high temperatures in the low 70s to mid 70s and above average low temperatures in the low to mid 60s during this period. Precipitation amounts will likely be in the  0.25” – 0.50” with higher amount possible in some locations.

Forecast discussion day 12 – 14:  (03 Jun – 05 Jun) Temperatures slightly above normal; mostly dry entire period.  The forecast for this period also has high uncertainty because of the disagreement among models. If the early season tropical low pressure system forms, it is expected to move northeast and out sea early in the period with high pressure moving into the region mid to late in the period. During the period expect the trend to dry conditions and slightly above normal high temperatures with highs in the mid 70s to mid 80s and above average low temperatures in the upper 50s to  low 60s during to continue this period. Precipitation amounts will again likely be in the 0.00” – 0.10” with higher amount possible in some locations. 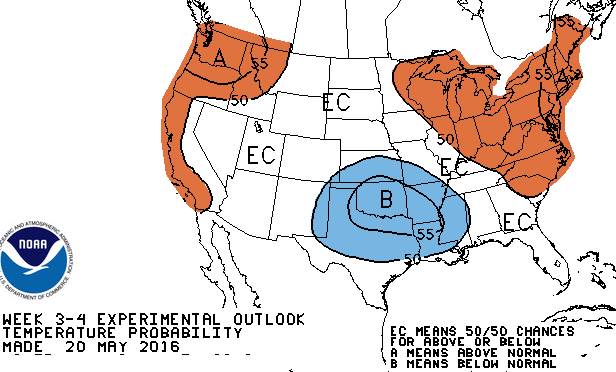 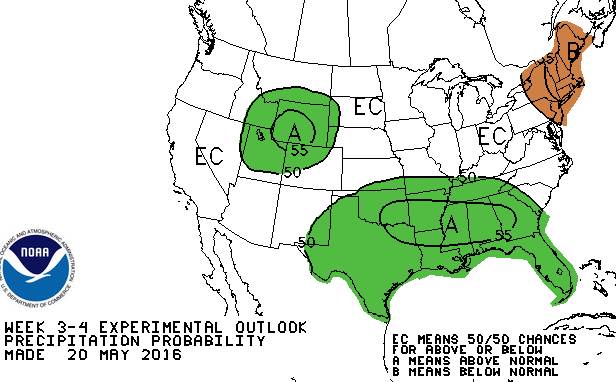