Find this article at:
go.ncsu.edu/readext?411953
— Written By Barclay Poling and last updated by Brandon Hopper

It looks like temperatures over the next  few days will be below average, and there will even be a chance of frost in some areas! Then, things warm up and stay wet. Precipitation will be average through the rest of May. Also,  the longer range (week 3 -4) models have dropped the trend to dryer than normal.

Hope you have a great week!

Forecast discussion day 3 – 5 (18 May – 20 May) Temperatures stay cool, slightly below normal; with showers early to mid in the period.  Expect a low pressure system to develop along a slow moving warm frontal system. The low is expected to move from west to east along the front to the south of the region during the period. This will likely keep temperatures on the cool side of normal the entire period with showers expected early to mid-period especially in the southern half of the region. Expect highs to range from upper 60s to upper70s and lows in upper 40s to mid 50s. Precipitation amounts expected to be in 0.25” – 0.35” range in the southern half – lesser amount to the northern half.

Forecast discussion day 6 – 8: (21 May – 23 May) Temperatures warm to near normal; showers mid period.  Expect a large high pressure system to slowly move through the region from west to east during this period. Expect the high pressure system to allow for a slow warming trend with mostly clear skies. Quasi stationary front stays to the south with another low pressure wave moving across the southern portions of the region from west to east mid period. Expect showers early to mid-period especially in the southern half of the region. Expect highs to range from low 70s to low 80s and lows from the low 50s to upper 50s. Precipitation amounts expected to be in 0.15” – 0.30”range.

Forecast discussion day 9 – 11: (24 May – 26 May) Temperatures warm to near normal; with widespread showers entire period.

Expect the quasi-stationary frontal boundary to remain in the region with a weak low pressure system and moving along the front that will tend to bring periods of off-and-on showers and even some thunderstorm activity to the region for the entire period. Morning lows will tend to be slightly above average and afternoon highs near the seasonal average. Expect highs to range from upper 70s to low 80s and lows in upper 50s to low 60s. Precipitation amounts expected to be in 0.15” – 0.45”range.

Expect high pressure to move through the regions from the west during the period. This will result in an end to the widespread precipitation with clearing skies and warming temperature to above normal. Expect widely scattered isolated showers early over the entire period with many locations remaining dry. Expect highs to range from low 80s up north to low 90s in the south and lows from the upper  50s to mid 60s. Precipitation amounts expected to be in 0.00” – 0.10”range. 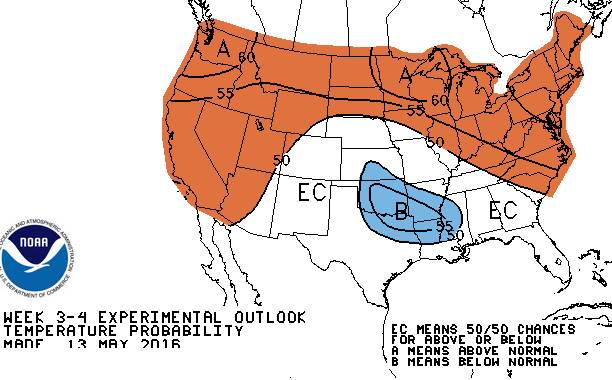 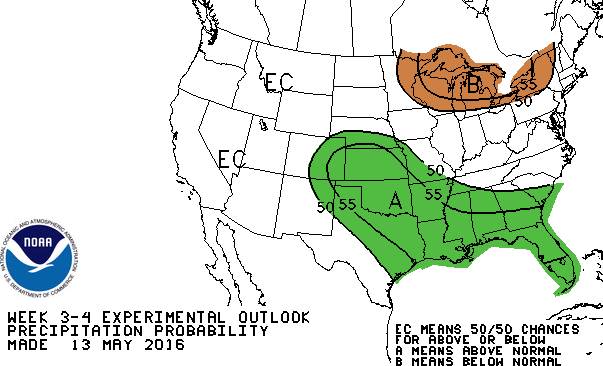