Remarkable Week of Warm Weather – Temperatures Could Be Changing Too Quickly (11:30am, 3/8/16)

Find this article at:
go.ncsu.edu/readext?401242
— Written By Barclay Poling 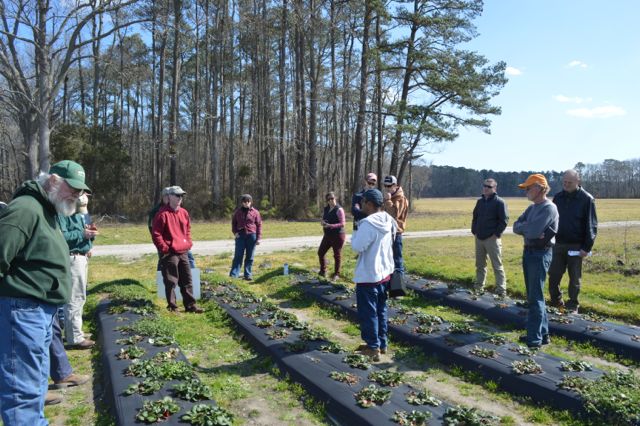 Early last week I participated in the Virginia Strawberry Association’s (VSA) Field Walk in Pungo,  and I don’t think we could have had a more perfect day of weather (Fig. 1). But, by mid-week it turned very cold in Virginia and I recall driving on Highway 64 on Wednesday towards Chesterfield, VA, and highway crews were out salting the highways! But, Thursday night’s snow accumulations were relatively minor across the state, and the salting wasn’t needed.

Hard to believe, but now we are looking at a weather pattern this week that is potentially going to be warm enough to pose a threat to the strawberry plant’s flowering physiology if row covers are not removed.

Fig. 2. Friday may be our warmest day this week. Even with temperatures in the low to mid-80s (see that gray zone in Southeastern NC),  I don’t see any risk with excess heat in situations were the strawberry crop has been uncovered. But, if a row cover is left on top of a strawberry crop in these temperature conditions, it is possible that the temperatures underneath the cover could be headed into the upper 90s, and that is not a good things for a “cool season crop” like strawberries. I am concerned about the impact this may have on strawberry plants in the pre-bloom and early bloom phase. Another  concern is that this heat is happening without any transition.

I would like to make the suggestion that this may be a good time to pull row covers off the strawberry crop, if you have not done so already?

In checking with several growers today, I learned that growers in SC have already gotten their covers off:

Hey Dr. Poling,
Most of the growers I know, including myself, removed covers yesterday prior to the warmth coming in. The past week saw us having temperatures in the upper 20s to low 30s almost nightly, so the majority of us down here were covered up. We personally had our Camarosa plants covered but not our Chandlers. There wasn’t anything to protect on the Chandlers. In hindsight, I wish I would have covered them anyway to boost them along as they may be as much as 10-14 days behind the Camarosas. We have 6-10 blooms per plant on the Cams – and zero on the Chandlers. You can give me your thoughts on this, but I was considering putting a lightweight cover (half ounce) on the Chandlers for a few days to see if I could possibly advance them a bit.

1)  I wish for everyone to note that “most of the growers” who Eric is making reference to in thefoothills of SC have already taken covers off the Camarosa variety. If this variety is already coming into  bloom in your growing area, I would get the covers off — you don’t  need to be “pushing” this variety with warmer temps under the covers!

2) With Chandler, I can see Eric’s logic for leaving the covers on this “lagging” variety. It is also interesting to note that in most years Camarosa and Chandler are actually on a similar ripening schedule. So, I  concur with some “forcing” of Chandler, but I would  not keep the entire crop covered.

So, what worries me about this week?

My worry is too much HEAT!

Remember, the strawberry is a cool season crop, and my concern relates to elevation of temperatures under the cover that may not be desirable for flower development.

Please be aware that Florida growers just experienced the longest GAP in fruiting in it’s modern history – a gap is, as it sounds, is a period of NO FRUIT, and this GAP occurred because of an excessively warm period in the month of November!

Background:  In most years, Florida begins harvest in November, and continues to pick through the entire winter, but volumes drop off as temperatures cool down in late Dec/early Jan. But, as temperatures begin to warm again in the 2nd half of January, picking resumes, and by early Feb this region of the country can be picking excellent volumes BEFORE VALENTINE’S DAY. Unfortunately, the crop did not resume production until about Valentine’s Day, and  did not  “get going” until the second half of February. RECORD heat in Nov 2015, as well as a very warm December, contributed to the lateness of this year’s strawberry crop in Florida. The extreme heat that occurred in Florida last Nov/Dec ultimately served to delay the crop’s fruiting season by about 2 weeks. It is very interesting note how this heat coincided with the crop’s pre-bloom period.

It turns out that our region is about to (rapidly) transition from pre-bloom to bloom stage, and I am relating this year’s  Florida strawberry crop story  to make the point that warm to very hot temperatures can potentially interfere with the pre-bloom/early bloom crop stages.

In some seasons, like last year, I understand the importance of pushing a strawberry crop by leaving  row covers “on” in the month March when the month of February is unseasonably cold. But, that did not happen this year.

We actually had some pretty decent growing degree day accumulations for the month of Feb this year by comparison to 2015. Later this week I will share some exact growing degree day information for the strawberry crop at Clayton, but what I am seeing right now is a crop that is advancing nicely. In other words, I believe we are on a very good ripening schedule for the 2016 berry season.

Grower reports on crop stage today: (please send your crop reports to share with other growers)

Barclay,
SC and Camarosa are about 80% average of “one” open viable (live) bloom. More emerged buds on Sweet Charlie than other two varieties. Chandlers are about 50% one viable open bloom. Thanks.
Billy

2. Foothills, SC:
Our season (Camarosa) appears to be far ahead of a normal year – possibly two weeks ahead. Our Chandlers may be more in line with a normal year. We will begin fertilization this week and make our first spray as well. Rains are coming in for the weekend, so we’re gonna shoot for a botrytis spray on Friday on the Cams.
Also, everyone down here that cleaned up in early-mid February are now seeing more dead foliage due the freezes since then. Of course it isn’t as bad as it was, but still a fair amount of damaged foliage. I don’t think anyone is going back a second time to clean. Eric Hunter, Easley

My reaction on “clean up” operations:

PLEASE BE VERY CAREFUL WITH “BRUSHING PLANTS” ONCE THEY HAVE BROKEN DORMANCY. ONCE THAT DORMANCY IS BROKEN, IT IS VERY DIFFICULT TO DO A CLEAN UP OPERATION WITHOUT CAUSING INJURY TO THE PLANT. 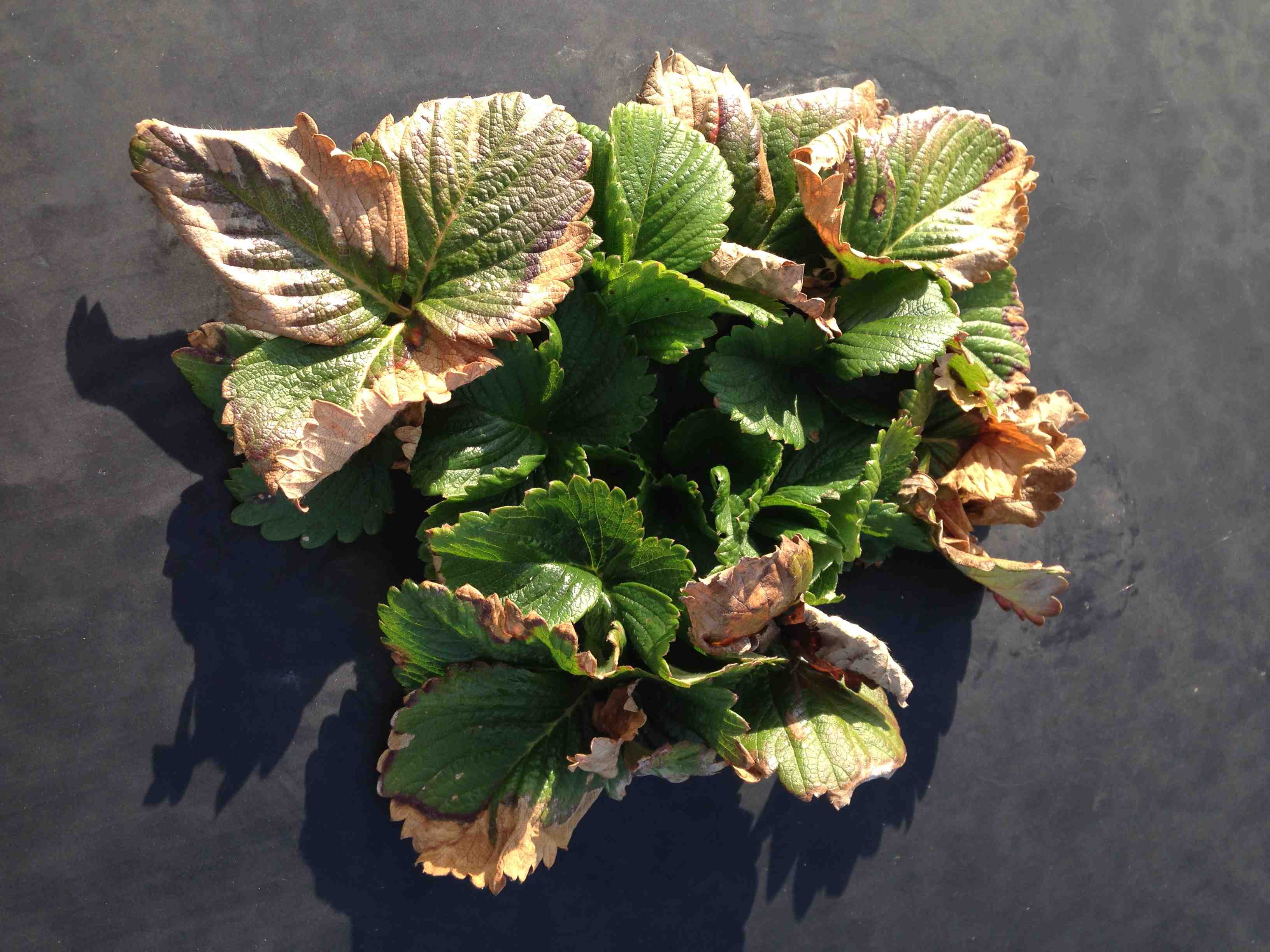 Fig. 3. This plant has broken its dormancy (note the center of the plant where new leaves are emerging), and once this occurs it becomes increasingly difficult to do a “clean up.”  Field sanitation operations normally require brushing the plant, and this brushing can injure newly emerging leaves. The heat this week will close the window for field sanitation for the 2015-2016 crop.