Quick Snapshot of How Cold It Could Get in North Carolina Next Week and Grower Questions! (9am, 1/15/16)

Find this article at:
go.ncsu.edu/readext?390473
— Written By Barclay Poling

Fig. 1. On Tuesday morning next week some sections of the Piedmont could see minimums in low single digits. The dark green areas indicate lows in range of 12-14 F. Lighter green areas (much of piedmont), could see 14-16 F. If you are in an area headed for low teens early next week, it may be well to consider a row cover application. Many growers already have covers on, and have elected to leave them on for the colder mornings we experienced this week. However, next week we may see the coldest temperatures of the year in NC.

A Iook at my morning SkyBit for Clayton, I saw a 14 F minimum on Tuesday at canopy height. Previously, they were only calling for 17 F (that’s a 3 degree drop – not a good trend). I will be adding more information to this advisory as the morning goes on, but wanted to ALERT folks of this development so you could consider the low temps your area may be seeing next week, and perhaps make a decision soon to apply covers. Rain is also in forecast at Clayton at about 1 p.m. this afternoon.

One of your updates a few days ago addressed the issue of early blooms before dormancy and the effect on yield. If you would, send that to me again.

Well,  I did not really address this question as I have been carefully reviewing the situation and talking to some veteran growers in VA, NC and SC about how we should manage the crop from this point forward. Next week could be a critical week for protecting the remaining crop with covers.

But, covers are not needed for days in winter with minimum temperatures are in the 20s or 30s, and the crop’s flower buds in crowns could even be tolerant to mid teens right now with recent chilling. We really do not have a handle on just how hardy these buds may be this year? We only started to get some decent chilling in the last 1 1/2 weeks. What I mean by chilling are temps near freezing and into the 20s. These temperatures are essential to hardening of plant. Prior to these recent colder days and nights, we were  in a December and early January heatwave. Something that no one has ever seen happen before, and it caused many fields in Eastern, NC, to go into what looked like full bloom! Fields were snow white on Christmas Eve day.

It is true that we have had something similar happen back in 2011-2012 (a very mild fall and winter), but I do remember that in 2012, we remained very mild January and February. That ain’t happening this year! Just read all the recent postings on this advisory service, including the one last night where Dr. Schlegal is forecasting:

“The colder weather pattern that has been in place for awhile is likely to continue
though at least mid-February and probably the entire month of February.”

The pattern is becoming more favorable for below average temperatures to persist through much of March.

Thus, there will be no more replacement blooms for the rest of this winter. You must have above average temperatures to achieve additional floral bud development in late winter. The very mild temperatures in Nov/Dec 2015 were highly favorable for replacement blooms, and that was a very good thing, as we lost a bunch of blooms this month: 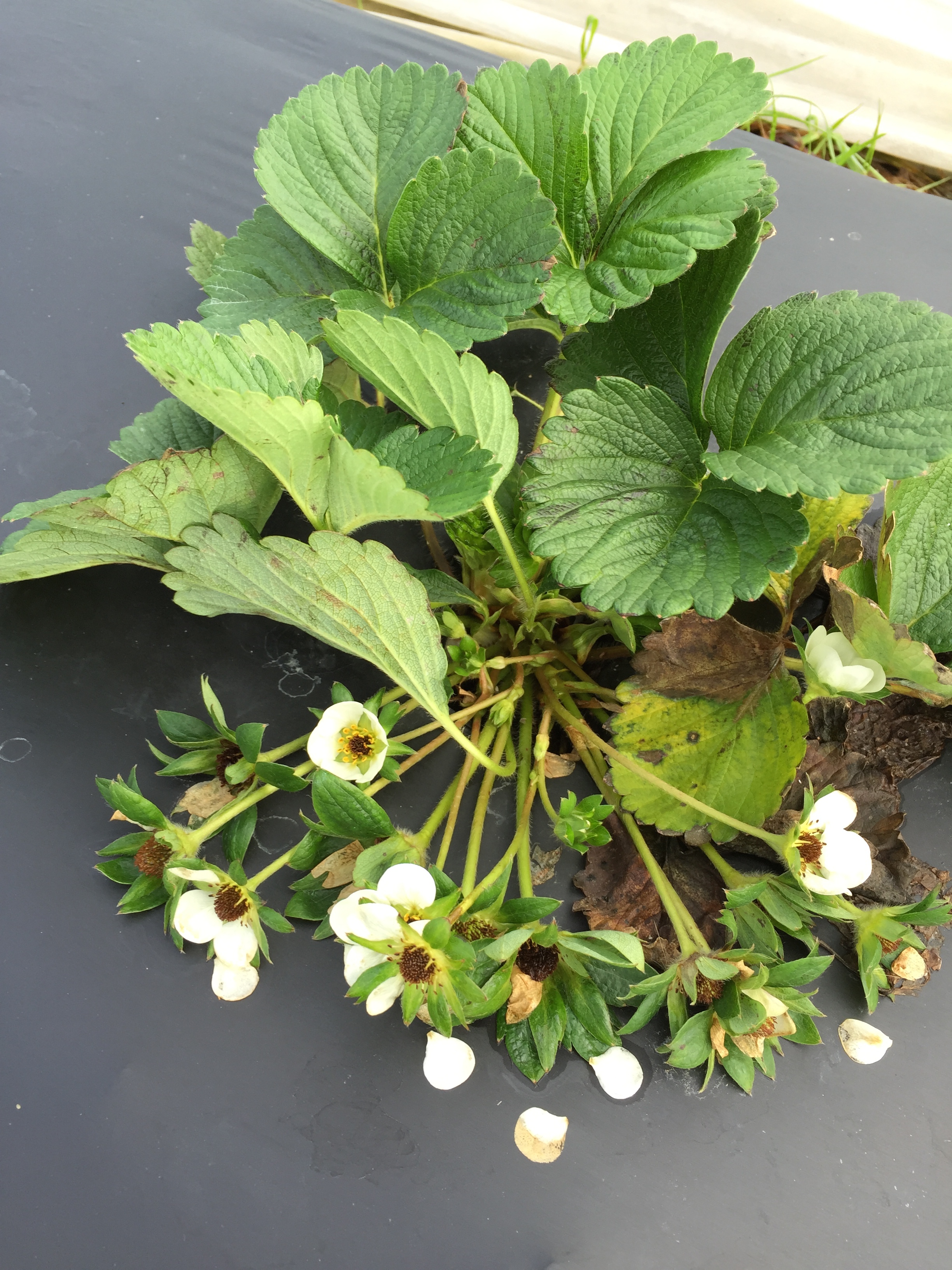 During periods in January 2016 when row covers will NOT be needed for cold protection, be sure to get those covers off and deal with removal of those dead blossoms and green fruit that came out in December and early January. The second half of January is the normal time to do crop sanitation, manage weeds, and treat annual rye-grass, and also to submit samples to Clemson for botrytis resistance testing!

It now looks like are going to colder than normal right into March, and growers need to do all they can to preserve and protect the remaining viable buds in the crowns, especially for a variety like Sweet Charlie which has pushed out so much crop! Also, do not believe for a second that you are helping to  protect the remaining crop by leaving the row covers on in January and early February when the minimums are only going to be in the 20s and 30s. Protection could be needed for early next week because of the potential for low teens in many areas, and possibly single digits in mountains. But, be very careful about leaving these covers on for more extended periods, unless you are trying to force your crop ahead of a normal ripening schedule? With the cold weather now extending into March (possibly), it has occurred to me that having row covers on at this time, and possibly into Feb could help advance the crop by a week to 10 days. But, there is definite risk associated with this strategy! And, the trade-off could be really painful if you push the crop ahead in its development by a week to two weeks, and then get smashed with an arctic clipper! I might venture out on the crop forcing limb a little ways, but not too far. And, this should only be considered for just a portion of the crop.

In summary,  I do feel some definite concern about just how deep our reserve of high quality blooms may be? Especially, in varieties like Sweet Charlie that have already pushed out so much crop ahead of schedule. For this reason, my advice is to keep a real focus on preserving what remaining crop you have, and to be extra cautious about leaving covers on for an extended period. Even a week  to 10 days of continuous covers at this time of year in the mid-South can “force out” out more internal flower buds. And,these may be some of your best flower buds!

I am afraid that aggressive use of covers at this time in winter (leaving them on for extended periods), could have the effect of pushing out high quality blooms in February — and, these are the blooms you really don’t want to see until later in March!We also know from recent  forecasts of cold through the rest of this winter,  that we won’t be getting any more flower buds in Jan-Feb-March of this year — unlike 2012.

Bottom-line:  My advice is to play it safe right now. We are dealing with an unprecedented situation with this season’s crop. No one has ever had experience with a strawberry crop that entered such heavy bloom, as this one did, in December and early January of this year. We do know that for a quality crop, you need quality blooms! And, I recommend  AGAINST the using row covers for extended periods in Jan and early Feb unless you are interested in earlier berries, and even then, I would be very very careful with this procedure due to the risk of more arctic clippers in January and February. Fortunately, the crop has acquired in recent weeks some good hardening, and it would be unfortunate to “undo” that crop hardening with a row cover blanket that can really elevate temperatures under the cover on a sunny day in winter. Covers do serve a VIP purpose at this time of year to protect the crowns and flower buds against more severe freezes, but after the event has passed, the crop is better off without a cover.

I enjoyed the email this morning regarding the upcoming cold temps and especially your answer to the question of winter blooms and its effect on yield. I believe you are dead on about protecting what we have left, especially in comparison to 2011-12 when we had the mild January and February.

It got me to thinking…typically in a normal year for us, we will have a very cold period in late February or early March (and sometimes even later) where we may get into the single digits (such as the past 2 years) and we will lose everything that’s in the top of the crown and exposed. That’s usually 6-10 berries (buds/popcorn/etc.) or even a few more. That’s very similar to where we are right now – having lost that fruit already. What we don’t need at this point are conditions that will worsen that. The upside is that this mild fall and winter has helped us produce probably a great deal of fruit prior to now…but that has stopped. Thus protecting what we have left is critical. I tend to think that losing what we have already lost may be a blessing in disguise for those of us that used row covers during the fall and have larger than preferred plants at this point. Perhaps our plants received a beneficial “natural thinning” of the crop. We won’t know for sure until the springtime to be sure. And I probably say this every year, but the upcoming few months will be critical for smart row cover usage. Not only that, but I think it row covers has become one of the most important tools that we as growers have. I think they have become a “must have” to the industry.