Find this article at:
go.ncsu.edu/readext?350168
— Written By Barclay Poling

A. What Growers are saying this morning about potential for Easter frost

B. What two VA Growers said about Frost on April 2

A. What Growers are saying this morning about potential for Easter frost:

“This weather is driving me crazy. Can’t seem to get anything done..thanks for the update (the table below was sent to Ron early this morning) 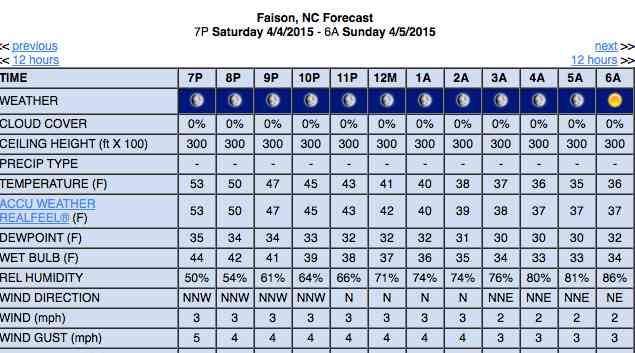 Table 1. Ron’s operation is located in Faison, and it would appear from AccuWeather that this area could see some frost on Sunday morning. Note the clear skies, dew points near freezing (32), light winds, and minimum temp of 35 at 5 a.m.

AWIS is not telling us what we want to know. These were/are AWIS forecasts for Easter Sunday morning:

This morning’s SkyBit is similar.

We need a training meeting for weather forecasters so they can learn how to get us better weather! Do you think they would come?

Editor’s reply – to be very frank, I don’t think we would attract many forecasters. The whole AG area has not been as attractive for these professionals to work in, and many former AG meteorologists  are working in energy field. Its all about those greener pastures!

B. What two VA Growers said about Frost on April 2:

The warning (April 1) wasn’t an April Fool in our area. Low of 33 with heavy frost still out at 7:00 a.m.. Problem was I didn’t check the forecast or advisory yesterday afternoon or evening (we use only row cover); didn’t catch the changes and lost my first flush of blooms on Sweet Charlie. Chandler are still building up steam for first blooms.

A check soon after sunrise showed not a “humdinger” frost but a “good” frost everywhere including the ground.

WeatherUnderground lows were near 6:45 a.m., 33.8 F at Pungo, 32.2 (!) at Chesapeake. Winds were dead flat most of the night, especially at coldest times. (I was sawing logs but Wunderground charts are amazing!)

Of note:  We have a lot of black-lesions damage on leaves. Wondered if we “did” something but Roy Flanagan was on four farms Tuesday, including ours. Roy attributes it to tender foliage damaged by the March 28 freeze. Newly-emerged leaves are fine.

Editor reply:  I sent this photo to Tom and Roy last night from a strawberry plant on my back deck in Raleigh – I believe it had some of this damage: 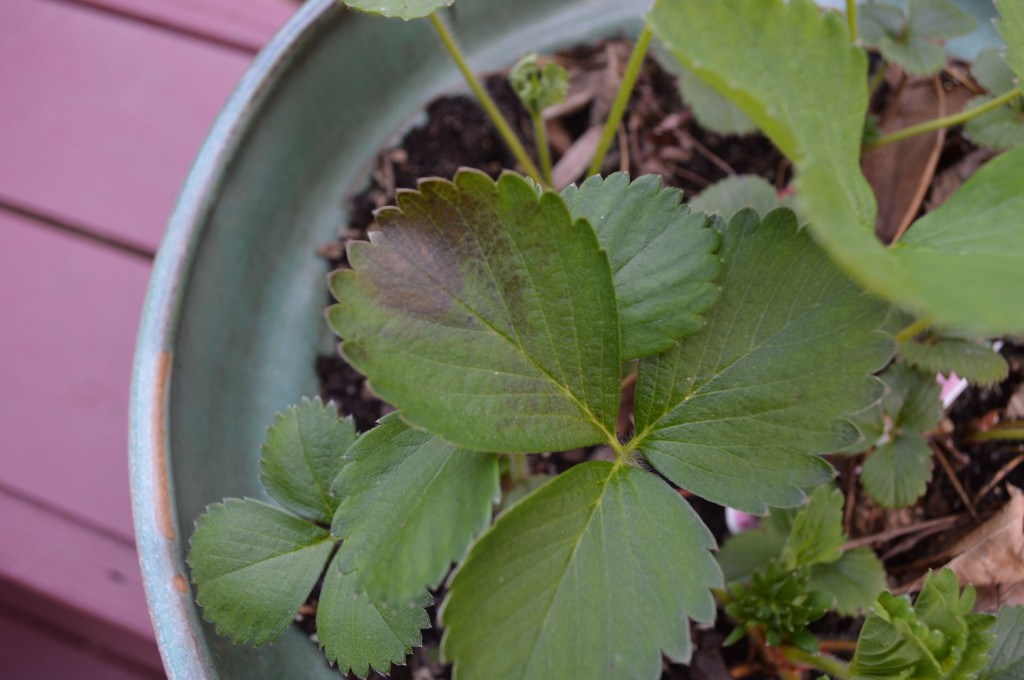 “Its funny you mention heat and drip (Editor – I sent Eric a note last evening about his watering practice right now). I noticed yesterday that a few of our Camarosa plants were wilting. I don’t think I have been as proactive with the watering as I should have been – we have had several days in the low 80s. I will start being better with that tomorrow – I’ll do about 2 hours or so tomorrow, and probably get onto a daily schedule of 2 hours as long as its warm. I usually try to do 2 hours every other day under normal conditions.”

Interesting to note we’re still running behind last year in GDD’s. Last year we were only open a few hours Mothers Day weekend.
Overall, I thought we were slightly ahead just by observing plants, though we just can’t seem to get those Chandlers to bloom.

Thoughts? (Editor’s reply – I will address crop ripening early next week – I am asking for grower reports like yours to make this a valuable report – I have asked SC Specialists and Agents for input this morning on SC crop)

Thanks for the advisories.

Another round of cold air will move into the mid-Atlantic region Saturday,
setting the stage for frosts and freezes as far south as North Carolina Sunday
morning. Warmer weather will return Monday and last until more cold air arrives
on the 8th. Frost is possible Thursday April 9th if enough cold air arrives.
After April 10th, temperatures should be more seasonable, averaging 1-3
degrees F below normal for the remainder of the month.

Precipitation should be close to average through April.

Next update will be Saturday morning.