Find this article at:
go.ncsu.edu/readext?353592
— Written By Barclay Poling 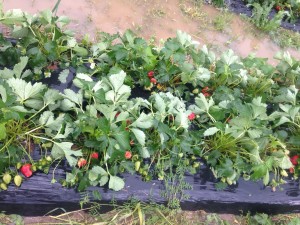 Hail Damage Occurred Across the Region on 4/20/15

Dear Growers, Agents, Agronomists and Others,

An AccuWeather meteorologist made a forecast last Sunday (4/19) that this would be a “Less Active Week Ahead” in the Southeastern US! But, it turned out to be anything but a dull week of weather in our region. Here are just a few of the highlights of this remarkably “active” week just past:

4/20 (Black Monday):  On late Monday afternoon I received reports of hail storms at a South Carolina strawberry farm that had barely just opened  (Fig. 1); and, later that same day  I received photos of more hail damage to a strawberry farm in Maryland that was  less 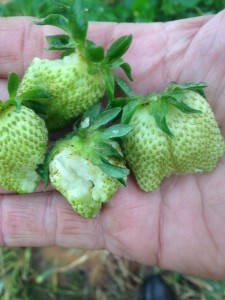 Fig. 1. Hail the size of a quarter did significant damage to a Camarosa crop in the Foothills of South Carolina on Monday afternoon. At this same location the grower had an additional 3 inches of rain (on top of all the rain over the previous weekend); and it was virtually impossible to get back on the field for 48 hours (too soggy), to apply the recommended fungicide(s) after an event like this.

far along in development, but the damage to open blooms (Fig. 3), green fruit (Fig. 4) and canopy (Fig. 5) was very evident. 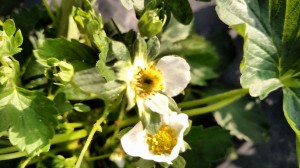 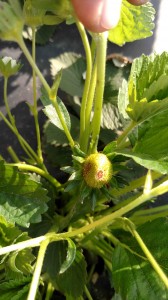 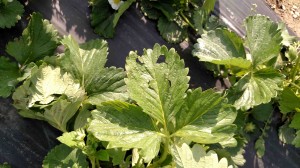 As if that wasn’t enough bad weather for the week, on  4/21 (Tue) came our first indication of frost coming Friday (4/24). But, at least Tuesday was one of the nicest days we’ve had all spring.

By Wednesday, (4/22) we all started to take the Friday frost more seriously (Fig. 6). Those pink and purple areas represent minimums of 30-32, and 28-30, respectively. And, then on Thursday (4/23), I had a long call with Kenneth Rudd (Greensboro), who wasn’t just concerned about frost on strawberries, but also all the other tender crops they had just planted!

On Thursday (4/23), AWIS issued this low temperature map (Fig. 7), and though AWIS was not forecasting frost in Greensboro, it was calling for frost in Statesville (to the west of GSO), even though Greensboro and Statesville had identical minimum air temperature forecasts of 37 F. They both also had clear skies in the forecast for Thur night/Friday morning, and identical winds. The only difference between the two locations was a slightly higher dew point in Statesville.

Fig. 7. A slight worry about frost in the piedmont went to a real worry on Thursday (4/23) when AWIS issued this new forecast for Friday. As it turned out a frost did happen Friday morning, but not in many of the places expected. A grower near Williamsburg, VA, had a serious frost event, but further north in Waldorf, MD, it was a non-event due to winds during the night.

Unfortunately, the weather turned cloudy Friday afternoon in much of the region, and then rains rolled in again Saturday (4/25) — spoiling some regional Strawberry Festivals, and conditions became downright wintry today (Sunday) across much of North Carolina. Like I said at the outset of this advisory, this past week was anything but dull. And, all along the way this past week, I have been getting various photos from growers of issues they are seeing in their fields, including certain “disease issues” that are definitely favored by wet conditions. And, yesterday, I received shots of some very low vigor Camarosa plants in South Carolina that may have been socked pretty good by those  arctic clippers back in January and February. We’ll be sharing some of these reports and photos in the early week. But, for now, let’s consider the Weather Outlook for our region.

Part 2. So, what kind of weather we can anticipate in the final days of April, and then into Mother’s Day weekend (May 9-10)?

I am personally hopeful it will be far less active than last week, and I am glad to note that things will be warming up some after this remarkably COLD weekend. In a nutshell,  the general weather pattern for our region (VA-TN-NC-Sc) is expected to change to  favor  near to slightly above normal temperatures by the end of this week. The slightly warmer and drier than normal  pattern is then expected persist  for at least the next 10 days.

Forecast discussion day 3 – 5:  (29 Apr – 01 May) Temperatures near normal; scattered showers mid period.  A seasonably cool air mass will settle into the eastern US early in the period under a general northwest wind flow.  This will keep temperatures near to slightly below normal early in the period but will warm a couple of degrees each day.  A low pressure system is expected to move to the southeast coast and then out to sea bringing periods of light rain to the southern and eastern half of the region.  High temperatures are expected to range from the mid 60s to low 70s.  Low temperatures expected to be in the mid 40s.   Total precipitation amounts in the 0.10” – 0.20” range.

Forecast discussion day 6-8:  (02 May – 04 May) Temperatures warm to slightly above normal; showers late. A slow moving high pressure system is expected to move in from the west during the period. This will keep things mostly dry and allow the daytime temperatures to slowly warm to slightly above normal by the end of the period. Slight chance of showers in the northwestern sections of the region by very late in the period as a front approaches from the west. Overnight temperatures will remain near or slightly below normal. High temperatures are expected to range from the low to upper 70s.  Lows in the upper 40s to mid 50s.  Precipitation amounts expected to be light in the 0.00” – 0.10” range.

Forecast discussion day 9 – 11: (05 May – 07 May) Temperatures stay slightly above normal; turns wet by mid period.  A warm air mass will move into the eastern US under a general southwest wind flow as the slow moving high pressure system moves off shore.  A cold front is expected to approach the region by mid period bring a chance of showers and thunderstorms.  High temperatures are expected to range from the high 60s to high 70s.  Low temperatures expected to be in the low 50s.   Total precipitation amounts in the 0.20” – 0.40” range.

Chart 4. Valid through May 9 (Saturday).

Forecast discussion day 12 – 14:  (08 May – 10 May) Temperatures near normal; showers mid to late in the period. A slow moving low pressure system is expected to form in the Wyoming region then slowly move northeastward into the Dakotas.  The VA-TN- NC- SC region is expected to be under high pressure and the warmer southerly flow side of this low pressure system.  This will allow temperatures to remain near to or even slightly above normal.  Periods of widely scattered light showers are possible from mid to late in period.  High temperatures are expected to range from the mid to upper 70s.  Lows in the upper 40s to upper 50s.  Precipitation amounts expected to be light in the 0. 05” – 0.15” range.

Outlook discussion day 15 – 22:  (11 May- 18 May): Seasonably mild.  Expect this period to continue to see near to slightly above normal temperatures.

I would like to say that I know there is nervousness “out there” about having berries ready for Mother’s Day Weekend.   Last evening I received this note from a concerned VA grower who has already been checking the temperature forecasts of a number of weather services, and here is what he had to say this weekend:

Base 50 degrees? Yeah, right!  Right now, 7:18 p.m. Saturday, it is 46.9 F in Pungo and 46.0 in Chesapeake.  So it looks like by the end of today we may have accumulated no GDD.Wunderground and my home thermometer said our morning low was 45 degrees and that our daytime high was just 57.But we have had more hours today under 50 than over 50, and only an hour and a half above 55!

So while a high/low calculation might say we had 1 GDD today, if you net the hours above/below 50 we would actually come out negative.

Our strawberries are standing still. Actually, there is slight movement. It’s called shivering!

I found our first ripe Chandler on Wednesday and also our first three “Chandler-ripe” Camarosas (not yet “Camarosa-ripe”) – both at Pungo, nothing then at Chesapeake and I think you’d have to look hard to find anything red in Chesapeake today (I fertigated there today but didn’t “look” as it was raining).

We had hoped to open next weekend (either May 2 or 3) for a very limited picking, but with the current forecast, that looks extremely doubtful.

The following week looks to be much warmer, mostly mid-70s to low 80s, so maybe, just maybe, we’ll have decent picking on Mother’s Day weekend?????

We need picking to begin because we need some MONEY!

Editor’s note:  I did do some checking on GDD accumulations, and using some high/low numbers from AccuWeather, this is what I came up with in terms of GDD units between today and Friday, May 8: 155.5 GDD Units

In my experience you really need a good 125 GDD units from the time you start picking a “few berries” (like Tom has been), to really being able to get open. So, I am encouraged about the outlook for Mother’s Day weekend, but I would be very cautious about May 2-3.

Have a good evening and week! Warmer days are ahead!