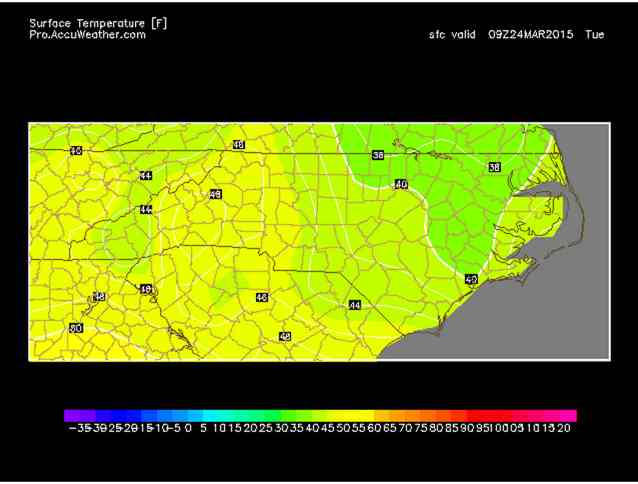 Fig. 1. At 6 a.m. today the “green” areas on this map had the lowest temperatures in the state. It will be interesting to get some feedback from growers who actually may have seen frost this morning.

At 6 a.m. we had cloud cover and slight winds in Raleigh area, and NO FROST. But, there was NOT a forecast for frost in this area by AWIS yesterday.

However, in areas east of Raleigh, like Rocky Mount/Wilson, there was a forecast of FROST at 5 a.m. this morning (published on this blog yesterday). What actually happened?

Well, this is where you come into the picture!  If you are a grower in this region Rocky Mount/Wilson, for example, did you see what AWIS says below? They were calling for frost at about 4 a.m.?

Table 1. According to AWIS, this area of the state saw a frost at about 4 a.m. and had minimum this early morning of 33 F.

Here is another interesting comparison – two different Goldsboro locations:  this first location  had frost (according to AWIS) this morning at 5 a.m. (Table 2).

Table 2. According to AWIS this Goldsboro location had a frost event this morning

This Air Force Base location (Goldsboro) did not!

Table 3. Note that winds were same at 4 a.m. as Table 2, but winds stayed at about 3 mph for this location through the rest of the early morning. More importantly, the minimum temp was 38 F (vs. 35 for the other Goldsboro location).

How many per plant (average):

6. Bonus question:  what was your minimum canopy temp this morning according SkyBit? ________

Here is a summary Weather across NC this morning at airports from AccuWeather:

You may click on the town/city nearest your location to see what AWIS is indicating for your FROST situation this morning:

Thanks for taking time to provide me with this valuable feedback today!