Find this article at:
go.ncsu.edu/readext?223521
— Written By Hannah Burrack and last updated by Barclay Poling 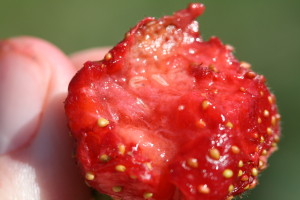 We have been conducting research trials on spotted wing drosophila (SWD) in strawberries at the Central Crops Research Station in Clayton, NC this year, starting in April.

We caught our first adult SWD flies in these plots on April 18th, but we didn’t find the first larvae in fruit until May 2nd. Even though larvae were found in fruit relatively early, they were present in very low numbers for all of May, less than 1% infestation, and some plots had no detectable larvae. We are very close to the end of our experiements, as our plants are starting wind down fruiting, but samples from the last two weeks have had higher SWD infestation rates. Last week, one of our untreated plots had 21 larvae in 15 berries, and this week, we found 14 larvae in one 15 berry sample, also from an untreated plot. In some of our treated plots (and even some untreated), SWD infestation remains undeteable, so although activity is increasing, it is not necessarily uniform.

SWD are likely to be most significant in strawberries later in the season, so it may be less important to aggressively protect them during the first weeks of harvest. We’ll revisit this idea when making recommendations for 2014. SWD are also likely to be a bigger issue in day neutral strawberries. In fact, this was one of the crops where we found the first reproducing population of SWD in North Carolina in 2010. Finally, this also suggests that SWD populations are higher moving into our later crops, such as rabbiteye blueberries, blackberries, and raspberries.