Find this article at:
go.ncsu.edu/readext?309
— Written By Barclay Poling

Freezing injury in strawberry is easily seen by cutting the crowns length-wise. In this video we demonstrate this technique to help you assess whether the strawberry plant crown has been injured by cold weather in late fall and/or winter. Strawberry plants are quite resilient, and even if you see evidence of internal cold injury to crown tissues, do not automatically assume that there will be a serious crop reduction. Use a fairly sharp knife to cut length-wise through the crown (north-south cut). In preparing to make this cut, it is recommended that you first remove both the attached leaves and roots, as shown in the video.

Crown structure: The strawberry crown is actually a much shortened plant stem. The central part of the crown, called the pith, is made up of large cells which are easily injured and turned brown by the formation of ice crystals in late fall and winter. In Figure 1 you can see a crown that had “light injury” to the pith from a late November cold snap. Light injury of this kind will not impact crop potential. Fig. 1. This plug plant had light crown injury (see darkened area in photo) from a late November freeze episode in Clayton, N.C. Normally, the central pith tissue is ivory white in color. After about 30 seconds, the entire pith tissue will become darker in appearance. So, you need to look “right away” to make an assessment of whether cold injury may have occurred. 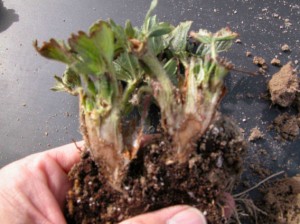 The narrow cambium layer outside the pith (Figure 2) does not seem to be injured quite so readily by freezing as the central pith. But, if the cambium layer has a dark appearance (usually brown), then this indicates that the plant has been more seriously injured by cold conditions. Figure 2. This strawberry plant has been more seriously injured by a winter freeze (January 2005), and here you can see that the cambium layer outside the pith has turned brown – indicating serious plant injury to the cambium. The cambium is an important water and food conducting tissues of the plant. Several weeks following a cold event of this type, you may cut open another crown and notice that there is “new cambium” forming. New cambium will be white in color, and this is a sign that the plant is likely going to recover. If new cambium does not form the plants may die.